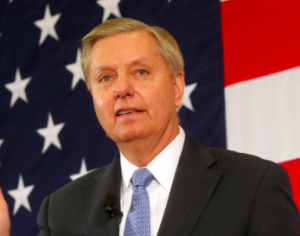 When I began this post, several days ago, I never even though about the fact that it would be scheduled for today. My nephew, Dustin Boulden, is scheduled to marry Meredith Heath at six this evening, in Memphis. They have my prayers.

I have a lot in common with Lindsey Graham. We both grew up within about 30 miles from one another. We are political allies. We lived in the same county. I was his GOP county chair when he ran for Congress the first time. We share some of the same friends and acquaintances. We both love the Lord. His former (as in retired) law partner and his wife and my parents were the best of friends. Fact is, when my sister and I were growing up, they were our ‘guardians’ in case of an emergency. Our biggest difference is that I went to Clemson and he went to Carolina. In South Carolina those are fighting words, trust me. But, we are also part of a minority status. Neither one of us have been married. You would think, this day and age, that would not be a social and cultural crime, but it is. Fortunately, Lindsey is male. It isn’t as bad when you are a man. When you are female, by the time you reach my age, you are a social and cultural pariah.

We live in a strange world, today. Once upon a time, being a life-long bachelor, was a noble occupation. In England, there were entire clubs, stuffy, full of cigar smoke, good cognac, newspapers, and a heaping helping of misogyny. It is the stuff of a good Sherlock Holmes mystery, Henry Higgins, and just reeks of the stodgy old English gentleman. He would have served his country in some far off exotic land like Egypt or the Subcontinent. Home, the older brother was married, and the new wife did not want the brother-in-law underfoot all the time. So, he moved into his club. He went to the races, gaming clubs, musicals, and hung around the stage door of Covet Garden. They were the stuff of legends. Picture C. S. Lewis and his buds, the Inklings.

There was nothing wrong with it. Now, though, you would think it is the end of the world as we know it because Lindsey Graham is running for POTUS and isn’t married. Let’s be honest here, some people are being down right vicious about it, but then again, they hate Lindsey because he’s who he is.

We’re being slammed with shouts that he is a misogynist because he isn’t married. There are even debates about a person being required to be married to be POTUS. What I do find fascinating is that the very group of people who demand recognition for non-traditional families are the ones damning Lindsey the most. It is rather strange. I’ve been learning, recently, that those on the left are as rude and irrational as those on the far right. Ironically, they appear to be as demanding of marital status as the far right.

“…single people are viewed as lesser and more incomplete people than their counterparts who are married. There is the underlying presumption that in order to be happy and fulfilled, everyone should be married. They are further viewed as less responsible and mature than those who are not single. There are still pejorative and negative to being single which is totally antiquated and untrue. Being single is just as a viable, valid, and optional lifestyle choice as being married.

I am curious as to when the Constitution was rewritten to require the President of the United States be married. According to Article II of the Constitution, the person must be a natural born citizen, not born in say Mexico or Canada. They must be 35 years old. That’s it. There is absolutely nothing in the Constitution about a person being married. Granted, now there are some psychologists who are trying to state that those of us who have never married are somehow abnormal, and are lacking in social skills. The fact is, there are a heck of a lot of us in this country. We’re not abnormal. We’re picky, cynical, and may be the walking wounded. Increasingly large numbers of hard-core far right churches see the state of being single as something that is against nature. We are discriminated against.

I don’t know about men, but when I turned forty, I became a social pariah. When you are over forty and single, you are no longer allowed a social life. Your friends do not invite you to parties. You aren’t invited out to dinner with friends. That is reserved for couples only. You are not allowed to be in organizations. Forget being an officer of your church. You are a single woman. There are no movies, no dances, and no invitations. Don’t even think of hosting a dinner party. No one will bother. If you have no children, it is even worse. It is extremely lonely. You feel like people are looking at you as if you are abnormal.

I am not single by choice. I’d love to be married, but from what I’ve seen of this world, at least I’ve not been abused. I have no snotty children to deal with. I refuse to put up with a man who is going to be abusive, or make demands on my life. I happen to think my life is just as important as is a the life of a man. If I ever do reach that state there are two words: Pre Nup.

“…At the same time, the spokesman for the sitting president slammed Graham while fielding a question about the senator’s Daily Mail Online interview, saying that he couldn’t ‘imagine’ the Republican occupying the White House with or without a first lady…”