Anatomy of a Mitt Romney Lie 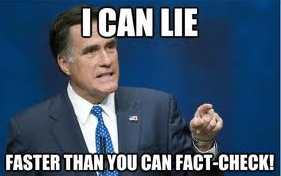 I go back to what I have said for years:

QUESTION: How do you know Mitt Romney is lying? ANSWER: His lips are moving.

Mitt Romney is already lying about the speech he gave in Israel. Let’s face it, Rush Limbaugh can put lipstick on this pig of a trip as much as he wants, but it has been a disaster. Oh, the right is going to clean up after Mr. Perfect. They’re going to smile and lie through their teeth. That’s the problem. They’re lying to themselves and everyone else. They’ve spent so much time picking up after Romney that they’ve just about lost any credibility they once had.

Josh Marshall has it nailed. And, he makes fun of the conservatives pandering for Mitt.

This is NOT a great speech. It is insulting and pandering on so many different levels. It is disturbing. This man has no grasp on the realities of life.  This is a copy of the full text.  He was discussing Palestinian culture.

There’s a problem here.  I hate to mention this because I will be damned, but Israel is not a great “culture” in the way Mitt is attempting to use the Landes theory.  Israel today is a new nation with a new cultural heritage of its own.  BUT, the ancient Hebrew culture Romney may be trying to discuss, but is incapable of doing so because he is incapable of abstract thought, is part of the larger ancient Middle Eastern fabric as a whole. So are the Palestinians.

A person, scholar, political candidate is a fool to say that one culture is better than another.  Cultures are different.  If one were to use Romney’s criteria for what a successful culture is, then every single Native American culture in this country is a failure.  If nothing else, the speech he gave shows how shallow the man is and how completely insulated he is from experiences other than his own platinum spoon existence.

In this country, though, thanks to the absolute ignorance of people like Rush Limbaugh, Sean Hannity, and their followers, one must not use the term “muli-cultural”.  It is liberal, socialist, evil. Because these individuals have rejected anything that is not part of their very strange and very limited world view, this nation is being taken down to its lowest common denominator – nothing but strip mall trash.

They are so ignorant they don’t comprehend that there are different cultures within the Muslim religion.  They are simply told to hate.  I suspect when Romney was damning the Palestinian culture, he was taking a slam at Islam. His libertarian supporters hate the Muslim religion with a passion.  It has no right to exist.  What their ignorance doesn’t understand is that not all Palestinians are Muslim.  Many are Catholic.

“…I was thinking this morning as I prepared to come into this room of a discussion I had across the country in the United States about my perceptions about differences between countries.

And as you come here and you see the GDP per capita for instance in Israel which is about 21,000 dollars and you compare that with the GDP per capita just across the areas managed by the Palestinian Authority which is more like 10,000 dollars per capita you notice a dramatic, stark difference in economic vitality. And that is also between other countries that are near or next to each other.

Chile and Ecuador, Mexico and the United States. I noted that part of my interest when I used to be in the world of business is I would travel to different countries was to understand why there were such enormous disparities in the economic success of various countries.

I read a number of books on the topic. One, that is widely acclaimed, is by someone named Jared Diamond called ‘Guns, Germs and Steel,’ which basically says the physical characteristics of the land account for the differences in the success of the people that live there.

There is iron ore on the land and so forth. And you look at Israel and you say you have a hard time suggesting that all of the natural resources on the land could account for all the accomplishment of the people here.

And likewise other nations that are next door to each other have very similar, in some cases, geographic elements. But then there was a book written by a former Harvard professor named ‘The Wealth and Poverty of Nations.’

And after about 500 pages of this lifelong analysis—this had been his study for his entire life—and he’s in his early 70s at this point, he says this, he says, if you could learn anything from the economic history of the world it’s this: culture makes all the difference.

Culture makes all the difference. And as I come here and I look out over this city and consider the accomplishments of the people of this nation, I recognize the power of at least culture and a few other things.

One, I recognize the hand of providence in selecting this place. I’m told in a Sunday school class I attended— I think my son Tagg was teaching the class. He’s not here. I look around to see. Of course he’s not here. He was in London.

He taught a class in which he was describing the concern on the part of some of the Jews that left Egypt to come to the promised land, that in the promised land was down the River Nile, that would provide the essential water they had enjoyed in Egypt.

They came here recognizing that they must be relied upon, themselves and the arm of God to provide rain from the sky.

And this therefore represented a sign of faith and a show of faith to come here. That this is a people that has long recognized the purpose in this place and in their lives that is greater than themselves and their own particular interests, but a purpose of accomplishment and caring and building and serving.

There’s also something very unusual about the people of this place. And Dan Senor— And Dan, I saw him this morning, I don’t know where he is, he’s probably out twisting someone’s arm—There’s Dan Senor, co-author of ‘Start-up Nation,’ described— If you haven’t read the book, you really should— Described why it is Israel is the leading nation for start-ups in the world.

And why businesses one after the other tend to start up in this place. And he goes through some of the cultural elements that have led Israel to become a nation that has begun so many businesses and so many enterprises and that is becomes so successful.” 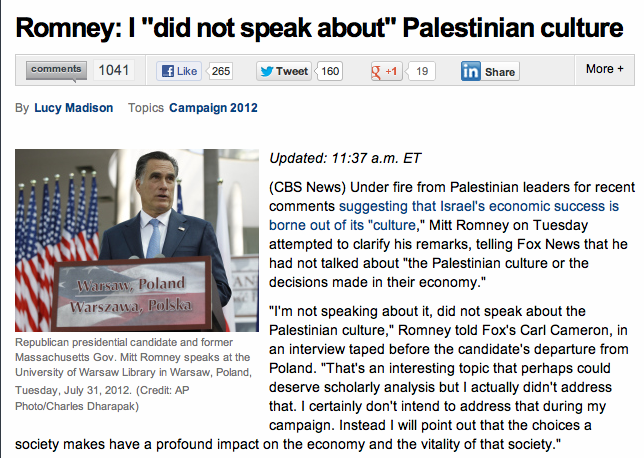 Then, he said he did not say this.

“I’m not speaking about it, did not speak about the Palestinian culture,” Romney said during an appearance on Fox News. “I certainly don’t intend to address that during my campaign. Instead I will point out that the choices a society makes have a profound impact on the economy and the vitality of the society.”..”

Mitt follows it by an absolutely disgusting op-ed in the National Review (all Romney all the time).   The man is completely ignorant of anything of real value when it comes to historical knowledge.

“...During my recent trip to Israel, I had suggested that the choices a society makes about its culture play a role in creating prosperity, and that the significant disparity between Israeli and Palestinian living standards was powerfully influenced by it. In some quarters, that comment became the subject of controversy.

But what exactly accounts for prosperity if not culture? In the case of the United States, it is a particular kind of culture that has made us the greatest economic power in the history of the earth. Many significant features come to mind: our work ethic, our appreciation for education, our willingness to take risks, our commitment to honor and oath, our family orientation, our devotion to a purpose greater than ourselves, our patriotism. But one feature of our culture that propels the American economy stands out above all others: freedom. The American economy is fueled by freedom. Free people and their free enterprises are what drive our economic vitality.

The Founding Fathers wrote that we are endowed by our Creator with the freedom to pursue happiness. In the America they designed, we would have economic freedom, just as we would have political and religious freedom. Here, we would not be limited by the circumstance of birth nor directed by the supposedly informed hand of government. We would be free to pursue happiness as we wish. Economic freedom is the only force that has consistently succeeded in lifting people out of poverty. It is the only principle that has ever created sustained prosperity. It is why our economy rose to rival those of the world’s leading powers — and has long since surpassed them all….”

It also tells us something about Mitt Romney.  When backed into a corner he comes out spewing platitudes about economics.  His followers are so brainwashed against anything that might now reek of unbridled capitalism that they fall for it, every time. 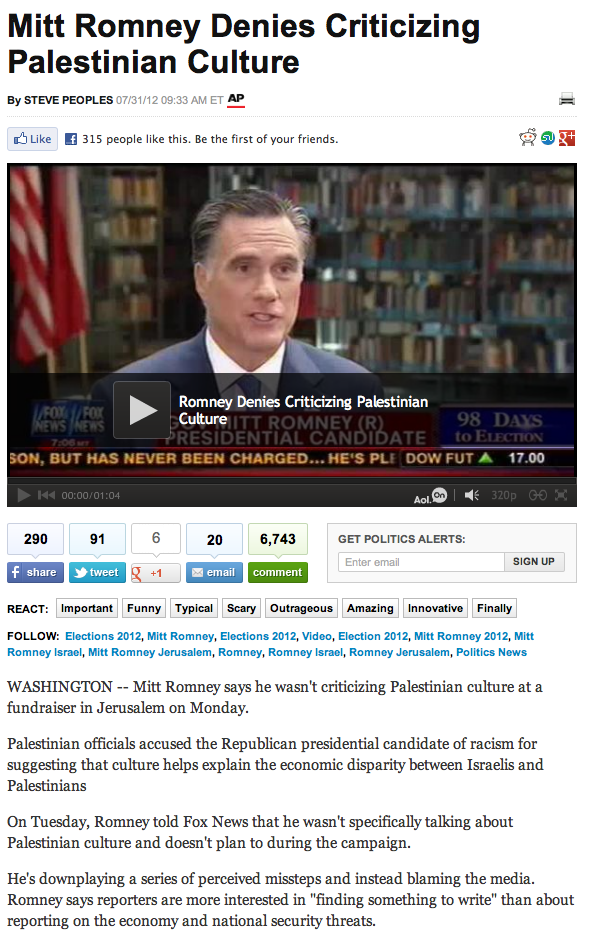 On Tuesday, Mitt Romney was caught lying.  It doesn’t really matter if he was caught or not.  His supporters will lie to protect him.  If you try to mention the lies, well, since Romney has spun it into an economic conversation, once again, those of us who are sick and tired of this will be accused of being socialists.

I’m sick of this.