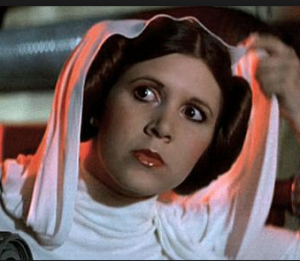 Between elementary school and high school a girl’s self-esteem drops 3.5 times more than does a boy’s.

When a boy and young man asserts himself, it is called leadership.  When a girl and a young woman does the thing, it is called ‘bossy’.  At an early age boys are indoctrinate to take charge of their world.  Girls, when they attempt the same thing, are berated.  Like I was, don’t even bother raising your hand in school.  Give the guys a chance.  Bright girls are still being told to sit down, shut up, and let the guys answer questions, no matter how stupid the guys are.

A few weeks after the first Star Wars movie premiered, some of the guys I went to college with were doing Sunday lunch.  Geeks all, they could talk about nothing but Star Wars.  They could also talk about nothing but how much I looked like the Princess and even acted like her.  My mother thought it was so sweet.  One of the guys had a thing on me.  I thought it was great.  Then, in June, when my sister and I were living in our apartment in Atlanta we went to a matinee with my childhood best friend, our cousin, Linda, and a neighbor.  As an aside I will mention that almost immediately after those immortal lines, “Han Solo, here.” that I hissed the guy playing Han Solo was going to be one of the greatest stars – ever.  Was I right, or was I right?

So, we get into the rescue of Princess Leia.  My sister is hysterical.  “Yep, you’re just like her, bossy, opinionated, telling everyone what to do and how to do it.”  That was and still is my reputation.  I’ve since added bitch to my list of virtues.

My sister and I were raised by what can only be described as a very bossy woman.  Her mother was bossy.  Her sisters took after their mother.  My father’s family was infamous for the strong women who populated it.  We’ve all been known to excel in both bossy and drama queen.

There are so many delicious ironies here.  There is a move to “Ban Bossy”.  I disagree.  I don’t think that there is anything wrong with that word.

“…When a little boy asserts himself, he’s called a “leader.” Yet when a little girl does the same, she risks being branded “bossy.” Words like bossy send a message: don’t raise your hand or speak up. By middle school, girls are less interested in leading than boys—a trend that continues into adulthood. Together we can encourage girls to lead….”

When I was growing up, girls were encouraged to be bossy, out-spoken, and to take no prisoners when dealing with boys.  We were encouraged to be leaders.  I was growing up in Oconee County, South Carolina.  During the a period from the Nixon years, through the 1980 election, the county GOP was chaired by a series of very strong women.  There were no differences when we were encouraged with careers.  Women could do anything.  This continued into the early 1990s, but then, there was a subtle change.  Suddenly, in the GOP, there in Oconee County, women were expected to man the punch bowl and bake cookies.  I refused.  By the time I moved to New Mexico, women baked cakes, sold cookies, did Octoberfest, had fashion shows, and did the whole women’s GOP thing.  But, women priests were welcome in the Episcopal Diocese of the Rio Grande.

Women could be astronauts.  They could run for office, and run Fortune 500 companies.  I never heard of Christian submission and patriarchalism until recently. I knew it was rampant in the conservative Presbyterian independent churches.  I was aware there were women who quietly worshiped their spouses.  I just thought they were stupid.  I never realized it was an entire movement.  According to author, Jennie Chancey, daughters shouldn’t not have an education but should it to advance their homemaking skills.

“...The patriarchy community, however, is dedicated to building up its own, purist alternatives to the interaction mainstream society provides. Vision Forum gears its entire Beautiful Girlhood catalogue collection—replete with tea sets, white gloves, “modesty slips,” and Victorian manners books—to the proper raising of daughters in the faith. Both Vision Forum and Reconstructionism’s Chalcedon Foundation sponsor girls’ essay contests on subjects such as fulfilling one’s vocation as a daughter and the enduring appeal of Elsie Dinsmore—a heroine in Martha Finley’s Victorian-era children’s book series, an obedient and priggishly pious daughter of the Antebellum South who aspired to be a submissive daughter and wife. (Dinsmore, as one contest winner wrote, shows daughters how “to rise up by stepping down.”)

Elaborate courtship mechanisms are being worked out by fathers hoping to make alliances through the marriages of their daughters to the sons of men in the fold. And home business projects, largely home-based sewing businesses that produce modest clothing or home decorations, are cropping up among young daughters of the movement to such an extent that in 2007 homeschooling leaders James and Stacy McDonald urged homeschooled daughters to consider signing up with a new young-woman’s home business ministry, the Proverbs 31 Project (after the biblical verse, “who can find a virtuous woman, for her price is above rubies.”) The project, evoking the many virtues of the storied Proverbs 31 woman, is a Mary Kay-like franchise that promises to help young daughters “build a business for herself around the use of therapeutic-grade essential oils,” thereby helping her find a way to bring a home business into her marriage, making her a more attractive prospect to potential suitors….”

R. C. Sproul Jr. likes to tell about a 9-year-old daughter of a family, friend – who did not know how to read.  FYI – he also was known to beat and abuse his late wife.

“...Are you thinking, “Mercy, what would the superintendent say if he knew?” . . . But my friend went on to explain, “She doesn’t know how to read, but every morning she gets up and gets ready for the day. Then she takes care of her three youngest siblings. She takes them to potty, she cleans and dresses them, makes their breakfasts, brushes their teeth, clears their dishes, and makes their beds.” Now I saw her, rightly, as an overachiever. If she didn’t know how to read but did know all the Looney Tunes characters, that would be a problem. But here is a young girl being trained to be a keeper at home. Do I want her to read? Of course I do . . . . But this little girl was learning what God requires, to be a help in the family business, with a focus on tending the garden….”

It all began in the early 1960s, when Helen Andelin, a young LDS wife from Utah, wrote Fascinating Womanhood, which was basically a Mormon woman’s response to Betty Friedan’s The Feminine Mystique.  Her anti-feminist leanings found an audience with the nascent patriarchal dominionist movement in conservative Christian circles.  In order to further adapt the anti-feminist theories of Andelin, various far right conservative Christians, including the Southern Baptist Convention, and their Council for Biblical Manhood and Womanhood have had to adopt various Mormon theological points.  In doing so, Christian theology, which has been in place for two thousand years, is being subordinated by questionable Mormon theology, with a hybrid blending of the two.  Today, the Council for Biblical Manhood and Womanhood is experimenting with the LDS theology that states families will be together for eternity.   They are also experimenting with the theory that only women who have children will go to heaven.  The Doug Phillips bunch are now preventing women from directly having communion.  Men are the representatives of God, the high priest of their home.  As the high priest, they go directly to God, to intercede for the women in their lives.

This is the world that is now trying to destroy the hopes and dreams of girls throughout the nation.  Women like Nancy Campbell and Debi Pearl with their dubious blend of Calvinist, psuedo-Christian, and a little dab of Mormonism are openly teaching that the role of the girl, the young woman, the wife, is in serving the needs of her husband.  Girls are there to serve their fathers’ needs.

Frankly, I don’t want to ban the word “bossy”.  I want it to be empowering for women!