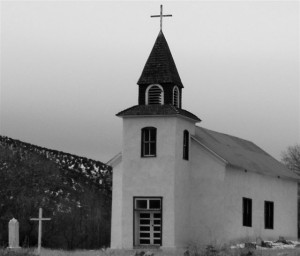 “...Dominion Theology or Dominionism is the idea that Christians should work toward either a nation governed by Christians or one governed by a conservative Christian understanding of biblical law. It is a form of theocracy and is related to theonomy, though it does not necessarily advocate Mosaic law as the basis of government. Prominent adherents of Dominion Theology are otherwise theologically diverse, including the Calvinist Christian Reconstructionism and the charismatic/Pentecostal Kingdom Now theology and New Apostolic Reformation…”

In 2012, the United States ranked 50th in maternal mortality rates, which has doubled in the past 25 years.  There are 49 countries which have lower maternal mortality rates.  The ACA requires coverage for pregnancy and for women, things that have rarely been covered.  Most insurance policies in this country do not cover pregnancy.  If a woman is without resources, that’s her problem.

“...A cult of masculinity has been asserted. A cult that disdains women’s equality, would take control of their bodies, make them subservient to their spouses, refuse them birth control and even take away their right to vote. In our Macho culture, where a male who earns little is scorned; is perpetually afraid of losing his job; yet is nevertheless encouraged to “be a man”; the need to find someone to blame, or something to empower him is overwhelming. In some Churches that preach he is his wife’s boss and those values of macho masculinity are his right/heritage, many men find succor. What has helped with this is the reinforcement of outlets like FOXNews and clever campaigns of propaganda sponsored by billionaires, who are the people actually repressing them….”

The idea is to force the Dominionist world view on everyone, no matter what they believe. In order to conquer the world for Christ, and bring about  a Christian theocracy in this nation, everyone is required to submit to the whims and demands of the theocratic leaders, individuals such as Michele Bachmann, David Barton, Rand Paul, Ron Paul, Ted Cruz (and his insane father), Rick Santorum, Mike Huckabee, and their irrational demands.

Evidently one of the reasons the extreme right doesn’t care for the ACA is because it offers help to women, requiring care that is needed.  The state of women’s healthcare in this nation is disgraceful.   The far, libertarian right has this view that all women want is birth control and abortions on demand.  They have decided that birth control is now evil, that the pill is basically an abortion, and that goodly Christian businessmen should NOT be required to pay for things that bother their good Christian faith. 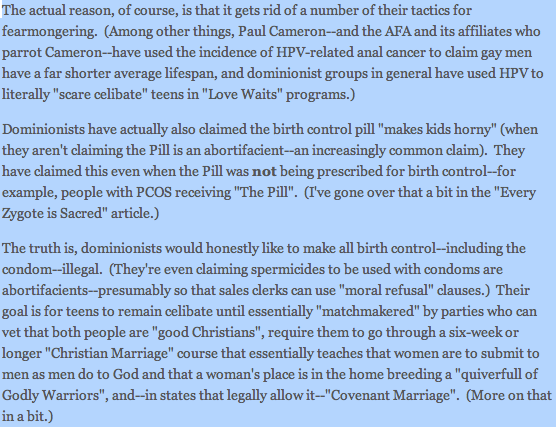 According to Rush Limbaugh:

“…Obama has things exactly backwards.  Insurance is being stretched to cover things it should never have to cover and it didn’t have to cover until Obamacare came along and mandated these things get covered, and all it does is drive up prices like breast pumps and birth control pills and wellness plans.  I mean, it’s all of that stuff, all of this touchy-feely liberal do-good stuff that ought never be part of insurance policies. Buy your own birth control pill! Buy your own breast pump!That’s not a health issue.  It used to be our choice to go out and by a birth control pill or not. It used to be our choice to go out and buy a breast pump. If you want that, pay for it yourself.  But no! These things are now part of insurance.  It’s not insurance. It’s welfare.”…” 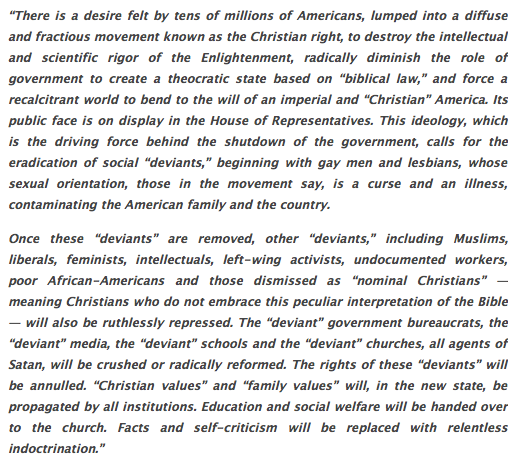 These are the same men who get free Viagra, prostate screenings, and testing.  Studies, for years, have shown that there is a preference for men’s health care,  with women being superfluous.  Evidently, men like Rush Limbaugh think that all a woman needs is to buy birth control pills.  They have no grasp on the fact that, in order to get those pills, a woman must submit to what can be a painful, humiliating, and invasive physical.  Needless tests are added to the cost of the exam, to pad the pocket of the physician.  A yearly visit, to get a prescription for something that should be over the counter, can run anywhere from $400 – $900 dollars.

“...Proponents of this idea (such as David Barton and D. James Kennedy) argue that the Founding Fathers of the United States were overwhelmingly Christian, that founding documents such as the Declaration of Independence and the Constitution are based on Christian principles, and that a Christian character is fundamental to American culture. They cite, for example, the U.S. Supreme Court’s comment in 1892 that “this [the United States] is a Christian nation,”after citing numerous historical and legal arguments in support of that statement…”

Limbaugh, and the far right is pissed because women now get equal time.  Health plans MUST include – at no co-pay: 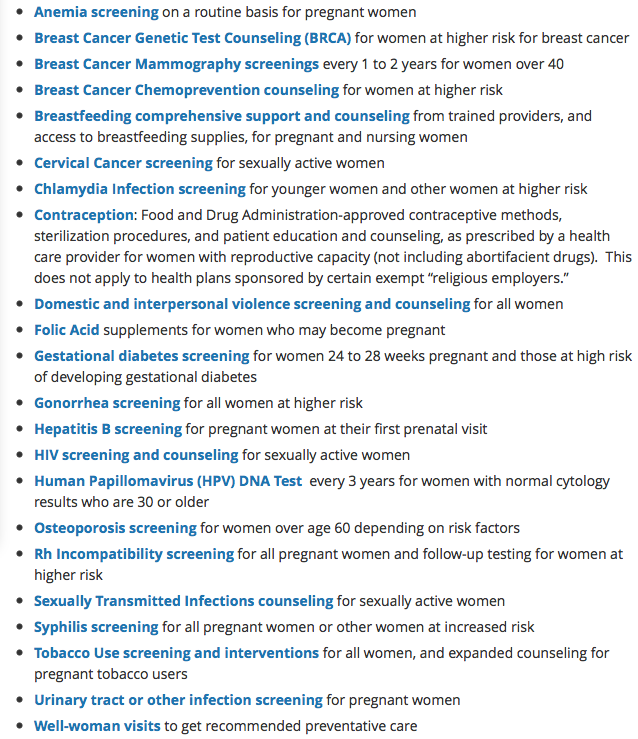 Americans Against the Tea Party

What is a Prairie Muffin? I borrowed the term from R.C. Sproul, Jr. who jokingly and lovingly called his wife a Prairie Muffin (note: R.C. Sproul, Jr. has nothing to do with the writing of this manifesto). This was in response to those who make snide and derogatory remarks about those of us who choose a quiet life, diligently pursuing our biblical role as women and protecting the innocence of our children. Some women have been caricatured as denim jumper-wearing, Little House on the Prairie-worshiping, baby machines who never trim their hair or wear makeup. Like the Americans who bore the name Yankee Doodle as a badge of honor rather than be cowed by the enemy who used it in a derogatory way, the name Prairie Muffin is meant to convey the message that we are sticking to our convictions despite the silly labels people try to stick on us.

2) Prairie Muffins are helpmeets to their husbands, seeking creative and practical ways to further their husbands’ callings and aid them in their dominion responsibilities.

3) Prairie Muffins are aware that God is in control of their ability to conceive and bear children, and they are content to allow Him to bless them as He chooses in this area.

11) Prairie Muffins own aprons and they know how to use them.

18) Prairie Muffins are fiercely submissive to God and to their husbands.

19) Prairie Muffins appreciate godly role models, such as Anne Bradstreet, Elizabeth Prentiss and Elisabeth Elliot. They do not idolize Laura Ingalls Wilder (Little House on the Prairie) or Louisa May Alcott (Little Women); while they may enjoy aspects of home life presented in their books, PMs understand that the latent humanism and feminism in these stories and in the lives of these women is not worthy of emulation.

36) Prairie Muffins are happy to be girls—they rejoice in the distinctives which God sovereignly bestowed on them which make them feminine. They are also happy that their husbands are masculine, and they do not diminish that masculinity by harping on habits which emanate from the fact that boys will be boys, even when they grow up. In addition, Prairie Muffins are careful not to use their feminine, hormotional weaknesses to excuse sinful attitudes and actions, but learn to depend more and more on God’s grace and strength in the midst of any monthly trials...”

People have a right to have and exercise their religious conscience.  But, the reason there is a separation of Church and State is to keep those who want to impose their will on others from doing so.  If a person doesn’t agree with birth control, fine.  But – don’t force everyone else in the country to agree with you and demand the Constitution be violated so you get to practice your version of religion.

There is so much more to the story than Rush Limbaugh and his absolute contempt for women.  I happen to think that men who have such utter contempt for women don’t like them.  The agenda, for the he man women haters is to keep women barefoot, silent, preggers, and serving them.  They don’t care about women.

The way things are going, in this country, the American woman is going to go the way of the women of the Taliban.  It’s already starting to occur.  The other day, Doug Phillips of Vision Forum announced that he had sin.  Too bad it wasn’t with a man.  One woman, defending him wrote the following:

“...Clearly, it is the fault of whomever was supposed to have this woman under the umbrella of his protection. Some father or husband somewhere wasn’t being strict enough. Some father or husband didn’t force Doug Phillips to pass muster with cross-examinations and essays before verbally engaging with his wife or daughter. We know (because Vision Forum tells us) that if a man’s professed theology is in line, everything else will follow with good results. Thus, Doug Phillip’s theology couldn’t have been good enough or strong enough or correct enough. Again, this is not his fault. He is merely a side player in this game, as all men are when it comes to women that belong to other men.

Doug Phillips, in his humble and private repentance before the Lord, has assured us that he has taken up the mantle of fatherhood to his children. He will teach them by his excellent example what it means to be a great man of the faith. He will lead them and his wife, by word and deed, because it is his duty and his sacred calling. No one else is qualified to try to make decisions for his household, not even after he has proven himself to be sinful. All men are sinful! That is not the point. Women and children should obey them anyway. Otherwise, women and children might make bad decisions, like to have inappropriate romantic relationships….”

Don’t ever think this is just about birth control, and the Green family who own Hobby Lobby forcing their dominionist way on the country – well it is.  It is about the total and complete control of women.  If this continues, how on earth can women even live in the theocracy of America?