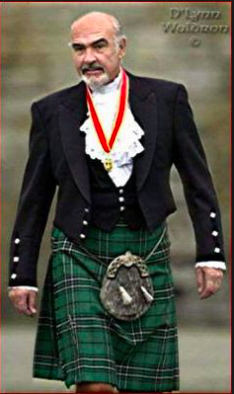 Evidently, among the godly set there in Johnston County, it is not godly for a godly young man to wear an ungodly kilt, or appear dressed in a skirt.  It might reflect badly on everyone.  After all, men who like to dress like women wear skirts and women who like to dress like men wear slacks, right? It is not godly for godly young men to wear a skirt or a dress.  We all know that is on a slippery slope to homosexual behavior, and that is terribly ungodly.  Let’s face it, if you look at the photo on the right, the man is wearing a skirt, and a lace shirt, indicative of non-masculine tendencies, even if it is Sir Sean Connery – the original man’s man, i.e. 007!

“…”Because of this situation we will be making some changes to our policies. Our etiquette agreement is the students’ ticket into the Praise Prom. It must be signed and brought to the Prom. It was created to keep things clear and flowing smoothly for everyone on Prom night. We want to keep things about Jesus, and keep things very simple and straight forward. We support people who want to celebrate their special heritages, and suggest that David and his Mom perhaps create a special heritage night or dance. I’m impressed with David and his energy, creativity and enthusiasm to go to such lengths to convince us to change our policy. I celebrate with him the freedom we have in this country, and exercise mine, as I stand firm in our policy of dress pants, dress shirt and tie only for boys at the Praise Prom. I will reimburse David the cost of his prom ticket, which was $60.00 and wish him well.”…”

As someone who has far more than a wee dram of Scottish blood flowing through my veins, I find

this horribly offensive, bigoted, racist, and abjectly ignorant.  It also reeks of rank discrimination.  Anywhere in the civilized world, a dress kilt is considered formal.  Fact is, I’m a little riled up about this one.  It is a direct, discriminatory attack on my heritage.   When you are of  my heritage, an attack on the kilt is almost akin to a declaration of war.  And, no one knows how to fight and be nasty about it than a pissed-off person of Scottish blood with more than a wee drop o’ the nectar of the land in their bloodstream!

There’s just one little ungodly problem with the self-righteous little group.  Men have been wearing kilts, tunics, robes, ‘skirts’ much longer then they have worn pants.  Dress pants, as we know them, are a very late addition to the male wardrobe.  In fact, today’s version of dress pants were considered terribly risque, and very casual when they were first introduced during the Regency period.  Men still wore knee pants for dress, up until around 1815 or so, when men started wearing trousers for even dress.  Before that, knee pants or britches had been a fashion staple in the Western world for a couple hundred years.  Before they came in vogue, men wore interesting ‘shorts’ which were almost hot pants, with tights.  There were robes, tights, britches, and ‘pants’ for a good 500 years before that trend.  Then it was about tights, robes, and a long tunics over tights.  The costume we now assume was ‘Biblical’ is basically something from the very late Roman Empire and early Dark Ages.  Is was NOT, and I repeat NOT how the Judeans during the time of Christ would have dressed.  What we think of as ‘Christian’ costume, is actually fashion a good 500  years later, if not longer.  To put it in terms for us to consider, 500 years ago, Western Civilization’s costume would resemble that of the court of Henry VIII.

For the first few thousand years of Western Civilization men did not wear slacks, pants, or even 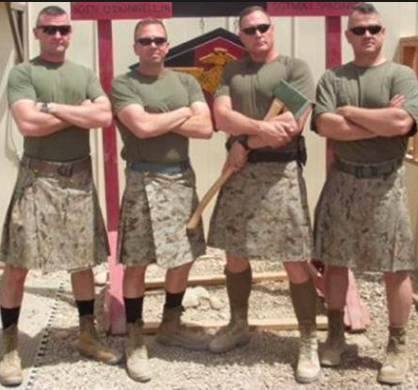 jeans.  They hadn’t been invented.  Real men, you  know, the kind they like to use as examples from the Bible, David, Moses, and so forth and so on, wore tunics, robes, and even early forms of the kilt.  They did NOT though, wear pants.  While we are on the subject, they were probably commando, then again everyone was.  They also had no problem with public nudity.

Anyone familiar with the fashion foibles of the Bible might want to take note that the ancient Judeans were terribly fashion forward.  Aside from ceremonial garb for religious purposes, the ancient Judeans had no real national dress.  One of the frequent laments throughout the Old Testament were the complaints that the Judeans had a very bad habit of adopting the costume of whoever had most recently conquered them.  If we follow this to its logical conclusion, when the Children of Israel fled Egypt, almost every one of them would have been basically naked.  Egyptian slaves were naked.  Their heads were shaved.  They were probably wearing sandals, though.  Because of the custom of societal nudity, there would have been no shame, dismay or even a problem with their nudity.  I suspect it is one of the reasons very specific costuming requirements were established for the priesthood, and for priests entering the Tabernacle. 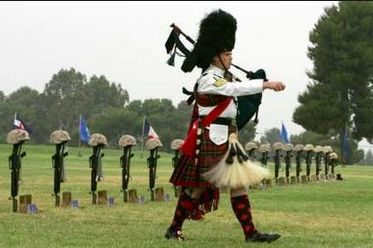 (A little FYI:  Jewish lore and legend states that manna caused chronic constipation.  Can you imagine being lost in the wilderness for something like 40 years, constipated much of the time.  No wonder they were constantly complaining and in such a vile mood.  It could also help explain a few of the nastier episodes of genocide.  When you get tens of thousands of constipated men and women, something’s got to give, literally if not figuratively).

Back to my rant. No one in the Mediterranean region of the Roman Empire, by the time of Christ, had anything resembling a real cultural costume.  Contrary to how we view the ancients, they basically lived in a ‘small world’.  Everyone dressed the same way. When in Rome applied to Judea, also.  They knew fashion.  If we follow that assumption to the logical conclusion, then, unfortunately, were Jesus of Nazareth to attend the ‘Praise Prom’ he would have been denied entry.  His costume would have violated their godly dress code of how godly men should dress. 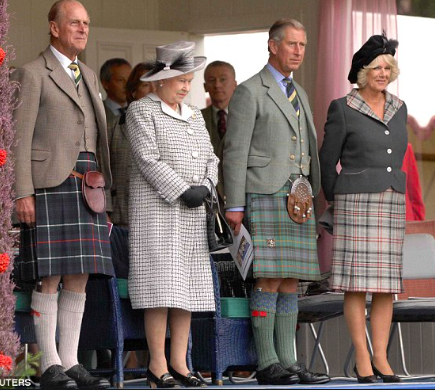 At the age of 16, the young Jesus of Nazareth probably wore a tunic, which was well above the knee.  To wear one too long was the social equivalent of of marrying one’s sister or brother (today).  They did that sort of thing back then, FYI. Over the tunic he might have worn a robe, but probably not.  It was hot back then.  The world’s temperature was a good 2 degrees warmer than it is today.  A young

man of the era would wear a fashionable tunic.  Just because he was from Nazareth was no sign that Jesus was some backwater pumped up version of the creeps of Duck Dynasty, even though they think that someone died and made them god.  Because he was not a Roman citizen, Jesus would have not worn a toga, but because the young Saul of Tarsus was, he could attend the same prom wearing a toga.  It too, would have been misconstrued as a dress.

I gather, there in Johnston County, North Carolina, the godly homeschooling prom committee never realized that, although the Jacobite Uprising of 1745 eventually ended up with the banning of the kilt, and the wearing o’ the tartan Queen Victoria lifted that ban.  Sure, it was after the Battle of Culloden on April 16, 1746, but that was a few years ago.  Even the Royals now wear kilts.  If it’s good enough for the Queen, then it should be good enough for some godly prom nazi. Suggesting that there could be a national heritage day where the kilt is allowed is the height of cultural ignorance and stupidity.  In 2012, a student in St. Louis was suspended for wearing a kilt.  A student in a Utah high school was suspended because he wore a kilt.  He was told it was a sign of cross-dressing. 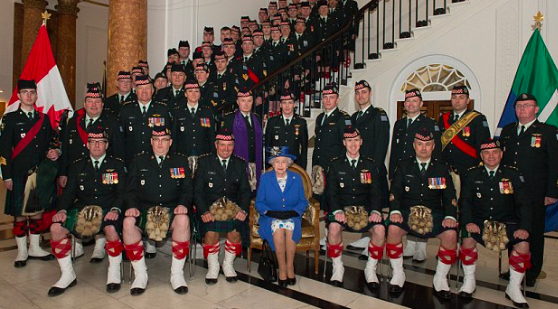 We all know what the problem is here.  It isn’t about the kilt.  This is about a bunch of homophobes who are so full of hatred when it comes to gays and lesbians that they don’t mind walking over the rights of others, including heterosexual young men who are only honoring their heritage.  Funny thing, if it were any other culture, and what they wore would be denigrated, the ACLU would step in and start screaming discrimination.  This was discrimination, not only against MY Scottish heritage, but also unspoken discrimination against the LGBT lifestyle.

And no, a kilt is not a sign of gender-bending, or an alternative life-style.  It is not about less than manly men.  It is worn by some of the bravest men in the military.  I don’t know about you, but this constant hatred by godly men and women, who are only trying to insure everyone live a godly life based on what they consider godly is getting to be a pain.  Once again, their ignorance is showing.

I gather they don’t know who the Black Watch is.  I doubt if they would be allowed into the Praise Prom if they were either in uniform, or their dress uniform, which is a ‘skirt’.  You might also want to note that that these men in so-called skirts were just home from war, manly men, soldiers, fighting and dying for a cause. Yea, I’m mad. The Reidheads came from Findhorn, Scotland.  I am a direct descendant of Robert the Bruce. You don’t get more Scottish than that. When I hear of someone who insults the kilt…!

I’ve been calculating that I’m a good 30% Scotch.  Okay, it’s a joke.  Seriously, my genealogy is something like 50% Norman, 30% Scots, 10% German, with the rest being Anglo Saxon & Celt.  My ex-brother-in-law is 50% Scots.  My two nieces and nephew, when you factor in both sides of the family are a good 40% Scot.  What is now being done to the youth of American, in the snide canard about enforcing a dress code so that young men will wear pants.  In other words, we must sacrifice our heritage so that the vile ignorance and bigotry of so-called godly men and women can discriminate against anyone who might be transgender.  As usual, in doing so, they make fools of themselves.