The Pink Flamingo has thought, from day one, that this alleged war on Christianity is something made up so that the far right, FOX News, pundits like Rush Limbaugh, Sean Hannity, and various organizations can pander too, and further rile up their increasingly brainwashed base.

The right has been brainwashed.  There is no other way to describe it.  They have ceased thinking for themselves.  They do what they are told. It is an increasingly alarming situation.  When those who consider themselves to be the most patriotic became the most brainwashed, it is a recipe for utter disaster.

If I were a Catholic, right about now, I would be absolutely furious with Mitt Romney. As a Christian who happens to believe, very much, in the Sermon on the Mount, I find Romney’s stance on helping those in need, vile and repulsive. Then again, I find the whole tea party anti-Christian, Pro-Rand (who inspired the Book of Satan) to be insulting.

I consider myself a Sermon on the Mount type of Christian.  That means we are to help those less fortunate.  We don’t teat them like dirt.  Evidently there are a few Franciscans who feel the same way.  Heck, what would St. Francis have done about Shamus? 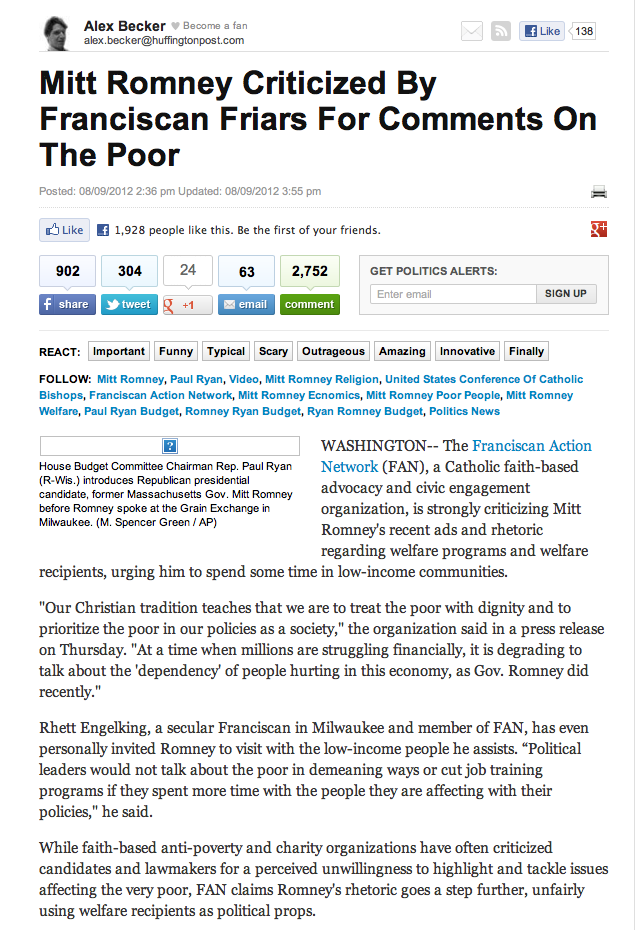 Interesting is the fact that, with all the talk of a Paul Ryan VP slot, the United States Conference of Catholic Bishops don’t exactly like like him.  Then again, John Boehner also criticized the bishops.

“…House Speaker John Boehner (R-Ohio) chastised Catholic bishops at a Wednesday news conference on Capitol Hill, saying they needed to look at the bigger picture after they complained that the GOP budget plan fails to meet “moral criteria.”

The bishops had written letters to Capitol Hill, arguing many elements of the Republicans’ budget proposal, such as cuts to food stamps, harmed the poor while the wealthy benefitted.

“At a time of great competition for agricultural resources and budgetary constraints, the needs of those who are hungry, poor and vulnerable should come before assistance to those who are relatively well off and powerful,” stated one of the letters.

“Just solutions … must require shared sacrifice by all, including raising adequate revenues, eliminating unnecessary military and other spending, and fairly addressing the long-term costs of health insurance and retirement programs. The House-passed budget resolution fails to meet these moral criteria,” they declared in another document.

Boehner, who is a Catholic, acknowledged the bishops’ moral authority but suggested their focus was too narrow as they scolded Republicans over cutting assistance to those who are poor, hungry and homeless.

“I want them to take a bigger look,” Boehner said. “And the bigger look is, if we don’t make decisions, these programs won’t exist, and then they’ll really have something to worry about.”…”

What really annoys The Pink Flamingo is the way Romney has manipulated a magnificent story, making it a hallmark of the right’s absurd Obama war on religion. It’s also using and manipulating the far right against Obamacare’s “war on the Catholic Church” – even though Governor Romney did the VERY SAME THING with Romney care.

“...The ad goes on to show footage of Mitt Romney referencing Pope John Paul II’s opposition to Communism during a speech from his recent foreign trip.

The best part of this is that John Paul II advocated universal heath care for everyone on the planet! Without getting into the subject, John Paul II was extremely liberal when it came so social reform and helping the less fortunate He actually followed the teachings of Christ on the subject. In fact…

“Social thinking and social practice inspired by the Gospel must always be marked by a special sensitivity towards those most in distress. ” (Pope John Paul II)

“...Among the major thrusts of John Paul II’s encyclical were its concern for the poor and its explicit endorsement of the so-called “preferential option for the poor” (n. 11). Thus, when we are reminded that there are almost 50 million Americans without health insurance, and that some 30 million of these are children, we can begin to appreciate the moral urgency of health-care reform.

But there are many Americans — Catholics included — who are satisfied with their own private insurance plans (in spite of continually rising premiums) or with their government-run Medicare or Medicaid. They oppose health-care reform because they worry that it will somehow put at risk what they currently have. Therefore, when it comes to providing universal health insurance, they balk. They ask, why should our tax dollars go to support people (many of whom are African-American and Hispanic-American) who, in their minds, are responsible for their own health care?

There may be operating here a kind of Social Darwinism (“God helps those who help themselves”) that is directly at odds with Catholic social teaching and the demands of the Gospel itself. It is a mentality encapsulated in the crack, “I’m up, pull up the ladder.”

In the same bishops’ annual Labor Day statement released early last month, Bishop Murphy wrote on their behalf: “The Catholic bishops continue to work for health care that is accessible, affordable and respects the life and dignity of every human being from the moment of conception to the moment of natural death.” Indeed, he continued, “Health care is an essential good for every human person. In a society like ours, no one should lack access to decent health care.”

Accordingly, he urged every Catholic “to join the bishops in advocating for health care reform that is truly universal and protects human life at every stage of development” (Origins, 9/17/09).

The Catechism of the Catholic Church had also supported health care for those without access to it: “Concern for the health of its citizens requires that society help in the attainment of living-conditions that allow them to grow and reach maturity: food and clothing, housing, health care, basic education, employment, and social assistance” (n. 2288, my italics)….”

I don’t know about you, but I find this entire “war on Christianity” to be insulting.  When it is being used by an accomplished liar to promote his incomprehensible agenda, it is even worse.

There are times when you would love to see a little lightening bolt from above goose someone in the tush once in awhile.

The far right has embraced the “theology” of Ayn Rand.  Rand was a vile, evil person who had a philosophy on life that inspired the Book of Satan.  She hated Christ.  When the GOP and the so called “Christian” right adopt the evil philosophies that embodied not Christ, but Satanism, they deserve every bad thing coming their way.  Not only has the so called “Christian” right betrayed the trust of the Reagan Revolution, but they are betraying the teachings of Christ.  When you claim to follow Christ and hang with those who follow Satan, you don’t fare very well.  I think we are looking at the beginning of the end of the GOP as we know it.