Why do people, even today, think that the South is more racist than any other part of the country?  Have you stopped to look at the actual statistics?  Evidently the North is more segregated, and more racist than the deep South, even though there are more ‘hate’ groups in the South.  Of course there are. It’s the nature of the beast.  People who constantly denigrate the South, don’t now it.  Every state in this nation has pockets of racism and hate.  To think otherwise is just plain stupid.  If you really want to crunch numbers, you’ll find the worst of the lot are in Idaho, Montana, the Dakotas, and Utah.  They are sparely populated so we just don’t see it.  What you need to understand about the South is the good-old-boy attitude.  While you might find them expressing certain racist tendencies in a corporate setting, get to know people, individually.  You might be shocked.  If you know the South, you know that it isn’t do you have a family member who is gay or lesbian, but which side of the family.  Cousin So-And-So is married to someone of a different race, no big deal.  Oh, but we don’t like Barack Obama – because we’re conservative and listen to FOX News, Rush Limbaugh, and Glenn Beck. It’s not personal and for the most part, it isn’t racist.  It’s liberal vs. conservative.

The Gawker recently did a study on the most racist cities in the US:

States the most plagued by hate:

In 2010, California reported more hate crimes than any other state.  About a year ago, the DOJ released the findings of a 7 year study on hate crimes, per capta per 100,000.  The results are shocking.  We’re told that the South is full of racism and hate.

States with the least hate crimes reported, ranked from bottom:

States with the highest number of hate crimes, ranked from the top:

Here’s the thing, with the exception of Tennessee, do you see any Southern states in this list? 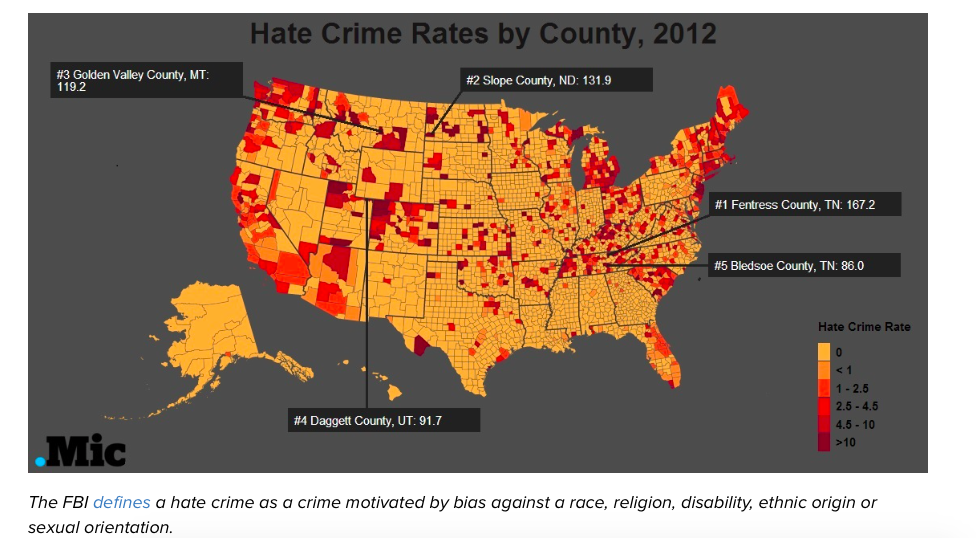 I am getting sick and tired of hearing good liberals tell me how nasty and racist the South is, without them having ever lived there.  I spent most of my life in the South.  Yes, it is racist.  The worst racists I’ve ever encountered are in Florida.  Unfortunately, more than a few of them are my so-called relatives. What is ironic there is that my generation is far more bigoted and racist than were my grandparents. Some of the scariest rednecks I’ve ever encountered are in north Florida.  They make Deliverance look like a little Sunday afternoon spin on the lake. I grew up in and came of age in the north-west corner of South Carolina, about 100 miles from Atlanta, and then in Atlanta.  Sorry, but in Oconee County, our schools were very quickly and logically integrated. We prided ourselves on NOT being racist.  There were parts of rural western North Carolina which were so bad, my father would not allow his black truck drivers to make deliveries in those locations.  It was too dangerous.  By the early 1980s, his black driver (only driver) was making long-haul deliveries from Oconee County to North Florida, North Carolina, Alabama, Louisiana, Mississippi, Virginia, and Georgia.  Pete was treated with respect and dignity – which he not only deserved, but was deserving of.  At that time, people were treated equally.

Then, by the mid-1990s, far right libertarians, separatists, and truly disgusting individuals began moving, especially into South Carolina.  They were, and I repeat, were transplants from the North and Midwest. The Christian Exodus movement, which is involved with the racist League of the South, was founded by Cory Burnell, who is NOT from the south, but California.  His racist movement is also directly tied with Tea Party Libertarians.  This is where it started.  I was there.  I watched it happen.  I fought against it.  I watched these people move in, and take over, spreading their own special little version of libertarian racism with them.

The thing is, even today, South Carolina isn’t even at the top of the chart when it comes to hate crimes, racism, and segregation.  But, that doesn’t matter, does it.  Perception is all that matters.  Because of its past, because of what happened before and after the Civil War, the South must be constantly reviled by well meaning people who only know what they’ve read.  I don’t know about you, but I’m getting sick of it.  Let the statistics speak for themselves. 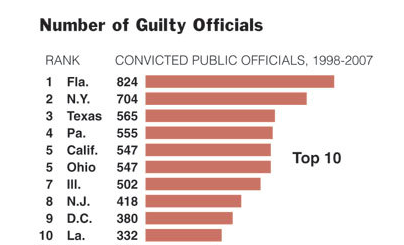 There is a much-heralded study stating that, because of the racist action on Twitter, that the south is more racist.  It is corrupt, but, interestingly, with the exception of Illinois and Pennsylvania, corruption and racism don’t go hand in hand.

The most segregated cities in America? Granted, today’s average American doesn’t know much about geography, but, aside from Miami, which is NOT considered Southern, please, point out one of these cities which are in the racist South?  Oh, the most racist city in the US – Boston.

“…The main thing about Cincinnati is not that it’s the city itself that’s racist, it’s everything around it. You have to go around the I-275 circle to find the real racism in that town. And it’s a more subtle racism. Those places are filled with people who are annoyed that the world is too “politically correct” for them to tell that awesome racist joke that they just heard. These “Cincinnatians” live 20 miles outside town cause the black people started moving out of the inner city and at the current rate they might be living in Columbus in 20 years (Oh wait, that’s a GAY-friendly town so FUCK THAT)

Personal Anecdote: I was driving with my girlfriend and we ended up driving by Music Hall, which is probably the most beautiful building in the city, which also meant that we drove into Over-the-Rhine which is a pretty harsh inner city area. Now it’s only about 4 or 5 in the afternoon during the summer, so it’s very light outside. As I’m driving through the neighborhood, my girlfriend (she lived far outside the city) is SQUIRMING in her seat. She starts pleading with me to get her out of there. She basically starts yelling at me to get her out of there. It’s early afternoon, the only people there are just some homeless people milling around but nothing crazy.. There was literally nothing happening around us. This girl’s view was so warped that she thought the instant we stepped downtown we had at least a 50/50 shot we’d get shot cause of black people. I no longer date this woman…” 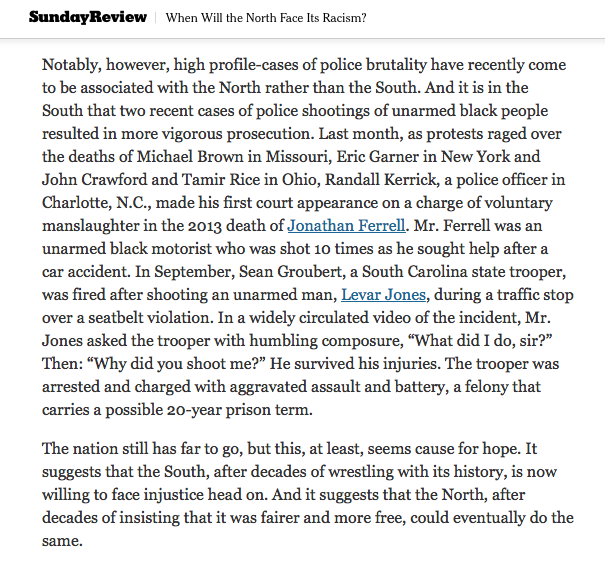 Then there is violent crime.  Once again, the rankings of violence do not coincide with rankings with racism or hate crimes – with one exception- Tennessee. 2013

“…New Mexico’s violent crime rate rose 6.6% between 2012 and 2013 — the most in the nation — to nearly 597 per 100,000 residents. The increase in violent crime came despite Governor Susana Martinez’s avowal in 2011 to be tough on crime. As in other dangerous states, the concentration of crime in New Mexico’s larger cities may have contributed to the state’s crime problem. Albuquerque, for example, the state’s largest city, had an estimated crime rate of 775 violent crimes per 100,000 residents, more than twice the national rate. New Mexico residents were also among the nation’s poorest in 2013, with a median household income of $43,872 and a poverty rate of nearly 22%….”

New Mexico is considered one of the least bigoted states in the country, with one of the fewest instances of hate crimes reported.  Once again, it proves that violence does not necessarily correspond with racism.  You might want to note that  the list of states with the highest rates of racism and hate crimes does not include the following:

If the South is so evil, and so racist, why aren’t these states leading the way with hate?  What is even more interesting is that these are the states fighting hate crime legislation.  Yet, the states where there is an established pattern of racism and hate have legislation in progress or already established. They are also the most segregated

Perhaps it isn’t good to assume.  Sure, right now, like every other part of the nation where Red States rule, the South is making a fool of itself.  But, ironically, that doesn’t seem to correspond to actual racism, segregation, and hate crimes.

Why do people denigrate the South so much?

As far as all those nasty Tweets about Barack Obama out of the South.  Wait until next year.  If the Democratic nominee is a woman, it will be nasty.  If the nominee is a white male, it will be the same.  It’s payback for how the Democrats treated George W. Bush.  The problem is, when the GOP gets someone in office, the Dems will attack with just as much viciousness. Trust me, I’ve been attacked by liberals and conservatives.  They’re both attack, bully, and hate – equally.  Only the cause is different.

There’s one other little thing.  A tremendous amount of the bias against the South is the growing liberal animosity to Christianity.  As a Christian, I’m beginning to find it to be disgusting. It is an acceptable bigotry. It is also one of the reasons the South is so hated – the Bible Belt.

Can’t we all just get along?