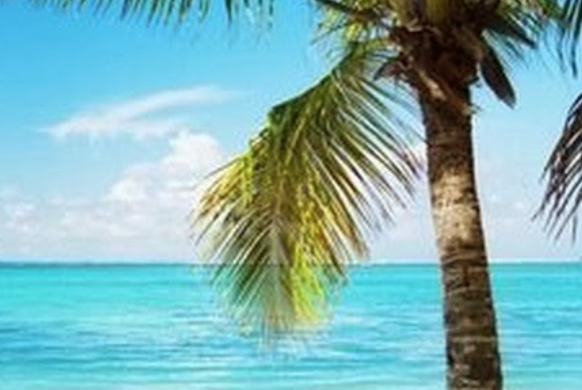 “...The Bisbee Deportation was the illegal deportation of about 1,300 striking mine workers, their supporters, and citizen bystanders by 2,000 vigilantes on July 12, 1917. The workers and others were kidnapped in the U.S. town of Bisbee, Arizona and held at a local baseball park. They were then loaded onto cattle cars and transported 200 miles (320 km) for 16 hours through the desert without food or water. The deportees were unloaded at Hermanas, New Mexico, without money or transportation, and warned not to return to Bisbee….”

In Bisbee, Arizona, in 1917 men who were union organizers were literally rounded up at gun point and put in boxcars, and shipped into New Mexico.  Having been told they were not allowed to return to their homes, they were met by recruiters for the military.  That was their only out, their future was bleak. 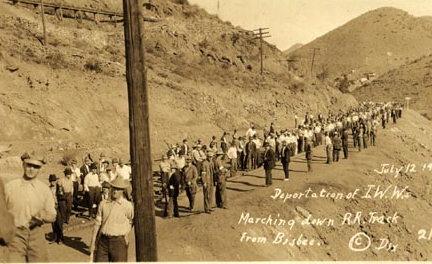 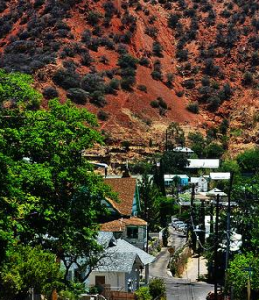 he saw was the business end of a double-barrel shotgun.

That never portends a good day. Sure enough, it got worse.

Hours later, Watson stood with dozens of other men in a dung-filled boxcar with no food or water as it lurched through the desert from Bisbee to Columbus, N.M.

When the men arrived – all told, the train carried 1,186 of them – the good people of Columb

us turned them away. So the engineer doubled back to Hermanas, N.M., where he decoupled the locomotive and rode off, leaving the men high and very, very dry.

It was called the Bisbee Deportation. In addition to being a startling story in its own right, the event speaks to any number of recurring American themes – wartime paranoia, fear and demonization of outsiders, the power of corporations – that still dominate headlines nearly a century later.

The deportation was Big Copper’s answer to the labor unrest that crackled across Arizona mining country that fateful summer, rippling through Jerome, Globe-Miami, Clifton-Morenci and, most dramatically, Bisbee.

The stakes were huge. 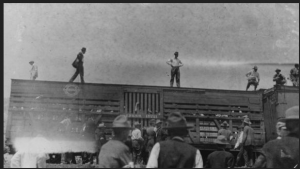 Already The Arizona Republican, in a special section breathlessly touting the glories of Arizona commerce, had announced the state’s copper mines were good for $18 million a month in revenue. With Americans being mustered by the millions for the Great War in Europe, that figure only stood to grow as copper flowed to munitions factories.

It was high noon for the mining towns, whose populations soared to levels that seem unimaginable today. Jerome at one time counted 15,000 people, Miami 10,000 and “prosperous Bisbee,” in the words of a Republican headline, 22,000.

But the miners themselves did not share in the general sense of prosperity. As company profits soared, the workers’ wages stagnated, inflation accelerated and working conditions remained dismal. The miners – many of them Mexicans and other immigrants – were ripe for union organizers of various stripes. 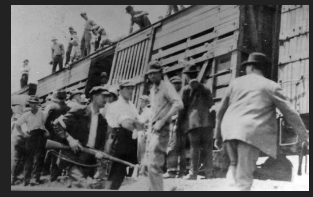 To militate for better wages and safer jobs in an industry vital to the war effort, however, was considered tantamount to treason in a nation being whipped into a patriotic frenzy by the newspapers. A front-page Republican editorial on June 30, 1917, suggested “sinister German influences” were behind the disloyalty among Arizona’s miners.

Suspicion lay most heavily on the Industrial Workers of the World, the so-called “Wobblies,” an antiwar union that had formed in Chicago in 1905. By 1917, the Wobblies were active across the state, but they by no means were labor’s only voice.

Schisms among Arizona’s unions, in fact, facilitated something of a dress rehearsal for the Bisbee Deportation.

It happened on July 10, 1917, the same day fire destroyed the old Hayden flour mill in downtown Tempe. It is a measure of the intensity of the times that the historic blaze merited only a one-column headline on Page 7 of the next day’s Republican.

In Jerome that morning, about 200 armed men affiliated with the Jerome Miners Union swept the town for suspected IWW agitators. About 75 were shoved into two cattle cars said to have been provided by the United Verde Copper Co.

The first stop was Needles, Calif., where shotgun-toting residents ordered the train back to Arizona. It wound up in Kingman, where the men dispersed.

Jerome’s mayor, J.J. Cain, is reported to have said, as the train pulled away, “The reign of the Industrial Workers of the World on Jerome is at an end.”

Miners had gone on strike in late June, hindering operations at Phelps Dodge, the Calumet & Arizona Mining Co. and Shattuck Arizona Copper, which together employed about 5,000 people.

The men sought a minimum wage of $6 per shift for underground work, $5.50 for those working above ground. They wanted limits on when dangerous underground blasting operations could be conducted. They also demanded that the companies stop requiring physical exams of the miners, which they believed facilitated discriminatory employment practices.

By June 30, Gov. Thomas Campbell, in office only temporarily as Arizona’s 1916 gubernatorial election worked its way through a recount, asked for federal help to quell the unrest in Bisbee.

The IWW, in turn, sent a telegram to Campbell demanding the release of union members who had been jailed. The Republican characterized the telegram as an illegal threat to harm the governor if he did not comply with union demands.

On the night of July 11, Cochise County Sheriff Harry Wheeler deputized 2,000 men belonging to the Bisbee Workman’s Loyalty League and to the business-oriented Citizens Protective League. Many were issued guns from the armory of Phelps Dodge, whose powerful and feared president, Walter Douglas, is widely believed to have orchestrated what came next. 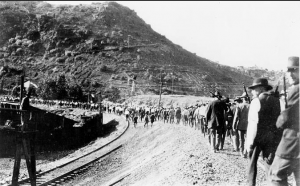 Early on July 12, the huge posse – after making sure that telegraph and phone lines were shut down – began sweeping the town for suspected IWW members, sympathizers and other so-called undesirables.

Of the deportees, at least 229 were Mexicans and 167 were Americans. Immigrants from at least 33 other nations also were rounded up.

Given the potential for violence, it is perhaps remarkable that only two men died. James Brew, an IWW member, killed posse member Orson McRae, who had come to arrest him at his boardinghouse. Brew, in turn, was mowed down by vigilante gunfire.

Although those were the only two official casualties, there were later reports, according to University of Arizona research, of beatings, robberies, vandalism and abuse of women by the vigilantes….”

“…The vigilantes rounded up over 1,000 men, many of whom were not strikers — or even miners — and marched them two miles to the Warren Ballpark. There they were surrounded by armed Loyalty Leaguers and urged to quit the strike. Anyone willing to put on a white armband was released. At 11:00 a. m. a train arrived, and 1,186 men were loaded aboard boxcars inches deep in manure. Also boarding were 186 armed guards; a machine gun was mounted on the top of the train. The train traveled from Bisbee to Columbus, New Mexico, where it was turned back because there were no accommodations for so many men. On its return trip the train stopped at Hermanas, New Mexico, where the men were abandoned. A later train brought water and food rations, but the men were left without shelter until July 14th when U. S. troops arrived. The troops escorted the men to facilities in Columbus. Many were detained for several months.

Meanwhile, Bisbee authorities mounted guards on all roads into town to insure that no deportees returned and to prevent new “troublemakers” from entering. A kangaroo court was also established to try other people deemed disloyal to mining interests. These people also faced deportation….”

Cochise County has had many strange, dangerous, and weird moments.  This was probably the blackest day in the country’s history.  The OK Corral and subsequent Vendetta Posse was nothing compared to the pure, dripping, malicious evil of the Phelps Dodge Company.

Unfortunately, today, we are entering into a world where anyone who wants to stand up for the rights of the worker is portrayed as evil. One wonders when, in Koch America, we are going to start seeing the same sort of thing.  I fear it is coming.