PART I: The Modest Christian Woman 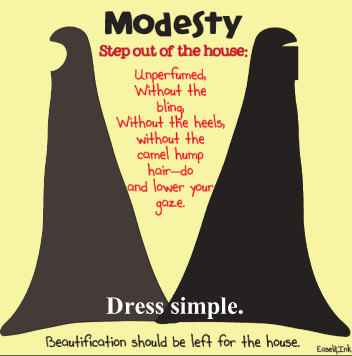 This is the first of four posts examining the role of modesty and control within today’s far right so-called ‘christian’ world. It is a truly disturbed situation, where truly disturbed individuals are using their perverse versions of ‘sin’ and modesty as a way to literally control the world around them, and those who follow their dubious theology.

This is the dumbest thing I’ve ever read in my life.  There is no such thing as spiritual virginity.

“…Spiritual virgin is the one who manifest a quality of spiritual devotion to god.God can choose us if we dont gossip he brings us back home and restores us to his service .You loose your virginity once and you cant get it again but to become a spiritual virgin,what an opportunity it is quite possible to start all over again.Spiritual virgin doesn’t destroy your past but it tranforms it. The god who made the universe out of nothing can take your past and make from it something beautful imagine virgin Mary till now people always know her because she lived a blameless life…” 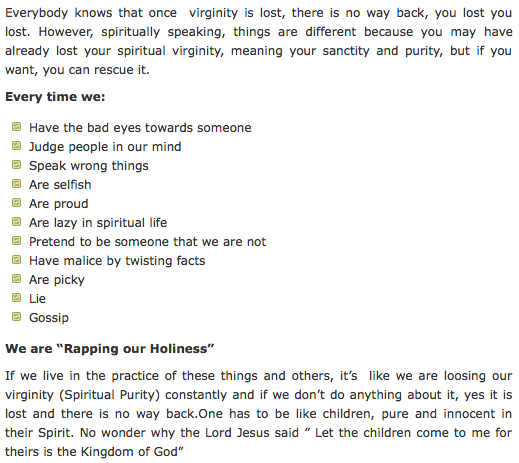 Ah, yes, … ‘spiritual virginity’.  It is not Biblical.  Fact is, it comes out of the UCKG (Universal Church of the Kingdom of God), which is a fraud and a scam, yet, so called ‘christians’ are so ill informed, they fall for this sh*t.

And – we are NOT responsible for another person’s spiritual virginity and spiritual  purity.

“...We are responsible for the spiritual purity of others (Philippians 2:4; Hebrews 3:12,13). Paul’s strong emotions come in the form of a godly jealousy and fear. As a spiritual leader, Paul was responsible for the flock and was committed to keeping it from drifting into sin. Likewise, each of us must preserve our own spiritual fidelity so we can protect others from being deceived and led astray into an insincere and impure devotion to Christ….”

According to ‘godly’ men, who get all hot and bothered over the female form, the modest ‘christian’ women should dress in ways so as not to cause them to think of a woman with lust.  They don’t want young men to have lustful or sexual thoughts because, according to their very strange version of life, having impure thoughts is as good as adultery.  There are so many things at play here, including basic evolutionary biology.  In a study about how men look at women, one thing they discovered basically reinforced what anyone with a rational mind knows.  When normal men ogle women who are younger, prime breeding age, they are (on a basic biological level) trying to see if she is capable of having their offspring.

“…Guo and his colleagues had previously discovered when young men look at images of women close to them in age, their eyes are drawn to the chest and waist-hip region. (This may not shock any woman who’s been ogled in a bar lately.) These two regions are likely important signals for men, with breasts hinting at the sexual maturity of the woman and waist/hip ratio suggesting her ability to carry a child, Guo said. Men don’t show the same ogling patterns when looking at older women or children, suggesting this sizing-up may be a signal of sexual interest….”

“…“If you had to know one thing about a person to best predict how often they would be thinking about sex, you’d be better off knowing their emotional orientation toward sexuality, as opposed to knowing whether they were male or female,” said Terri Fisher, professor of psychology at Ohio State University’s Mansfield campus and lead author of the study. …”

When you compare this to what is being taught and preached via the far right, conservative Christian Reconstruction, ATI, and former Vision Forum world, or Mark Driscoll’s X-rated sermons, you would think that so-called ‘godly’ ‘christian’ men do nothing but think about sex.  Well, maybe some of them do, which in itself is not normal sexual behavior but an indicator of their own sexual and psychological immaturity. They have reached the point where they are so obsessed with sex, that they have turned normal urges into abject sin.  In doing so, they are destroying the peace of mine of men and women who have been drawn into their perverse little world.

“….I  tried to stop. Sometimes I’d go weeks without watching that pornographic station. Even so, there were still other things that stimulated me sexually—and I didn’t have to make any special effort to find them. It could be a model in a commercial or magazine ad. Or maybe I would stare longer than I should at a girl at school in a midriff-baring top, a short dress or low-cut shirt. I’d find myself daydreaming about what I’d seen. …. I knew I’d let myself fall into lust….”

Evidently, it is a woman’s fault.  The article, where the young man struggles to find sexual purity is followed by a commentary by a ‘godly’ ‘christian’ young woman.  The worst part of this article is the fact that the young man in question was doing nothing wrong, other than having normal sexual urges men have had since the beginning of time.  Today, though, just having those urges, according to the brainwashing power of Bill Gothard and his ATI training, is abjectly evil.   In order to understand the problem, consider that fact that Bill Gothard has a mailing list of 90,000 ministers from around the world, who have been spoon fed the following lies for decades.

“...Are you shocked by Mark’s struggle? Don’t be. Mark isn’t alone in dealing with lust. He’s not weird, sick or a pervert. Mark’s just more candid about this issue than many of our Christian brothers are comfortable being with us girls.

For guys, much of the battle is on the visual front. Guys tend to become sexually stimulated by what they see. Like Mark, many of them fight desperately to keep pure thoughts while they are surrounded by sexual images.

When he spoke to Campus Life, Mark shared that he’d like girls to read Every Young Man’s Battle: Strategies for Victory in the Real World of Sexual Temptation by Stephen Arterburn and Fred Stoeker (Waterbrook Press, 2002). Even though this book is written for young men, Mark says, “It will really help girls to respect how difficult it is for guys to be God-honoring in this area of our lives.”

Don’t get me wrong: We’re each responsible to God for ourselves. It’s a guy’s responsibility to gain control over his thoughts and actions. That’s between him and God. But the way we girls dress can help our Christian brothers maintain pure thoughts—or it can make their struggle with lust more difficult.

I’d encourage you to take responsibility for what you wear. With the help of your mom, a friend, your brothers or even your dad, look through your closet and ask yourself if each item there helps or hurts your male friends in their quest for purity. It’s something to think about when you’re trying on clothes at the mall, too.

By paying attention to how we dress, we’re doing more than helping our Christian brothers. We’re preparing ourselves to attract guys who will want to be with us for the right reasons….”

In many ways, by denying that humans are sexual creatures, and that certain urges are perfectly normal, the religious right has created several generations of sex-obsessed, emotionally stunted, highly immature men.

“…Whatever else we do, we must give the highest priority to shaping a healthier sexuality in our young people, especially boys. We also need to provide opportunities to bring healing to our men. judging them because they seem out of control won’t help. It only breeds more shame, remorse, and crippling silence. The battle can only be won by helping them to develop a healthier sexuality. How does one create a healthy sexuality, given the problems mentioned? And what can men do to heal an already distorted sexuality?

The challenges are enormous and I don’t want to give the impression that there are quick and easy solutions. However, here are some practical ways we can begin to rebuild the beautiful gift that God has given us through our sexuality:

1 . We need to acknowledge our need for divine intervention. While there is a lot of therapeutic help we can offer, only the power of God can get a man out of the mess of a distorted sexuality with any degree of permanency.

2. We must help the church at large to break the veil of silence that shrouds sexuality. Men’s support groups have already begun to spring up around the country. The time has come for frank, open discussions in our churches about the dangers of such practices as sexual fantasies, the damage of the early expo sure of boys to pornography, and the importance of building healthy, balanced lives. Believe it or not, when one’s life is rich with meaning, sexual temptations lose their power even in men with serious distortion….”

In other words, in order to maintain absolute purity, having any form of sexuality, unless one is married, is a sin.  In other words, like my mother said, when I read this you know what to her, is that in order to be a true ‘pure’ ‘christian’ this day and age, a person must have a lobotomy.  God gave us biological urges.  He gave us attraction for others.  He created us in His own image.  God created human sexuality.  Now – we are to ignore it?  We are to use the Bible for a sex manual for how to live a pure life?  What Bible are these idiots reading?  The entire thread of life is about men and women triumphing over their personal sins, repentance, and finding salvation.  Look at David.  No one lived a more impure life, but David was beloved of God.