PART I: Is the United States Slouching Toward Sodom? 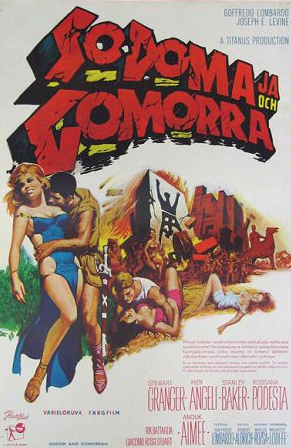 One of the more disgusting aspects of far right (so called) Christianity is the abject hatred of anything remotely resembling gay or lesbian.  In their pathetic, hate filled, ignorant little world, they equate ‘sodomy’ with the destruction of Sodom and Gomorrah.  The destruction of the two cities is because of sexual sin.  Never mind that, thus far, archaeology cannot even locate the cities.  It is possible they never existed. How do you base hatred on a location that may not have existed?  This alone is rather fascinating because the Old Testament is a half-way decent guide to archaeology of the Holy Lands.  But, any attempt to locate the Twin Sin Cities comes up blank.  Of course, like Creationism and Fred Flintstone science, this doesn’t stop the far right. Why let historical and archaeological, along with theological accuracy get in the way of a good hate?

Let’s start with the word sodomia.  The sexual meaning of the word sodomia did not evolve for Christians until after the 6th century AD. The Emperor Justinian I is the first, in his novels dating from 538AD and 559AD to homosexuality.  The sexual practice had been denounced from quite early on, including Paul, but the word ‘sodomy’ was NEVER a part of the lexicon.  The word was all but forgotten until 850AD when a Frankish monk, using pseudonym Benedictus Levita (“Benedict the Levite”) linked the word to the deed.  In 1307, in order to destroy the Knights Templars, the charges of sodomy were leveled against them.  During the 18th Century in Europe, sodomy laws were used to execute men, accused of the practice.  In 1730, in the Netherlands, 60 men were sentenced to death.  The last execution for sodomy in England was in 1835.

According to Catholic scholar, Mark Jordan, in his book,The Invention of Sodomy in Christian Theology, says that the term basically originated during the 11th Century.  St. Ambrose and Origen clearly defined the term as inhospitably.   According to Jordan, the Bible never links the ‘Sodom’ with homosexuality. 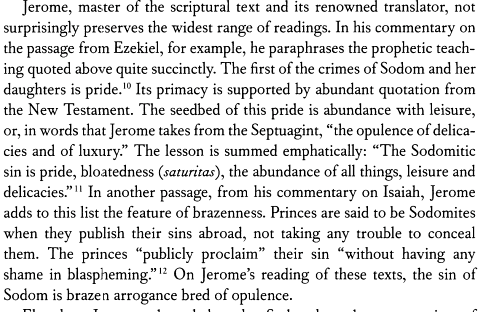 The Invention of Sodomy in Christian Theology, p. 33

In many ways, there is absolutely nothing to indicate homosexuality as the reason for the downfall of the two cities.

Jeremiah 23:14 But in the prophets of Jerusalem I have seen a more shocking thing: they commit adultery and walk in lies; they strengthen the hands of evildoers, so that no one turns from wickedness; all of them have become like Sodom to me, and its inhabitants like Gomorrah.

Ezekiel 16: 46-50 Your elder sister is Samaria, who lived with her daughters to the north of you; and your younger sister, who lived to the south of you, is Sodom with her daughters. 47You not only followed their ways, and acted according to their abominations; within a very little time you were more corrupt than they in all your ways. 48As I live, says the Lord God, your sister Sodom and her daughters have not done as you and your daughters have done. 49This was the guilt of your sister Sodom: she and her daughters had pride, excess of food, and prosperous ease, but did not aid the poor and needy. 50They were haughty, and did abominable things before me; therefore I removed them when I saw it.

According to Jewish legends, in Midrash Pirkei Eliezer the real reason Sodom was destroyed was not because of homosexuality, but because of the cruelty of its people.

“...any resident of these cities who attempted to give food or aid to a poor person was subject to death. As a matter of fact, this same midrash tells us that Lot’s daughter was convicted of giving bread to a poor person each time she went to the well for water and, as the people began her execution, she cried out to God. It was this cry that reached God and prompted God to send the messengers (angels) to Sodom and Gomorrah to see if their sin was as great as her cry would imply…”

While modern orthodox tradition says that the sin was homosexual, traditional Jewish teachings are about the lack of kindness to strangers, and cruelty.

“…Rictor Norton views classical Jewish texts as stressing the cruelty and lack of hospitality of the inhabitants of Sodom to the “stranger”. The people of Sodom were seen as guilty of many other significant sins. Rabbinic writings affirm that the Sodomites also committed economic crimes, blasphemy and bloodshed. One of the worst was to give money or even gold ingots to beggars, after inscribing their names on them, and then subsequently refusing to sell them food. The unfortunate stranger would end up starving and after his death, the people who gave him the money would reclaim it.

A rabbinic tradition, described in the Mishnah, postulates that the sin of Sodom was related to property: Sodomites believed that “what is mine is mine, and what is yours is mine” (Abot), which is interpreted as a lack of compassion. Another rabbinic tradition is that these two wealthy cities treated visitors in a sadistic fashion. One major crime done to strangers was almost identical to that of Procrustes in Greek mythology. This would be the story of the “bed” that guests to Sodom were forced to sleep in: if they were too short they were stretched to fit it, and if they were too tall, they were cut up (indeed, in Hebrew and Yiddish, the corresponding term for a Procrustean bed is a “Sodom bed”).

“…The Tosefta employed verses from the book of Job to teach that the people of Sodom acted arrogantly before God because of the good that God had lavished on them. As Job 28:5–8 says, “As for the land, out of it comes bread . . . . Its stones are the place of sapphires, and it has dust of gold. That path, no bird of prey knows . . . . The proud beasts have not trodden it.” The people of Sodom reasoned that since bread, silver, gold, precious stones, and pearls came forth from their land, they did not need immigrants to come to Sodom. They reasoned that immigrants came only to take things away from Sodom and thus resolved to forget the traditional ways of hospitality. God told the people of Sodom that because of the goodness that God had lavished upon them, they had deliberately forgotten how things were customarily done in the world, and thus God would make them be forgotten from the world. As Job 28:4 says, “They open shafts in a valley from where men live. They are forgotten by travelers. They hang afar from men, they swing to and fro.” As Job 12:5–6 says, “In the thought of one who is at ease, there is contempt for misfortune; it is ready for those whose feet slip. The tents of robbers are at peace, and those who provoke God are secure, who bring their god in their Hand.” And so as Ezekiel 16:48–50 says, “As I live, says the Lord God, Sodom your sister has not done, she nor her daughters, as you and your daughters have done. Behold, this was the iniquity of your sister Sodom: pride, plenty of bread, and careless ease was in her and in her daughters; neither did she strengthen the hand of the poor and needy. And they were haughty, and committed abomination before Me; therefore I removed them when I saw it.”…”

According to Jewish Oral Law, the death penalty, which is stated in the Old Testament, well, there must be two witnesses to come forward having seen the actual homosexual sex act in progress.  Not once, in all of Jewish history is there a record of such an execution.

Why is this so ironic when dealing with modern day America?