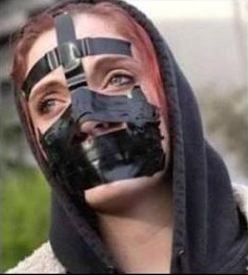 Bill Gothard teaches that women are the property of men. He discourages mid-wives from registering the birth of children, not filing out birth certificates – especially of baby girls. He is one of the original advocates of beating babies, who are terribly sinful.

“…The use of an umbrella to symbolize protection is commonly understood and accepted. In the insurance industry, an overall coverage of protection is referred to as an “umbrella policy.” In the Bible, similar symbols teach the concepts of provision, protection, headship, and leadership. The use of this symbol in relation to the family is to give special encouragement to fathers to protect, instruct, lead, and provide for their wives, sons, and daughters. It is also to remind the family that no father is perfect, but as they pray for him and encourage him, they can increase his ability and motivation to fulfill his God-given responsibilities…”

“…The same relationship that God established for believers in Christ is to be carried out between the husband and wife. The headship of the husband is compared to the headship of Christ, and just as Christ sacrificed Himself for the Church, so the husband is to lay down his life for his wife (see Ephesians 5:23–25). The family of the Church and the family of the father are also related in respect to leadership and protection. “For if a man know not how to rule his own house, how shall he take care of the church of God?” (1 Timothy 3:5)….”

According to Suzanne Calulu, who grew up under the influence of Gothard’s strange teachings, his Institute for Basic Life Principles turn a person’s mind to mush. That would explain the why the far right is increasingly brain dead.

“…Wives and children must be under the “chain of command.” [Fear] This concept is illustrated by an umbrella. The father is the umbrella, and his wife and children are under it. The wife and children are to be in blind submission, and are taught to give up their rights. The father controls them by making their decisions for them and creating constrictive rules for their behavior. His umbrella is two fold in that it represents his authority and his protection of those under him…..

~Having friends other than your siblings/spouse is evil, especially non-Christian friends.[Lonely, Isolated] The logic here was that each human was evil, and couldn’t control that very much, even if you try your entire life through fasting, prayer, self flagellation and isolation. …So it’s best to limit your friends to Christians only, and only Christians who have no apparent vices….

~Humans are born sinful when they come out of the womb as a baby, needing to be corrected and saved. [Fear] God is a god of anger, judgment and condemnation. ….”…

~As a wife or child, you don’t have a right to question the Patriarch in authority over you. [Fear] A Patriarch answers to God alone, not his wife or child. A Patriarch has a God given right to get angry, threaten and punish you if you challenge or question him. The patriarch is only getting angry just as God gets angry when questioned. A patriarch channels the very voice and will of God, which is absolute and never wrong. A father and husband in the cult can do no wrong….”

It is quite easy to see how Gothard has influenced the religious right. You can see it in their hatred of women, the demands that women be submissive to the men in their lives. Suzanne Calulu goes on to explain that, as a female, you are born to be submissive, under male authority from birth to death. As a child you have no rights. If you marry, your husband becomes your lord and master, the same way your father was. Even if you marry late in life, ownership of you, as a woman, is basically transferred from father to husband.

“…”. Both sons and daughters are under the command of their fathers as long as they are under his roof or otherwise the recipients of his provision and protection. Fathers release sons from their jurisdiction to undertake a vocation, prepare a home, and take a wife. Until she is given in marriage, a daughter continues under her father’s authority and protection. Even after leaving their father’s house, children should honor their parents by seeking their counsel and blessing throughout their lives.”…”

Women, who are emotional creatures are not allowed to make any decisions except those in the home. They are less stable than men. Women and children do not have a right to make decisions. If you are a woman and ask questions, it is sinful. The father, the husband is above the law, even when he is abusive. Women are not to go to college, or to be educated beyond the home.

“…Mr. Gothard is so caught up in his “umbrella of protection” concept that he can’t see reality. He has no idea how REAL families operate. Not Beaver Cleaver families. Not Stepford families. But REAL families. He claims that “Satan cannot get through to some sons and daughters unless there is a leak in the father’s umbrella”. He teaches a philosophy that as long as sons and daughters abide by the demands of the father, their lives will be successful. In his seminars, Bill teaches that if a father/husband’s authority is not properly recognized, then all else will fall apart. If the wife fails to submit to her husband, her children will be rebellious. The success and failure of the family hinges on how everyone in the line of command responds to the father. It really gripes me that Bill refuses to see the countless families under his influence who were falling apart due to power hungry, authoritarian parents and not because of rebellious children. Will he ever wake up and see that the huge generation of parents who were drawn to ATIA were attracted to it because it fed their hunger for self-centered control in the name of religiosity? And so now with his “courtship” development, he’s giving parents continued propaganda about the biblical standard for leading their children to marriage. Every control-obsessed parent’s dream!!!…”

A child’s spirit must be broken. 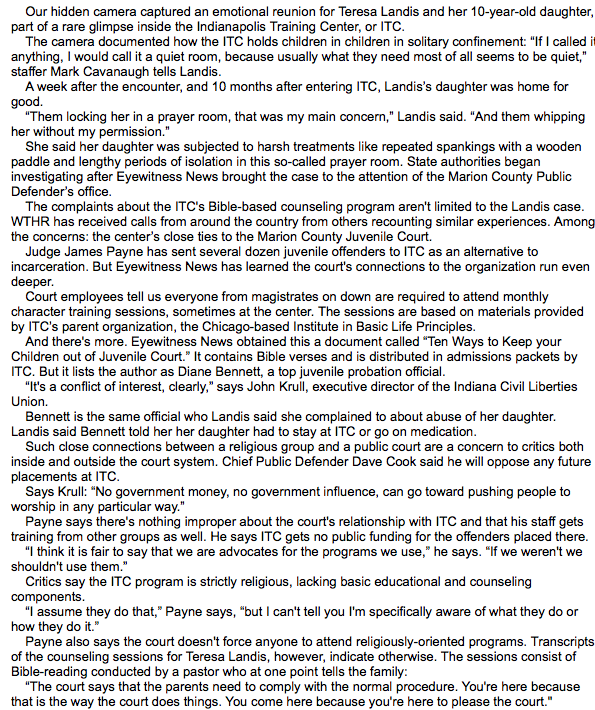 Gothard also thinks that being even the least bit over-weight is a sin.

“...Food was hidden, forbidden, or locked up in ammunition boxes with a padlock on it. The orange juice box had a line drawn by a sharpie marker showing the last level of the juice. If when he came home, the drink level was lower than the marking, someone would be punished. My father was afraid we would overindulge, which would be a sin. Food was sinful and had to be hidden. We were all normal size or small as kids, so his fear was a reflection of his own fear.

There was a ticker counter device installed on the front door limiting the number of times we could go in and out of the house. Because too much freedom even in going in and out of your own home would lead to a person getting… dare I say it… getting out of control. Our parents disabled our kitchen phone so that it would make incoming calls, but you couldn’t call out. This was to stop my teenage brothers and sisters and I to not get tempted to talk to other people unmonitored. Hair gel, underwear that looked too “pretty,” books smuggled in that weren’t copies of the Bible, they were confiscated as tokens of evil.Under cult rules, we were not allowed freedom in basic life routines like eating, going in and out of our house, and communicating with the outside world. God wanted us to monitor ourselves vigilantly, because the devil prowls around like a roaring lion, hidden in everyday guises. You must never let your guard down….”

According to one survivor:

Bill Gothard has inspired many religious leaders today. His abject dislike of women has also changed the culture in this country, and not for the better. He has inspired heresy after heresy. The Southern Baptist Convention will never be the same. Neither will the country, if David Green of Hobby Lobby wins his argument before the Supreme Court.

Interestingly, Gothard and R. J. Rushdoony were good buds. It all makes sense. Rushdoony was a racist, who also felt that women were less than human. As I have repeatedly stated, Rushdoony, and his protege, Gary North taught:

“…According to Gary North, women who have abortions should be publicly executed, “along with those who advised them to abort their children.” Rushdoony concludes: “God’s government prevails, and His alternatives are clear-cut: either men and nations obey His laws, or God invokes the death penalty against them.” Reconstructionists insist that “the death penalty is the maximum, not necessarily the mandatory penalty.” However, such judgments may depend less on Biblical Principles than on which faction gains power in the theocratic republic. The potential for bloodthirsty episodes on the order of the Salem witchcraft trials or the Spanish Inquisition is inadvertently revealed by Reconstructionist theologian Rev. Ray Sutton, who claims that the Reconstructed Biblical theocracies would be “happy” places, to which people would flock because “capital punishment is one of the best evangelistic tools of a society.”…”

Gothard popularized the hate. The only reason Gothard did not verbatim use Rushdoony’s work is because Rushdoony was divorced, and Gothard opposed it, at all costs. According to a May 20, 1974 issue of Time Magazine, Gothard tells women who have husbands who ‘chastise’ them to say “God, thank you for the beating.”

Even more alarming is the fact that, at one time Gothard was involved in what could only be considered a Christian militia movement. 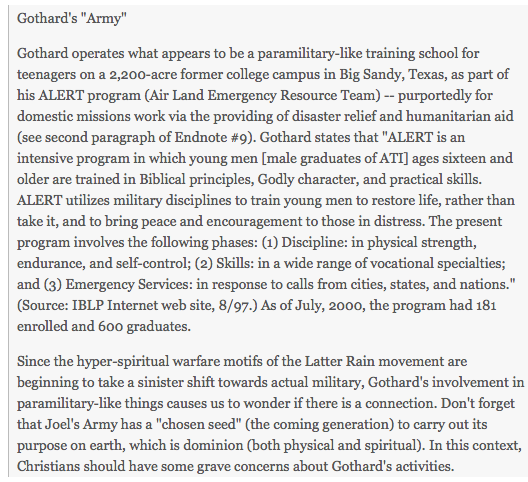 “...An increasingly worrying development in neopente dominionist communities has been embracement of a highly militarised version of neopente dominionist theology-descended in part from the “Manifest Sons of God” movement in the 1930s and 1940s (and occasionally classified as a revival of MSoG theology)-known alternately as “Joel’s Army” or “Joshua Generation” theology; increasingly the concept of “spiritual warfare” is being seen as acceptable to train for physically. And, as it turns out, Gothard’s ALERT Team is among the most explicitly militarised of “Joel’s Army” groups of this sort-disturbingly, with apparently official support from US military leaders:…”

Bill Gothard is (was) all about authority. He once sold books that women were neither allowed to purchase or read. Teens who disobeyed were going to live a life of agony.  His cult is more powerful than Scientology ever wanted to be.  He has made upwards of about $30 million.