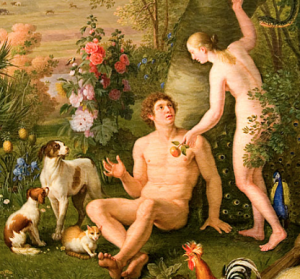 “…It is not evil that attracts women, it is the fruit of powerful, unrestrained evil: Dominance, Confidence, Assertiveness, Mastery. These are all intoxicating to the female mind; they ensnare the senses and reason. Do women fall for weak, sniveling cretins? Of course not. They are drawn to strength, to Power. “Weak evil” is no more attractive than “weak good.” The reason why so many women are drawn to evil is because it is so much more common to find “strong evil” than “strong good” in the present age. Women cannot help but be drawn to strength, no more than the moth can resist the flame. Is this a flaw in our species? Of that, there can be no doubt. But on the other hand, it is a flaw that can be controlled for, assuming society has the Will to do so. Sadly, ours doesn’t. In the immortal words of Spaceballs:…”

“Since women are emotional creatures…”? You really don’t know any women, do you. Women are far from emotional. You think a woman is going to be led by a sad little man who is so afraid of the opposite sex that he’s going to go out and find some 15 year old girl and basically browbeat her into being his helpmeet? This is the year 2014. In order to find someone like that you’d need to travel back in time – I suggest sling-shot around the sun with the proper warp fields protected with heavy shielding – but, you’re only going to find women like that during the Renaissance and the Hellenic Period, when women were just what you want them to be, today – absolutely nothing. They were expected to sit down, shut up, and do as they were told.

“…Women like men who are decisive because it takes the pressure of responsibility off of them and they can just enjoy the ride that you’re taking them on without having to worry….”

“...When women get emotional it is key to set boundaries for how she acts and for the subsequent discussion and enforce them. This is how you need to be decisive when conflict breaks out. There are two key components here.

Know how you want to handle the situation. This is mostly gained from experience in a man, so that is why it is imperative to seek knowledge of how to handle situations and talk to a lot of people. Stick to your guns or principles. If you cave you are going to be touted as indecisive and she will lose respect for you. No matter how much a woman cries, whines, name calls, or the like you need to stick to your decisions. This does not preclude a apology if you did indeed wrong her or someone else, but the boundaries must be maintained even if you were in the wrong….”

Then, I started digging a little deeper. Boy did I come up with something interesting. Well, these poor little men are into the art of manliness. It’s like they want to be so gosh-darn John Wayne manly, that they are acting like a bunch of simpering sissies. They celebrate Biblical Manhood. They don’t like feminists. They don’t like women. What is fascinating is that their writing is nonsensical. It is irrational, makes no sense, and is basically impossible to follow. I’m sorry, but t his is the dumbest crap I’ve ever read. Now the fun part is that these guys are connected to VDare, American Renaissance, Glenn Beck, Fox News, and anything men’s rights. You see, they need rights, too. We evil feminists have stolen them. Never mind that they jerks they’re hanging out with – to get these rights, to piss, fart, and bond are all connected with white supremacists, the KKK, and Stormfront.

Stormfront is good place to start with these jerks. This is about total and complete control of a woman. Not only are there overtones of S&M (only religious of course), but his is absolute control of a woman, her life, and is a stepping stone toward abuse. He doesn’t approve of women going to grad school, because by the time they’ve graduated they’re too old to marry. They’re worthless to this sort of man.

“...As for Attractiveness, any changes that need to be done here, and that can be done here, will probably involve weight loss. That means physical fitness and careful dieting. As a potential suitor, the role I would play would be a mix of gym instructor and nutritionist. I would oversee the woman’s exercise regime, setting what days would involve which workout, as well as ensure accountability and track progress. For dieting it would be somewhat similar. I would expect to set a menu for the week, including meal times. Most likely it would involve some sort of low or no carb Paleo diet. In many respects this is perhaps the easiest of the processes, but also the most time intensive and longest-term. Being a source of encouragement and support would likely be vital here, given how easy it is to slip and revert to your old ways….”

It’s all about a discussion of Christian manliness. They emote, they sigh, and are worse than women. Let’s face it, these are girly men. Any so-called male who must examine his ‘masculinity’ and constantly discuss it is a joke. There are discussions about Christian masculinity and confidence, attracting women, and how to get a wife. FYI: A man shouldn’t cater to a woman’s needs. He needs to show strength and let her know that’s he’s the boss because that women are attracted to confidence. Sure, but there’s confidence and pathetic little jerks who don’t know what it like to be a real man. You see, real men don’t need to discuss what it is to be a man.

“…Age: This is an especially important attribute for several reasons. For one, a younger woman is more likely to be able to have children, can have more children, and the children are likelier to be healthy. Age also significantly impacts female attractiveness and how long a woman has left at her present level. In addition, the older a woman is, the more likely she is to be set in her ways, and the more negative behaviors she is likely to have picked up. Unlike some men, I don’t draw a line in the sand when evaluating a woman by her age, except when it comes to being older than me. For many 25 seems to be that bright line, after which they won’t consider a woman for marriage. Myself, I use a sliding scale. The younger a woman is, the higher her overall value. Just because a woman is in her mid to late twenties doesn’t mean I will rule her out. Instead, I evaluate women more critically in all other areas the older they are. In terms of how this might play out, what it means is that I might rate a “6″ who is 18 and is deficient in feminine virtues to be roughly equal to an “8″ who is 28 and has more of those virtues. It is about tradeoffs- the younger the woman the more children she can have and the longer I will be married to her at her present attractiveness. Overall, a younger woman will have a larger margin to work with in other fields. All of which goes to show why women should try to marry when they are younger….”

This saintly, submissive, nun, whore, bombshell with the chastity of Mother Theresa and the body of Anna Nicole Smith, must be submissive. She must know her place – which is in the kitchen and in bed. She must also have an excellent earning potential, even if she is working at home.

What truly bothers me about all of this is that it is a total recipe for abuse. Men who make up this stuff (note that I did not use another word) have no grasp of reality when it comes to women and dealing with them. Any man who plans on shaping his date’s body, telling her what to eat, etc. is a controlling jerk. Controlling jerks become abusers.

Jonathan Lindvall is one of those controlling jerks. His daughter isn’t allowed to have a driver’s license, but his son is.

“...But even if you don’t register to vote, at least some states are now drawing jurors from their list of driver’s licenses. Ultimately, there may be no way to completely shield our families from government intrusion. However, this is one more reason I have chosen not to have my daughter get a driver’s license. I believe Numbers 30 indicates that daughters are to be more protected than sons. When Bethany approached the age when many young people acquire permits to learn to drive, I began hinting that she would soon be driving. She wasn’t particularly excited, but was prepared to follow my leadership. My wife appealed to me, however. She questioned whether it is truly healthy for young ladies to drive. She noted that when she “got wheels” she began displaying much more of an independent spirit from her parents. She questioned whether this was healthy. While I was initially skeptical, I began pondering and praying about this issue. I recalled an aunt who never has driven in her life. Although she is quite capable, no doubt, she and my uncle apparently believe it is his place to drive and hers to ride. This is the traditional pattern from before cars were even invented. Even today, in most families the husband does the majority of the driving when the family travels together. At about this time, the Lord was clarifying my own thinking regarding young people’s independence and our assumptions regarding individualism. Ultimately I evaluated this decision in light of a more scriptural paradigm, and concluded that we would at least delay Bethany’s getting a driver’s license. We anticipate leaving this decision to her husband, whoever (and whenever) the Lord has her for….”

This is control and it is abuse. It is a world where a woman, a wife, a daughter are told to remain with their abusive spouse or father. It is a world of harsh discipline, where a rebellious child is to be denied food, to be punished by whipping, and eventually disowned. The uneducated person has a very difficult time making their way in the real world. They are so unprepared for life that they can’t even hold down a job flipping burgers. This is the world these pathetic little men have created for themselves. In this world, there are those who advocate stoning the rebellious child to death.

It is called…. ABUSE

RSS feed for this post (comments)
Previous Post« Part I: Pathetic Little Men Who Either Hate or Fear Women
Next PostPart I: Is the Handmaid’s Tale Coming True? »
The Pink Flamingo
Bombax Theme designed by itx
﻿﻿﻿﻿﻿
WordPress SEO fine-tune by Meta SEO Pack from Poradnik Webmastera