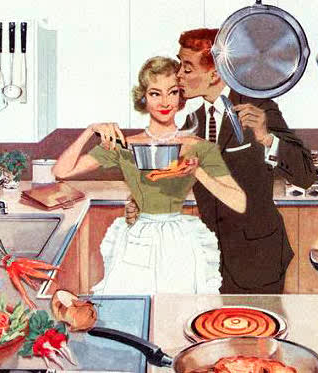 What is rather fascinating is that up until the past fifty years or so, women were not ordained. The traditional role of women was as a wife and a mother. When women stepped out of the home, for careers, at first, only those of nursing and education were open to her. After World War I, women, especially young women, spread their wings, bobbed their hair, and shortened their skirts. They became secretaries and doctors. They became respectable actresses. They became movie stars, flew planes, drove cars, taught in colleges, and received the right to vote. Even then, the religious powers that be did not see the need to rewrite Christianity in order to force the little woman back into the home. This did not begin until the late 1970s, in Taylors, South Carolina.

Today, the far right patriarchal movement is about a group of men who want to control all aspects of their families, from voting, driving, birth, courtship, and spouses.  It is an abusive situation based on heresy. 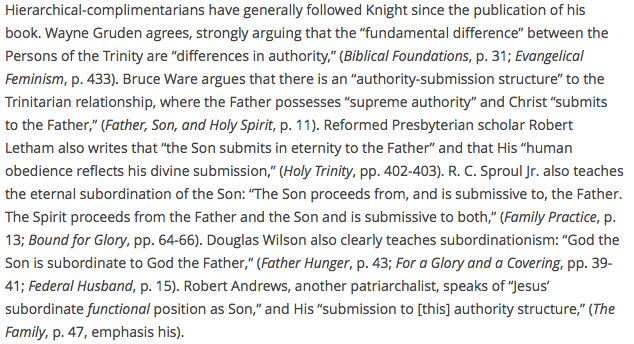 Journey of a Lifelong Disciple

Then, and only then, did the perversion of the Christian faith begin. From Ron Williams, who has, fortunately, been completely debunked and disgraced.

“…Who is to perceive this duty that Solomon outlines? The Hebrew language indicates in this passage through a second person masculine singular suffix that Solomon is probably addressing a man. The context of course, would indicate that the father of the household is the subject of Solomon’s admonition. Solomon, in doing this, is underscoring and agreeing with the rest of Scripture when it teaches that child-training and education is the primary responsibility of the father of that child. The primary responsibility for this vital task is not delegated by God to the mother, Sunday School teacher, pastor, day school teacher, grandparents, or any other person, but is the primary responsibility of the father. Obviously, these other individuals are an invaluable help to the father, especially his wife, but they are helpers only. A father will stand before the judgment seat of Christ and give an account for the spiritual, emotional, and physical welfare and training of his wife and children. It therefore behooves a father to be extremely judicious and cautious in whom he selects to be his helpers in the vital task of training and educating his child. Why?…”

They are fighters in a culture war for the very soul of the nation. It is their responsibility to re-make America into the vision of R. J. Rushdoony, where men are men, children are whipped into perfect behavior, and women are eternally submissive with their spouses having assumed god-like responsibility for their very souls. Indeed, in the perfect patriarchal world, do women even have souls? Those woman who does not submit may even, according to some in the biz, will have their very wombs cursed. R. C. Sproul, Jr., even advocated whipping his late wife into submission.

It is a world where women can be and have been horribly abused – all in the name of God.

“...We’ve already looked at the ways in which patriarchy teaches that the Son is in eternal subordination to the Father in the inter-Trinitarian life, a subjugation which gives the Father complete authority over the Son, which is an unintentional revival of neo-Arian heresy. This subordination is then carried out downward into family, social, and cultural life (Wilson, Father Hunger) and creates a circular structure of systemic abuse and manipulation of men, women, and children. How is it abusive?It begins by claiming the full might of Biblical authority for itself. Disagree with the “clear” exposition of Scripture and you’re nothing but a rebellious spirit. Those who disagree are enemies, “screeching” feminists and an egalitarianism that flattens out the Trinity and is “poison” and “heresy” (Wilson, Father Hunger, 5-6, 43). There is no real discussion here, simply a conflict by some other folks who refuse to submit to God’s Word. This is known as authoritarianism, which paints the world as existing between light and darkness, and defines the “light” as that which happens to be conveniently right where they’re standing. Thus, when the teaching, whatever it happens to be, comes down from on high, those listening are predisposed to adopt that teaching of belief as “revealed truth” on par with the Scriptures themselves….”

Man is now responsible for everything. He must confess his sins because the household is not working properly. If a wife is sinning by being slovenly, watching to much television, or even thinking independently, it is his fault. Men are now responsible, not only for their wife’s salvation but their children’s. Women must submit to everything, no matter what. If not, she should be whipped. In a patriarchal household, the father is the high priest of the house. R. C. Sproul, Jr. wrote that

“… “God ordained the family as the basic social unit, a microcosm of society. A father, as head of this unit, carries responsibility for going before God to intercede for his family,” because “a priest is one who mediates” in order to “effect cleansing and renewal” and who “intercedes redemptively between the holy God and the sinful people who need restoration,”… This involves fathers who “bring our families daily before the throne of God, before His mercy seat,” and by “interceding for our families, even as our Lord intercedes for us,” communicating to the household “As your priest I will bring you before the presence of our Lord,” (pp. 58, 59). But this isn’t just for the kids: “there is nothing your wife wants more than that you should do the same for her,” (p. 58). Wilson teaches the same thing, that the “Lord is not only our priest and king, He is also the prophet who instructs His people. In Paul’s teaching, he requires the husband to teach his wife in just the same way,” …”

It then becomes an idolatrous situation that is not Biblical in any way. According to Adam Taylor Ross, it sets the family up as an idol. it also almost undoes Baptism, because the father is now the mediator between Christ, his wife and his family. By turning the household into an idolatrous situation, one of the Ten Commandments is being broken, daily.

It has gone so far that in many churches, women have become little more than slaves.

“…• Women are disenfranchised: In many FIC’s, women are not allowed to be voting members in their own right, even if they are single mom heads of households, and they are not allowed to be part of congregational meetings or public discussions in matters that affect all church members. The assumption is that they can privately express their concerns to their own husbands but not their objections to church polity or policy. Though many women in FIC’s actually consider themselves to be complementarian, they see the ever increasing slip into patricentricity in their churches and they are horrified. More recently holding Old Testament patriarchy up as a standards scares them; they wonder if the obsession for Abraham, Isaac, and Jacob will bring about polygamy. The disregard for the government and the fear that is instilled in them, similar to what happened prior to Y2K, makes them realize that external accountability is not a possibility for them.; church and husband authority are all that matter. They also are concerned about the pressures they see their husbands experiencing…..supporting really large families on one income, the stress that husbands to have their own businesses and not “increase the gain of others,” the teachings that they are prophet, priest, and king in their homes, thus responsible for all the spiritual lives of their wife and children, the man role playing they are supposed to embrace, the adversarial relationships. More than one wife has told me how happily married they were until patriarchy destroyed their homes. Some survive; others do not. Since many teachings include the idea that everything is somehow the fault of a woman and her lack of submission, she is again shamed and defeated. She is then told that her health problems are the result of unconfessed sin and forced to “repent” of whatever the leadership says her sin might be….”

It is a system that now encourages pedophilia.

“...Another young man in his mid 20′s having a relationship with a 14 yr.old girl in the church..Yep..I’d smack my son with a two by four if this was happening with him..He married the girl 3 yrs. later when she was 17 with the parents full permission.He was 27 by then.She was the daughter of the woman I mentioned above..I was constantly told that they considered him an uncle..yep.

Second daughter of above woman going after another young man in the church and the entire family left the church when the young man asked the new pastor if he would marry them.She was 15 and he was 23 at the time.Mentioned just a few dramas here simply to say that..

These were the pastors sons..Sometimes I look back at it all and think..How did this all happen?..I don’t dwell on it..but I do know that this craziness exists even amongst homeschoolers and church..Get out..you can survive and flourish with the Lord’s help only.Fight Hypocrasy with Truth!!…”

This is one of the sickest things I’ve read in a long time. It’s called pedophilia.

“… Another aspect of the current mob mentality concerning young women marrying fifty (50) year old men is that the public just cannot believe that a thirteen year old woman would be interested in a fifty year old man. Have they never heard of Mick Jagger, he’s sixty five years old and man is he UUUGLY! Yet he still has teens swooning over him. The fact is, in the enclosed society of the FLDS, the fifty (50) year old men are the MOST attractive men to their young women. They strut their little industrial complex with a charisma that politicians would envy. Their families are large and happy. They’re famous teachers in their community. They are fearless in the face of mainstream society, willing to risk prison for their beliefs. These men are not just desirable to the young women in their society, they’re what our mainstream whores would call HOT. (A whore is a woman who has lost her virginity willingly without wedlock.) But here is the issue that EVERY person who claims they are a Christian MUST deal with. The Bible defines marriage. If these women were given to their husbands by their fathers as wives then they indeed are wives and anyone who encourages them to be with another man is guilty of causing them to become adulteresses for they can only be released to marry another man by their husband with his giving them a Bill of Divorcement. ….”

Unfortunately, there are more than a few pathetic, little men who believe this.  We’re talking about men who are so out of control, so impotent, and so lacking in any context to their lives that the only way they can justify their existence is to abuse and dominate the women and children in their lives.  In order to legitimize their activities, they must literally pervert the scriptures.  They must become the high priest of their home, interceding for the very soul of their wives and children.

It is NOT Christian.

We are watching the birth of a new religion, a new cult.  Unfortunately, today’s Christian is so ill-prepared in the way of the world that they literally don’t know what they believe. They literally fall for this stuff.  Years ago, when I was a kid, we were taught, by hysterical religious leaders that we needed to learn as many Bible verses as possible learn as much theology as possible, because the Godless Communists would come along and take our Bibles and throw us into prison for what we believed.  The one good thing that came of their hysteria was learning the Bible.  It’s too bad people today don’t have that advantage. How do you fight heresy when you don’t know that it is heresy?