Part II: The Leader of the Home 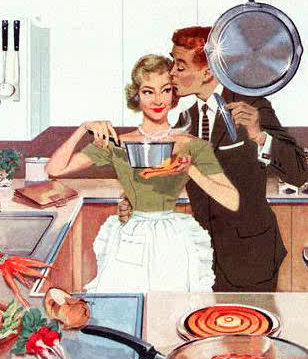 Helen Andelin basically created the godly submissive woman movement with her Mormon tome, Fascinating Womanhood. She wrote it as an antidote to feminism. Women are ultimately fulfilled by making themselves empty-headed little girls who use coercion, lisps, and frilly clothes to attract the men of their lives. They don’t fill their pretty little heads with things like politics and science since men find that unattractive. They don’t correct the men in their lives, even if the men in their lives beat them to a pulp. Unfortunately, her book inspired Debi Pearl and Nancy Campbell, who are basically theological idiots.

“...Andelin proudly guarantees that every woman will see positive results if she only follows the fascinating womanhood principles, reminding readers that the burden of a happy marriage and home life is on the wife. In what I call a treatise on feeding a man’s fleshly desires, Andelin’s book is 380 pages of feminine manipulation and role playing at its finest and she even admits that women must become accomplished actresses in order to please their husbands. Andelin admonishes women to never be more intelligent than their husbands, to dummy themselves down if they must and to never offer an opinion on manly subjects like politics, current events, math or science.

She reminds women that fathers own their children and that mothers, in spite of what the law says, do not. Therefore she might have to acquiesce to a husband’s methods of teaching and disciplining, while using feminine wiles rather than logic to persuade him to her way of thinking.

She says that young women ought to prepare for marriage and housekeeping rather than college and that they are to see themselves as under the authority of even their brothers. She believes that women are somehow more flawed by the fall than men, leaving a woman with impaired judgment, she says women are more emotional than rational, should never speak out in front of men, that employment outside the home is an abomination, and that a man’s ego is sacrosanct and must be maintained at all costs.

And the silliest notion of all, women are exhorted to become childlike to please their husbands because we all know husbands find little girl behavior much more attractive than being married to an actual adult woman.

Andelin suggests that women visit the little girl’s section of a department store to find clothing styles to copy, like ruffles, lace, and ribbons.

She says that even unattractive women, like those whose faces are marred by freckles, can be attractive to their husbands if they are careful not to blur the lines between maleness and femininity by never dressing in man’s clothes, that is, jeans, or doing man’s work around the house, like mowing the grass or using a screw driver.

Even more important is to never ever allow your husband to do any of your chores, like laundry or dishes or running a vacuum cleaner, especially since your sons might see this and become homosexuals.

And if you aren’t already amazed enough, here is perhaps my favorite quote in the book from her chapter on how women are to practice and perfect using childlike anger which she says husbands love. “Learn childlike mannerisms by studying the antics of little girls. Stomp your foot, lift your chin high, square your shoulder, pout, put both hands on your hips, open your eyes wide, mumble under your breath, or turn and walk away briskly, then pause and look back over your shoulder. Or beat your fists on your husband’s chest…describe him as a big brute, or a hairy beast. Say to him, “How can a great big man like you pick on a poor little helpless girl like me?”…”

This is where the real problem is. Helen Andelin was writing for her Mormon associates. Mormons, contrary to the tall tales that are told, are not Christians. They have an entirely different theology from mainstream Christianity – or the did until recently. Now though, it appears that even the Council on Biblical Manhood and Womanhood, along with leading SBC theologians are embracing LDS theology, in order to keep women submissive.

The Boerne Christian Assembly where now disgraced Doug Phillips attends church, denies communion to women. You will note that I did not refer to their practice as the Holy Eucharist. Husbands, fathers are high priests who intercede for their wives and families. Without that high priest, that husband, a woman cannot approach God. The BCA is a Baptist off-shoot. It is left up to the men of the church to decide who takes communion in their families. When the church where Doug Phillips attends bars women from approaching the holy altar for communion, they are literally not allowing women to approach Christ without an escort who has different genitalia than they do. 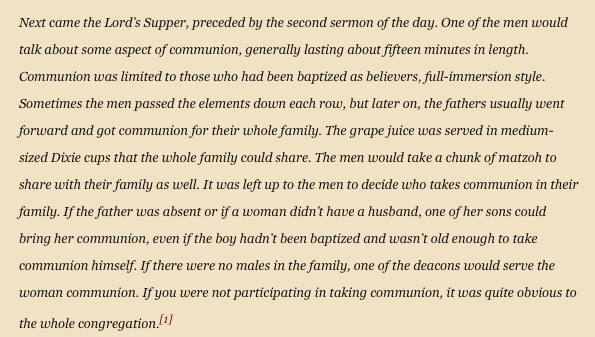 Not being a homemaker is a sin!

“....If there is still any question about the role of women in God’s eyes, Jennie Chancey explains why not being a homemaker is a sin in an article she wrote for Vision Forum in response to Pastor Andrew Sandlin who has critiqued these teachings on several occasions. She said: ““What truly amazes me is that Rev. Sandlin can state so confidently that the Bible does not call a woman leaving her God-given, home-based occupation for work outside the home “sin”..…. blasphemy is sin, whether it is spoken verbally or lived before a watching world.” Please do not miss what is being taught…The role for women is being a housewife and not being one is blasphemous and therefore a sin.” There is no exception. All women have to be homemakers like Jennie and Stacy to be godly women….”

The Patriarchy movement, according to one blogger turns the traditional nuclear family into the only force from which America’s society can be saved. The only way to save it is by having lots and lots of little white children.

“…“Has your husband reviled you and threatened you? You are exhorted to respond as Jesus did. When he was reviled and threatened, he suffered by committing himself to a higher judge who is righteous. You must commit yourself to the one who placed you under your husband’s command. Your husband will answer to God, and you must answer to God for how you respond to your husband, even when he causes you to suffer.Just as we are to obey government in every ordinance, and servants are to obey their masters, even the ones who are abusive and surly, ‘likewise, ye wives, be in subjection to your own husbands’…You can freely call your husband ‘lord’ when you know that you are addressing the one who put him in charge and asked you to suffer at your husband’s hands just as our Lord suffered at the hands of unjust authorities…When you endure evil and railing without returning it, you receive a blessing, not just as a martyr, but as one who worships God.” …” Michael Pearl

Libby Anne wrote something absolutely shocking that explains how the Christian world has degraded itself. It makes sense, when once realizes that John Piper says that the Christian Church is essentially masculine. Complementarianism is nothing more than male dominance. Men are given headship over women. The man who has had absolutely no theological training has been given dominance over women with degrees in theology simply of the anatomical features of their bodies, nothing more and nothing less.

“…The very wise and good plan of God, of male headship, is sought to be overturned as women … want instead to have their way, instead of submitting to their husbands … and their husbands … now respond to that threat to their authority either by being abusive, which is, of course, one of the ways men can respond when their authority is challenged, or more commonly by becoming passive, acquiescing and simply not asserting the leadership they ought to as men in their homes and churches.”…”

In order to put their he-man-woman-hater’s club in order, men who have adapted the theology must turn their back on two thousand years of Christian theology, and on the teachings of Christ. In fact, one of the things you will discover is that ‘complementarians’ don’t pay much attention to Christ. A woman, like Dr. Sheri Klouda, must be kicked out of the Southern Baptist Theological Seminary because it is a sin for women to teach men.