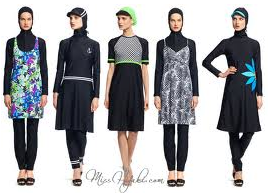 One of the very real problems with today’s modesty culture, is that it is creating truly disturbed versions of what is normal sexuality. In an article about modesty, a young woman writes, almost hysterically, of a young man, wearing shorts only, who dared to engage her in conversation, on an Easter morning, of all times.  She was truly upset because he only had on his shorts, and had to divert her eyes, so that she might now have lewd thoughts about him.

An excellent comment on her article basically put everything into context:

“…Get a grip. It seems every time a religion tries to desexualze something they just make it worse. Me (a female) and my male roommates somehow manage to coexist quite peacefully and respectfully, and comfortabley in not much more than our underwear around the house. Modesty is never an issue. Why is it that when I see my half naked roommates sex is never the first thing that pops into my mind? But it seems to be so for so many Christians? Also i think it’s interesting that in areas where women wear the most, Muslim countries, rape rates are higher, and vice versa. Compare the social dynamics in areas with extreme modesty, Muslims, to those of tropical tribes where few clothes are worn. In those areas there is no such thing as modesty. People are treated with more respect and sexually associated violence is rare. So how bout you get a grip and start taking some personal responsibility and treat everyone like human beings who deserve to be as comfortable as they want on a hot summer day….”

When those of the opposite sex have turned something normal, into pure sin, we have a very real problem.  Sexual sin is no worse than any other sin.  Once again, we are presented with the problem that perhaps the real culprit here is the fact that Calvinistic and ATI based religious leaders don’t quite understand the true nature of sin.

“…While Christians may think that people generally take a dim view of sexual sin, this is no longer true. The Church has entered an age when Christians are saying, “Pornography is only for self-gratification, a kept woman for feeding my neglected emotional and physical needs. A wife is to manage the home and give an image of a Christian family.”

The biblical standards of human sexuality may not be easily accepted by new converts or maintained by Christian couples that have grown up in the church. The problem is not simply a weakened attitude toward sexual sin or the minimizing of sexual sin, but a failure to know the real enemy.

The consequences of sexual sin among Christians are worse than the consequences of war, disease, economic failure, or terrorism. What happens to people in this life is far less dreadful than what can happen to them in the life to come. Jesus said, “Do not fear those who kill the body, and after that have nothing more that they can do. But I will warn you whom to fear: fear him who, after he has killed, has authority to cast into hell. Yes, I tell you, fear him!”…”Harry W. Schaumburg, M.A., M.S., D.Min., LMFT,

Schaumburg is a card-carrying Calvinist.  Once again, we are presented with the very worst stereotypes of traditional Calvinists.

Well, guess what? Therapists now consider it abnormal for people not to have sexual thought and fantasies. It is unhealthy not to have them. They are NORMAL. A person can control what they think. But – this is about absolute control. Not only must the pseudo-Calvinist cult control a person’s spiritual life, their home, how they live, relate to others, they now must control what they think. In fact, not having fantasies is considered a sexual dysfunction in itself.

Sorry – but this is a cult. It has nothing to do with Christ, and everything to do with religious idols maintaining control so they can bilk the flock out of their last red cent.

In order to control – one must also control what a woman wears. For some strange reason, men of this ilk fear the beauty and sexuality of women. That, in itself should be a commentary on their psychology.

“...I firmly believe that if men go back to being men; leading their homes, providing for their families, lovingly guiding their children; and women go back to being women; managing the home, caring for their husband’s needs, and teaching their children; we would see a sharp decrease in the gender confusion that plagues our adolescents today. My husband and I want to make a strong distinction of the genders for our child(ren). I have worn skirts for about 4 years at the time this article is being written, and I have grown my hair (which the Bible says is a glory to women 1 Corinthians 11:15), and I have started wearing a head covering…”

Oh, there’s another reason why women should dress modestly. Men are superior to woman, at least they are, according to Peter Chin.

“…We should also realize that men almost always find themselves in a position of strength. Of course individual men can be weaker or stronger, but on the whole, as a gender, and historically, men hold more positions of authority, have more wealth, are physically stronger, and have not been subjected to sexual exploitation to nearly the same degree. Even the weakest man is in something of a privileged position, and this position means that there is an extra burden upon men to live up to their calling to holiness and honoring women appropriately….”

According to one normal Christian male, the Purity Culture is not about Christ, but the rules of men. In fact, the standards of modesty which are now being forced upon the Christian world, and they are trying to force it on everyone else are NOT Christian but Mormon. Except for the most self-righteous churches, until about 20 years ago, the entire topic of modesty and purity was a joke.

The most fun about all of this is the fact that the fake purity culture of today is nothing but a reflection of the fact that both Jesus and Nazareth and Paul were acting within ROMAN law – not Judean or Hebrew law, but the accepted law of the land. The laws were codified by Augustus Caesar as a public relation’s ploy to mask his despotic take-over and his destruction of the Roman Republic, destroying hundreds of years of representative rule. So, to make everyone think he was going by the old ways, he decided to restore ‘traditional values’ to the SPQR – the Senate and the People of Rome. This alone is explosive, when Christ said render unto Caesar, that is just what he was saying.

Oh, and there is even more. From the book, Raising Maidens of Virtue, Stacy McDonald write:

A. The duties required in the seventh commandment are, chastity in body, mind, affections, words, and behavior; and the preservation of it in ourselves and others; watchfulness over the eyes and all the senses; temperance, keeping of chaste company, modesty in apparel; marriage by those that have not the gift of continency, conjugal love, and cohabitation; diligent labor in our callings; shunning all occasions of uncleanness, and resisting temptations thereunto.

Q. 139. What are the sins forbidden in the seventh commandment?

A. The sins forbidden in the seventh commandment, besides the neglect of the duties required, are, adultery, fornication, rape, incest, sodomy, and all unnatural lusts; all unclean imaginations, thoughts, purposes, and affections; all corrupt or filthy communications, or listening thereunto; wanton looks, impudent or light behavior, immodest apparel; prohibiting of lawful, and dispensing with unlawful marriages; allowing, tolerating, keeping of stews, and resorting to them; entangling vows of single life, undue delay of marriage; having more wives or husbands than one at the same time; unjust divorce, or desertion; idleness, gluttony, drunkenness, unchaste company; lascivious songs, books, pictures, dancings, stage plays; and all other provocations to, or acts of uncleanness, either in ourselves or others….”

“…The Hebrew word here is ne’ifa, and it doesn’t occur all that often. The standard interpretation means “intercourse between a married woman and a man not her husband.” The Talmud observes that just like commandment #6, #7 can warrant the death penalty in theory.

The word is not zonah, which means “stray.” That word can either mean prostitution, or a married woman straying from her husband. (When Leviticus prohibits a Kohen from marrying a Zonah, the Talmud says that means a married woman has who cheated with anyone — even though she’s now widowed.) “Don’t do zanah” would be directed at a woman only. “Don’t do ne’ifa” applies to men and women.

Commentaries such as Sforno (cited above) suggest that the Ten Commandments also signify categories that encompass the entirety of the commandments; thus, the specific commandment was “don’t do ne’ifa”, but the philosophical category from that illustration is intended to cover all prohibited sexual relations.

While there’s this illustrative-category thing, the direct meaning of the seventh commandment is most definitely not prohibiting sex out of marriage. That prohibition would be either Deuteronomy 23:18, according to some; or of post-Biblical nature according to others….”

What ignorant wretches like Stacy McDonald don’t quite grasp is the fact that the code of morality expressed in the New Testament by Christ and later by Peter and Paul is NOT Jewish, but Roman. During the reign of Augustus Caesar, he attempted to redefine traditional Roman family values. It’s too bad our so-called Christian Conservatives are unlearned in history that they don’t understand Christ was preaching, as much to the Romans as He was the Jews. The Judeans at the time were looking for a revolutionary Messiah, to over-throw Roman rule. Instead, Jesus of Nazareth went above and beyond, to state that he was not opposed to the Romans. In fact, Paul wrote his requirements for women and marriage based on ROMAN laws.

Oh, the photos of allegedly Muslim women are actually modeling the proper swim attire for more conservative Christian cults.  It’s all about the burka, baby.