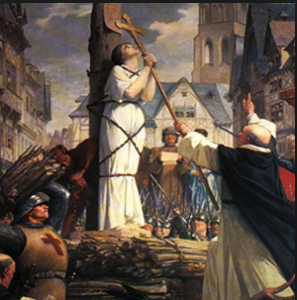 As with many of his followers, Rushdoony did not have a degree in theology. He graduated from UC Berkley with a B. A. in English. He then had a M.A. in education. graduated from the Pacific School of Religion, which was Congregational and Methodist. Ordained by the PC USA, he was a missionary to the Shoshone and Paiute Indians for 8 years, then took a church in Santa Cruz. He wrote his first book, while a missionary, a defense of home schooling, then founded the Chalcedon Foundation. He became affiliated with the John Birch Society, becoming a close friend of founder Robert Welch. Robert Welch was a close personal friend of Fred Koch. This is where the dots need to begin to be connected.

According to Christian Reconstructionism, basically created by Rousas John Rushdoony, a movement that was declared dead in 2008, but isn’t, there are many crimes which must be punished by death. Pope Francis recently wrote:

“...Saint Thomas Aquinas taught that the Church’s moral teaching has its own “hierarchy”, in the virtues and in the acts which proceed from them.39 What counts above all else is “faith working through love” (Gal 5:6). Works of love directed to one’s neighbour are the most perfect external manifestation of the interior grace of the Spirit: “The foundation of the New Law is in the grace of the Holy Spirit, who is manifested in the faith which works through love”.40 Thomas thus explains that, as far as external works are concerned, mercy is the greatest of all the virtues: “In itself mercy is the greatest of the virtues, since all the others revolve around it and, more than this, it makes up for their deficiencies. This is particular to the superior virtue, and as such it is proper to God to have mercy, through which his omnipotence is manifested to the greatest degree”….”

We’re not talking a humane death, but stoning, beheading, lynching, and burning at the stake. According to their libertarian economic policies, people should be executed in a way to save money.

“...Reconstructionists provide the most enthusiastic constituency for stoning since the Taliban seized Kabul. “Why stoning?” asks North. “There are many reasons. First, the implements of execution are available to everyone at virtually no cost.” Thrift and ubiquity aside, “executions are community projects-not with spectators who watch a professional executioner do `his’ duty, but rather with actual participants.” You might even say that like square dances or quilting bees, they represent the kind of hands-on neighborliness so often missed in this impersonal era. “That modern Christians never consider the possibility of the reintroduction of stoning for capital crimes,” North continues, “indicates how thoroughly humanistic concepts of punishment have influenced the thinking of Christians.” And he may be right about that last point, you know….”

They advocate execution for murder, active homosexuality, witchcraft, adulterers, blasphemers, and disobedient teens. abortion, incest, lying about one’s virginity, false prophesying, kidnapping, rape, and lying in a capital case. Slavery can be permitted. Our current form of Democracy is heresy. Heresy is punishable by death.

“...Epitomizing the Reconstructionist idea of Biblical “warfare” is the centrality of capital punishment under Biblical Law. Doctrinal leaders (notably Rushdoony, North, and Bahnsen) call for the death penalty for a wide range of crimes in addition to such contemporary capital crimes as rape, kidnapping, and murder. Death is also the punishment for apostasy (abandonment of the faith), heresy, blasphemy, witchcraft, astrology, adultery, “sodomy or homosexuality,” incest, striking a parent, incorrigible juvenile delinquency, and, in the case of women, “unchastity before marriage.”

According to Gary North, women who have abortions should be publicly executed, “along with those who advised them to abort their children.” Rushdoony concludes: “God’s government prevails, and His alternatives are clear-cut: either men and nations obey His laws, or God invokes the death penalty against them.” Reconstructionists insist that “the death penalty is the maximum, not necessarily the mandatory penalty.” However, such judgments may depend less on Biblical Principles than on which faction gains power in the theocratic republic. The potential for bloodthirsty episodes on the order of the Salem witchcraft trials or the Spanish Inquisition is inadvertently revealed by Reconstructionist theologian Rev. Ray Sutton, who claims that the Reconstructed Biblical theocracies would be “happy” places, to which people would flock because “capital punishment is one of the best evangelistic tools of a society.”

The Biblically approved methods of execution include burning (at the stake for example), stoning, hanging, and “the sword.” Gary North, the self-described economist of Reconstructionism, prefers stoning because, among other things, stones are cheap, plentiful, and convenient. Punishments for non-capital crimes generally involve whipping, restitution in the form of indentured servitude, or slavery. Prisons would likely be only temporary holding tanks, prior to imposition of the actual sentence….”

They don’t seem to know much about little, unimportant words:

“…All revealed truths derive from the same divine source and are to be believed with the same faith, yet some of them are more important for giving direct expression to the heart of the Gos- pel. In this basic core, what shines forth is the beauty of the saving love of God made mani- fest in Jesus Christ who died and rose from the dead….” Pope Francis

“...Soft Dominionists are Christian nationalists. They believe that Biblically-defined immorality and sin breed chaos and anarchy. They fear that America’s greatness as God’s chosen land has been undermined by liberal secular humanists, feminists, and homosexuals. Purists want litmus tests for issues of abortion, tolerance of gays and lesbians, and prayer in schools. Their vision has elements of theocracy, but they stop short of calling for supplanting the Constitution and Bill of Rights….

Hard Dominionists believe all of this, but they want the United States to be a Christian theocracy. For them the Constitution and Bill of Rights are merely addendums to Old Testament Biblical law. They claim that Christian men with specific theological beliefs are ordained by God to run society. Christians and others who do not accept their theological beliefs would be second-class citizens. This sector includes Christian Reconstructionists, but it has a growing number of adherents in the leadership of the Christian Right…”

The term “reconstructionism” has post Civil War overtones. There is a reason for this. Rushdoony was a bigoted racist.

“…“A little nutty” is a vast understatement. Rushdoony (who wrote much of his output during the ferment of the Civil Rights Movement) is considered the founder of the modern Reconstructionist movement. He is also loved by Douglas Wilson and Douglas Phillips. Unsurprisingly, at least by this time, he is another revered figure of the White Supremacy movement. As a matter of fact, my best source for information about the connections from Dabney to Rushdoony was a White Supremacist website. The white supremacists make no secret of all of this: they are proud of the racist views of Dabney, Rushdoony, and others. ..”

In fact, he wrote:

“...The white man has behind him centuries of Christian culture and the discipline and the selective breeding this faith requires… The Negro is a product of a radically different past, and his [genetic] heredity has been governed by radically different considerations. Unequal yoking plainly means mixed marriages between believers and unbelievers is clearly forbidden. But Deuteronomy 22:10 not only forbids unequal yoking by inference, and as a case law, but also unequal yoking generally. This means that an unequal marriage between believers or between unbelievers is wrong… The burden of the law is thus against inter-religious, inter-racial, and inter-cultural marriages, in that they normally go against the very community which marriage is designed to establish. Hybridization seeks to improve on God’s work by attempting to gain the best qualities of two diverse things; there is no question that some hybrids do show certain advantageous qualities, but there is also no question that it comes at a price, bringing some serious disadvantages. Every social order institutes its own program of separation or segregation… Segregation, separation, or quarantine, whichever name is used, is inescapable in any society….”

All of this is terrifying. R. J. Rushdoony created a cult, based on his version of the Old Testament.  There is nothing in it about Christ, only about hatred and a perversion of the Old Testament. Rushdoony created a completely new religion, a cult, which the far right, in their abject historical and Biblical ignorance have willingly accepted.  What he wrote, what is taught by his followers has nothing to do with Christian.  In fact, one of the great problems dealing with the likes of Doug Phillips and Vision Forum, with former homeschoolers, and those who were subjected to Christian Reconstructionism, is a tendency for those who grew up under the pressures of and hatreds imposed on them – to become atheist.

Mark 9:42 ‘If any of you put a stumbling-block before one of these little ones who believe in me, it would be better for you if a great millstone were hung around your neck and you were thrown into the sea.”

I don’t know about you, but I think there is a very special place in hell for people like R. J. Rushdoony.