Part III: The Leader of the Home 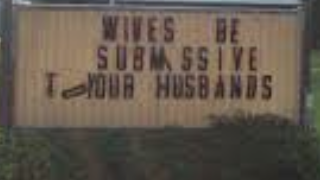 They must twist themselves into pretzels, revealing the fact that the average American Christian, even minister is abjectly ignorant when it comes to theological history. There is no other logical reason why women like Debi Pearl and Nancy Campbell, and abusive monsters like Michael Pearl are allowed to get away with spewing their abjectly wrong minded version of what Christianity is.

“… The above mentioned men, and others like them, such as Wayne Grudem, have dedicated their lives to teaching men that they are born to serve—but only in a leadership capacity.

Grudem, a Research Professor of Theology and Biblical Studies at Phoenix Seminary in Phoenix, Arizona and Board member of the Council for Biblical Manhood and Womanhood (CBMW), writes that being a helper does not always imply subordination (but with women he says it does). That he cannot stomach the idea that a man might be thought of as a helper in the same sense that he perceives a woman might is made clear from his statement that, “Eve was created as a helper for Adam, not Adam as a helper for Eve.” (Biblical Foundations for Manhood and Womanhood, Crossway Books, Wheaton, IL, 2002).

The Horner Homemaking House, located on the campus of Southwestern Baptist Theological Seminary (an institution devoted to caste in teaching women and men that they are born into certain inviolate “roles”), is another example of the complementarian double standard when it comes to servant-hood and what that means. The Homemaking House facilitates the school’s “homemaking concentration” at a Bachelor’s and even Master’s Degree level for women. Its stated purpose is to equip women for ministry in the home. Male students are not permitted to take this course.

What a travesty that the blessed words of scripture are twisted and so used to keep men and women bound by the cords of caste. There is a vast difference between the servitude of women imposed by The Council for Biblical Manhood and Womanhood and the servant-hood of Christ which all Christians should look to imitate as an example of pure love….”

This is not because I am a wiser or more gifted leader. It is because I am the husband. God has given me that responsibility. It is very good. It brings peace and joy to our marriage, and both Margaret and I are thankful for it. Now, I need to add very quickly, men, this does not mean that a husband has the right to be a selfish leader….”

They are also responsible for the home. The only thing a woman is good for is to follow their orders and be used as a sex object. In fact, there are some who say that a woman who is not a home-maker is committing a major sin.

“...Because you see, in that sentence above, the household is the man’s. Look at the Bible and you will see that the MAN is to be the Homemaker. They love 2 Timothy 3, but they are selling us a bill of goods when they tell us that women are to be homemakers according to scripture.

Nowhere does the Bible tell women to be Homemakers. Look at 2 Timothy 3:4 “He must be one who manages his own household well, keeping his children under control with all dignity. (For if a man does not know how to manage his own household, how will he take care of the church of God?)”

The husband makes the home, and the wife cooperates with him by being submissive and allowing him to make the decisions, spend the money, control the kids. That leaves cookin’ and cleanin’ for her to do.

The definition of a homemaker is one who manages a household. It would appear that the Council has it wrong. They really want her to be the Maid. Otherwise, when the husband comes home, he is in her domain, and she sets the rules – in other words – a homemaker would be superior to her husband in the home….”

Not only have women been reduced to second class spiritual citizens. but now, they are not allowed to take communion unless it is from the high priest of their home, or one of his associates.

“...I then explored the consequences of this view, both in Thompson’s lecture and the Botkin sisters’ Strength and Dignity for Daughters, and concluded that logically, it must mean either that men mediate between their wives and Jesus, or that the concept of priesthood has been stripped of all its essential meaning (see here for a more thorough explanation). I also showed that the first option – husbands mediating for their wives – is probably what these speakers actually advocate, as the Botkin sisters have stated explicitly in conference talks that daughters cannot have a relationship with God without their father’s “umbrella.”

So how does all this relate to the communion practices of BCA? Well, since fathers are “high priests” of their homes, they intercede spiritually for their wives in a special way. That is, after all, part of the essential meaning of priesthood: priests mediate between us and God. Without a priest (i.e., mediator), the person for whom the priest is mediating cannot approach God. Logically, then, we must conclude that wives cannot approach God except through their husbands. Thus, since communion is probably the most tangible way of all to approach God, it must naturally never be given directly to a woman but instead to her priest-mediator – her husband.

But Epstein’s description above gets even more bizarre when we read that, in the absence of her husband, a woman’s son or brother, or one of the deacons, can give her communion instead. This goes far beyond even the idea of a “family priest,” and essentially turns men into a “caste” of priests, without whom women have no access to the Lord’s Supper. There are no apparent spiritual qualifications for this priesthood at all, as unbaptized persons who have made no public profession – in this case young boys, since BCA appears to be Baptist – can apparently still distribute the elements to their mothers and sisters. Instead, the only qualification we find in Epstein’s description is the accident of birth, the fact of having emerged from the womb with a penis instead of a vagina….”

In today’s version of godly biblical manhood, etc. there are those who say the only way a woman can possibly be saved is by having children.  According to Bruce Ware, women cannot become Christians unless they submit to men and admit that they are not men.  He then elevates men by putting them in as a factor in women’s salvation.

“...“Ware also touched on a verse from First Timothy saying that women “shall be saved in childbearing,” by noting that the word translated as “saved” always refers to eternal salvation. “It means that a woman will demonstrate that she is in fact a Christian, that she has submitted to God’s ways by affirming and embracing her God-designed identity as—for the most part, generally this is true—as wife and mother, rather than chafing against it, rather than bucking against it, rather than wanting to be a man, wanting to be in a man’s position, wanting to teach and exercise authority over men,” Ware said. “Rather than wanting that, she accepts and embraces who she is as woman, because she knows God and she knows his ways are right and good, so she is marked as a Christian by her submission to God and in that her acceptance of God’s design for her as a woman.”…” 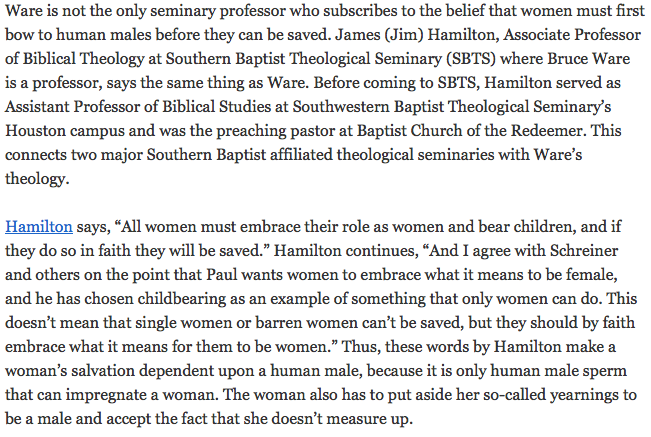 When do we get to call something what it is – evil?