PART IV: Hobby Lobby’s Case Is NOT About Religious Liberty 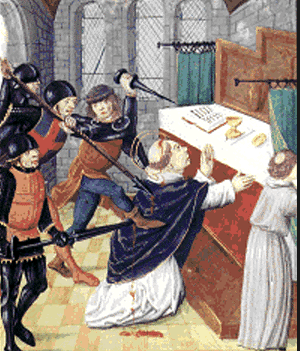 It is rather ironic that David Green has sunk nearly a hundred thousand bucks into the Becket Fund for Religious Liberty.  It is at this point it should be noted that I do have a bit of bias in this tale.  I’m a direct descendant of Henry II, so I’m taking his side of the story.  The irony here is that there is a fundamental question that has plagued us since 1170.  Is religion above the law? If you believe Henry II, then no one, no institution is above the law.

It is one of the great ironies that the tale of David Green, of Hobby Lobby, the self appointed saint, ultra Christian, protector of the purity of women, and hater of ungodly contraceptives has donated so much money to the Becket Fund.  In many ways, the argument between Green and the Obama Administration is like that of Becket and Henry II.

It was called the Constitutions of Clarendon, which served as part of the bases of our Constitution.

“…The Constitutions’ primary goal was to deal with the controversial issue of “criminous clerks,” or clergy who had been accused of committing a serious secular crime but were tried in ecclesiastical courts by “benefit of Clergy”. Unlike royal courts, these ecclesiastical courts were strictly limited in the punishments to which a convicted felon could be subjected; in particular the spilling of blood was prohibited. An ecclesiastical case of murder often ended with the defendant being defrocked (dismissed from the priesthood). In a royal court, murder was often punished with mutilation or death.

The Constitutions of Clarendon were Henry II’s attempts to deal with these problems (and conveniently increase his own power at the same time) by claiming that once the ecclesiastical courts had tried and defrocked clergymen, the Church could no longer protect the individual, and convicted former clergy could be further punished under the jurisdiction of secular courts. It was formerly supposed that Henry wanted all clerks accused of crimes to be tried in the King’s Courts. But this impression, as F.W. Maitland showed, is certainly wrong.[1] A rather complicated arrangement was proposed by which cognizance of the case was first to be taken in the King’s Court.

If the culprit proved to be a clerk, the case was to be tried in the ecclesiastical court, but an officer of the King’s Court was to be present. The officer, if the accused was found guilty, was to conduct him back to the King’s Court after degradation, where he would be dealt with as an ordinary criminal and adequately punished….”

“…“The English king is abusing the patience of the Church and rages continually against the bride of Christ with such inhumanity that Peter, to whose faith and zeal she was entrusted, is compelled to unsheathe his sword [excommunicate the wrongdoers], and in the power of the Holy Spirit to curb the wickedness of those who persecute Christ.”

…”Because we dared to speak out for justice,  calling to mind the obligations of our office and fearing the judgment of God … Finally, we were cast into exile with all who belong to us, clergy and laymen, women and children, weak and strong, so that neither respect for order, nor the circumstances of sex, nor consideration for age held back any of the rage or fury. Many of them have already died in exile; since they were suffering innocently for justice, we trust they have all passed speedily to peace and received  the reward for their labours with the elect.”…”

“…We also believe in sharing our faith, which is why we purchase full-page ads at Christmas and Easter in newspapers in all the major cities where we operate. We also contribute both time and funds to numerous Christian organizations across the nation and the world. Hobby Lobby has always been a tool for the Lord’s work. For me and my family, charity equals ministry, which equals the Gospel of Jesus Christ.

We know that we have been blessed by God’s grace, and we believe it is because we have chosen to live our lives and to operate our business according to His word, and we are very grateful for that.

But now our faith is being challenged by the federal government. The Health and Human Services “preventative services” mandate forces businesses to provide the “morning-after” and the “week-after” pills in our health insurance plans. These abortion-causing drugs go against our faith, and our family is now being forced to choose between following the laws of the land that we love or maintaining the religious beliefs that have made our business successful and have supported our family and thousands of our employees and their families. We simply cannot abandon our religious beliefs to comply with this mandate….”

Pope Alexander responded to Becket’s letter on December 20, 1166.  He basically told Becket to shut up and behave himself.  He was making the church look bad.

“...Telling Becket that he proposes to admonish king Henry, to calm his wrath by careful persuasion so that he might reconcile Becket to himself and restore him to his grace and affection. And hopefully that he will restore Becket to his church freely and peacefully. The pope begs Becket to be prudent and to bear everything patiently until the outcome of the controversy is seen. Until that time Becket is forbidden to decree anything against king Henry, or anyone in his kingdom, which might appears harsh or offensive to him. And he was to keep this detail secret….” 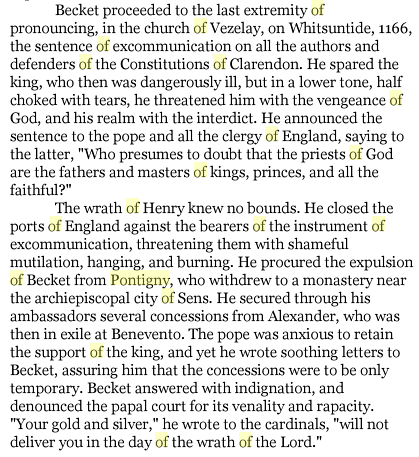 History of the Christian Church, Vol V. The Middle Ages

Pope Alexander, when Henry sent John of Oxford to meet with him, strongly suggested that Becket was wrong, having been inspired by the Abbott of Pontigny and the Cistercian Order, where he was living in exile.  It should be noted that at the time, the monks were making the finest wines in Europe.  The pope then began taking Henry’s side of the argument.  As the  years went by, Alexander realized that Becket was not being as honest as he could be.  If he had not been murdered on December 29, 1170, it is entirely possible, history would not look upon him as a martyr and a saint, but rather a pig-headed jerk who thought he was more important than he actually was. 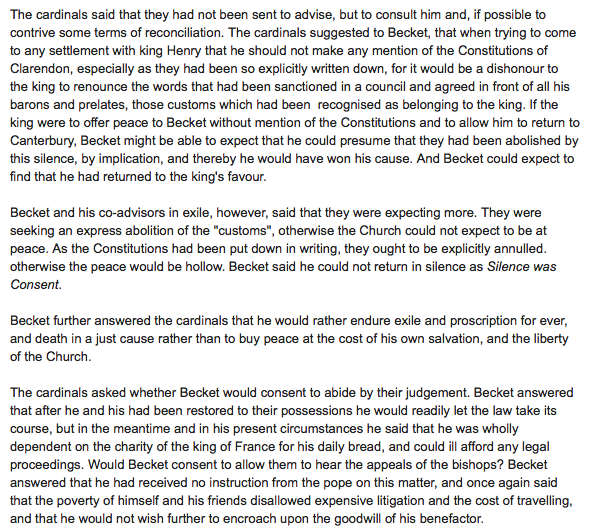 Becket responded by excommunicating not only the King, but anyone who disagreed with him. The Pope told him to can it, but Becket was basically out of control. And so, one night, drunk and angry, Henry uttered the infamous:

“...As long as Thomas lives you will never be at peace.  A fellow that has eaten my bread, has lifted up his heel against me; a fellow that I loaded with benefits, dares insult the king; a fellow that comes to court on a lame horse, with a cloak for a saddle, sits without hindrance on the throne itself.  By the eyes of God, is there none of my thankless and cowardly courtiers who will deliver me from the insults of this low-born and turbulent priest?”

“…...The wicked knight leapt suddenly upon him, cutting off the top of the crown which the unction of sacred chrism had dedicated to God. Next he received a second blow on the head, but still he stood firm and immovable. At the third blow he fell on his knees and elbows, offering himself a living sacrifice, and saying in a low voice, ‘For the name of Jesus and the protection of the Church, I am ready to embrace death.’ But the third knight inflicted a terrible wound as he lay prostrate. By this stroke, the crown of his head was separated from the head in such a way that the blood white with the brain, and the brain no less red from the blood, dyed the floor of the cathedral. The same clerk who had entered with the knights placed his foot on the neck of the holy priest and precious martyr, and, horrible to relate, scattered the brains and blood about the pavements, crying to the others, ‘Let us away, knights; this fellow will arise no more….”

Even of Hobby Lobby loses, the fight will continue.

“...The Alliance Defending Freedom has also been outspoken in its support of Hobby Lobby, even staging a “Nine Weeks of Prayer” campaign in the weeks leading up to the Supreme Court hearing arguments in the Hobby Lobby suit. “You, your family, and your church” are urged to “Pray for the Christian family who founded and own Hobby Lobby, Inc.” and “Pray God would bless and protect the Green family as they continue to lead their company with integrity.”

Even if Hobby Lobby loses its suit against the U.S. government, groups funded through the National Christian Charitable Foundation will continue to test the limits of the legal system’s interpretation of religious freedom. The Alliance Defending Freedom itself is the organization behind McCullen v. Coakley, a case its lawyers argued in front of the Supreme Court in January challenging the constitutionality of a Massachusetts law that creates a buffer zone around abortion clinics; the Alliance Defending Freedom lawyers argue that the law creates a “censorship zone” for antiabortion protesters.

While Becket is an interesting tidbit of history, his determination to stop the evolution of Henry II’s legal changes were a total failure.  Today, we owe our modern version of Common Law, the concept of the Constitution of the United States, and the very bedrock of our very judicial system to Henry II.  The laws he created are exactly who and what we are.  They are the reason the US and the UK are different from other countries when it comes to the law.

One wonders if David Green and his supporters are able to comprehend the bitter irony of their actions.  If the fate of Thomas a Becket is any indication, they are going to go down in flames.  The moral of the story about Becket is that no one, no matter how rich and powerful is above the law.