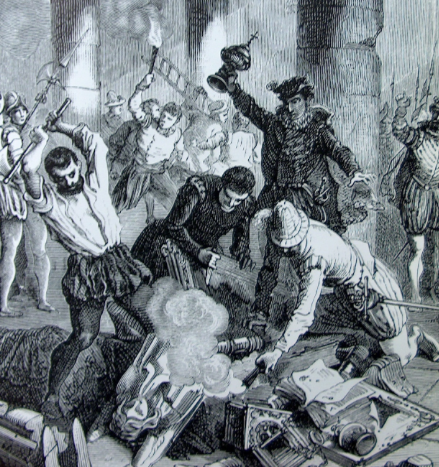 The problem with Christian Reconstructionism is that it has a tendency to allow those involved to forget about having a personal relationship with Christ.  It is about rules, cruel, hard rules that have nothing to do with the teachings of Christ.  In fact, the rules involved have nothing to do with anything previously seen by Christians or Jews.  R. J. Rushdoony and his henchman, Gary North (AKA Scary Gary) created a new religion.  While the followers of it claim to be Christian, they are not practicing a previous form of our faith.  There’s nothing wrong with starting a new domination, but there are basic philosophies, basic theology, and certain things that are hard and fast rules.  The problem with the new religion created by Rushdoony, is that he’s not bothering with this.  What he keeps, he alters until what is being practiced is unrecognizable.

“...Even without being corrupted by power, Rushdoony’s political intentions looked to be far more extreme that those of Adolf Hitler, Stalin. Chairman Mao or Pol Pot. He appears to have had no respect whatsoever for democracy – “The church today has fallen prey to the heresy of democracy.” (The Institutes of Biblical Law page 747.)

Like all would-be dictators, Rushdoony had no respect for the law (that is, any law that stands in his way) –”The only true order is founded on Biblical Law. All law is religious in nature, and every non-Biblical law-order represents an anti-Christian religion.” (Institutes of Biblical Law, page113) He also made it clear that he expects that force will be necessary to impose such order, “Every law-order is in a state of war against the enemies of that order, and all law is a form of warfare.” (Institutes of Biblical Law, page 93).

It should not be surprising to learn that Rushdoony had an intense dislike for toleration of other peoples’ opinions. Indeed, a central belief in his fantasy world was of segregation and/or separation according to religion and morality. The use of the term segregation also implies an underlying racism which we will see more of in this report.

Rushdoony believed that every attempt to destroy the principle of toleration (except toleration of himself and his murderous views) is an effort to reduce society to its lowest common denominator. Toleration is the excuse under which this levelling is undertaken, but the concept of toleration conceals a radical intolerance. “In the name of toleration, the believer is asked to associate on a common level of total acceptance with the atheist, the pervert, the criminal, and the adherents of other religions as though no differences existed.” (The Institutes of Biblical Law page 294.)

To put it simply, those that disagree with Rushdoony are the same as perverts and criminals….”

It’s about politics, to the point where religious conservatives like David Barton, Glenn Beck, Michael Farris (the rapists’ best friend), ALEC, the John Birch Society, are calling for major changes to the Constitution. There’s a reason for this. Rushdoony created his movement to bring about God’s rule on Earth. Like what just happened in the state of Alabama, good ‘Christian’ politicians are literally lying and cheating to get their way. They don’t care. There is no morality. There is no decency.

There are two kinds of Dominionists:

“...Soft Dominionists are Christian nationalists. They believe that Biblically-defined immorality and sin breed chaos and anarchy. They fear that America’s greatness as God’s chosen land has been undermined by liberal secular humanists, feminists, and homosexuals. Purists want litmus tests for issues of abortion, tolerance of gays and lesbians, and prayer in schools. Their vision has elements of theocracy, but they stop short of calling for supplanting the Constitution and Bill of Rights.

Hard Dominionists believe all of this, but they want the United States to be a Christian theocracy. For them the Constitution and Bill of Rights are merely addendums to Old Testament Biblical law. They claim that Christian men with specific theological beliefs are ordained by God to run society. Christians and others who do not accept their theological beliefs would be second-class citizens. This sector includes Christian Reconstructionists, but it has a growing number of adherents in the leadership of the Christian Right….”

There are 15 crimes punishable by death for Christian Reconstructionists.

Rushdoony also was something of a racist. He believed in slavery. You can acquire slaves to pay off debt, as punishment for theft, capture in war, or by purchase. Rushdoony also thought the American Negro was better off being a slave. Only white Christians should be citizens and allowed to vote. Married woman may vote, if their husbands allow it. Jews will not be recognized by God. American Indians cannot vote. The wealthy are important, the poor are to be used and manipulated. His movement is embraced by Neo-Confederates. They are libertarian. Ron Paul is their god on earth. Somewhere in here, you will also find the Koch Brothers. Who do you think is funding the revolution?

This is a new religion.  It is NOT Christian.  It is incompatible with freedom, liberty, democracy, individuality, and independence. It requires allegiance to the group, punishment, dogma, the subjugation of women, abuse of children, and abuse of women.  There is no room for individual though. Democracy is heresy.  Any disobedience from the rules begets death.

In fact, that’s what Christian Reconstructionism is all about – death.  It is about the brainwashing of previously stalwart believers.  It fosters betrayal, deception, cruelty, and dishonesty. Anyone who is familiar with the Bible knows that there is a way of ‘means testing’ things.  It’s quite simple.

I don’t know about you, but I’m just not seeing this in Christian Reconstructionism.  Part VI continues tomorrow, with a discussion about the background of Calvinism and what religious extremism like what Rushdoony envisions had done to people.