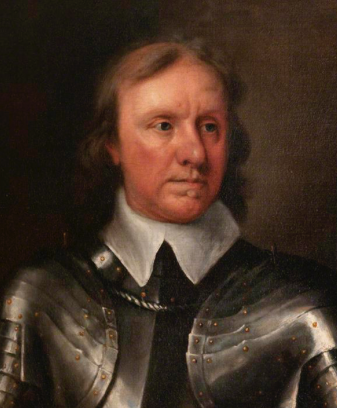 Oliver Cromwell was one of the most evil individuals in history.  When I was in London, going through Westminster Abbey, I had the great honor of stomping on the spot where his head was buried. I suspect that I detest him more than any other single person in history.  More of my ancestors died, because of him, than due to any other cause of death other than old age. He is what happens when extreme Calvinists take over a country.  This is the type of thing R. J.Rushdoony envisioned, a nation based on Calvinist, a Cromwellian dictatorship of pure hatred, obscenity, and cruelty, all in the name of Christ.  He was a dictator, with methods compared to those of the Nazis.

Because of Cromwell,  nearly 200,000 people died, out of a population of about five million. In Ireland, it is estimated that 112,000 Protestants and half a million Catholics died by plague war and famine.  In Scotland around 60,000 people died.  England lost nearly 4% of its population, Scotland 6% and Ireland lost 41% of its population.  This is what Rushdoony’s followers would do to the United States.  I calculated that, of my immediate circle of friends and family, if you follow the edicts proposed by Gary North, not only would my entire family be slaughtered, but I’d also be dead – for heresy.   Their theology is derived from John Calvin, who was a monster, sociopath, and a murderer.

The thing that bothers me the most about the tendency toward Christian Reconstructionism and the lies that are told about the Christian faith is that what has evolved from this extreme version of Calvinism is not what Christianity is all about.  The worst of it is how people – good people are being led astray.  The honest fact here is that, if my faith weren’t strong enough, and if I did not know the difference.

The series continues tomorrow with the reason for my current rant and rave.  Trust me, it’s well worth losing it.