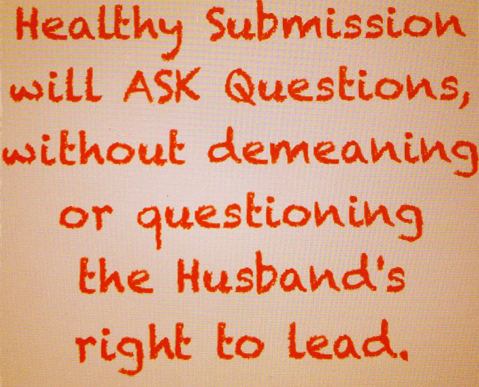 There is a very real problem here. According to the propaganda put out by the Council on Biblical Manhood and Womanhood, I’m in deep shit. As a woman, who is not married, with no authority figure in my life, I’m to sit down, shut up, and do what I’m told. If this is what the modern version of being a Christian woman is all about, well, then take this religion and shove it. I completely reject what they are saying. You can’t dress nice. You can’t so anything but go to a church, and sit and worship -not God – but the men representing God. No matter that we are told that in Christ there are male nor female.

Galatians 3: 23-29 23 Now before faith came, we were imprisoned and guarded under the law until faith would be revealed. 24Therefore the law was our disciplinarian until Christ came, so that we might be justified by faith. 25But now that faith has come, we are no longer subject to a disciplinarian, 26for in Christ Jesus you are all children of God through faith. 27As many of you as were baptized into Christ have clothed yourselves with Christ. 28There is no longer Jew or Greek, there is no longer slave or free, there is no longer male and female; for all of you are one in Christ Jesus. 29And if you belong to Christ, then you are Abraham’s offspring, heirs according to the promise.

Okay, so if, according to Paul, writing in Galatians, I’m the same as a man, then why the hell is Bruce Ware telling me that I’m not as good as a man. Yep, Bruce Ware really did utter this shit:

“…Ware also touched on a verse from First Timothy saying that women “shall be saved in childbearing,” by noting that the word translated as “saved” always refers to eternal salvation. “It means that a woman will demonstrate that she is in fact a Christian, that she has submitted to God’s ways by affirming and embracing her God-designed identity as-for the most part, generally this is true-as wife and mother, rather than chafing against it, rather than bucking against it, rather than wanting to be a man, wanting to be in a man’s position, wanting to teach and exercise authority over men,” Ware said. “Rather than wanting that, she accepts and embraces who she is as woman, because she knows God and she knows his ways are right and good, so she is marked as a Christian by her submission to God and in that her acceptance of God’s design for her as a woman.”…”

“…Hamilton says, “All women must embrace their role as women and bear children, and if they do so in faith they will be saved.” Hamilton continues, “And I agree with Schreiner and others on the point that Paul wants women to embrace what it means to be female, and he has chosen childbearing as an example of something that only women can do. This doesn’t mean that single women or barren women can’t be saved, but they should by faith embrace what it means for them to be women.” Thus, these words by Hamilton make a woman’s salvation dependent upon a human male, because it is only human male sperm that can impregnate a woman. The woman also has to put aside her so-called yearnings to be a male and accept the fact that she doesn’t measure up…”

Because I’m not fullfilling the traditional role God intended me to have, I’m vulnerable to the influences of Satan, but godly women who are having children and submitting to their husbands have added protections. They don’t have the problems I do, because I’m not submitting to the man of the house. This is according to theologian Andreas J. Köstenberger.

“…The above presented interpretation of 1 Timothy 2:15 also strongly affirms a complementarian understanding of biblical manhood and womanhood. Women, like men, were assigned by their Creator certain roles, and it is part of “working out our salvation” (Phil. 2:12) to adhere to these roles in our Christian lives and ministry. Salvation in Christ does not obliterate these role distinctions, as egalitarians claim-it rather aids believers in living once again within the parameters originally established by the Creator, as creatures saved from the curse of sin and restored to God’s original design for men and women.

At the same time, the interpretation of 1 Timothy 2:15 advocated here has explosive implications for so-called “biblical feminism.” For if our reading of 1 Timothy 2:15 is correct, women will be vulnerable to Satan if they devalue and abandon a focus on the family and the home or encourage others to do so. They would be an easy prey for his age-old enticement (see Gen. 3) that the roles assigned to creatures by their Creator are too confining and that people must rebel against these roles and find self-fulfillment apart from God. In light of the fact that teachers will be judged more severely (Jas. 3:1) and that Jesus held the Pharisees responsible for not only failing to abide by God’s standards themselves but also leading others astray, those who encourage women today to ignore God-ordained parameters in the way they function in the church need to ponder seriously the weighty consequences of their actions.

By clarifying the message of 1 Timothy 2:15, we also hope to commend the passage’s teaching to those who previously did not apply it because they did not understand it. 1 Timothy 2:15 does not merely contain an obscure, situation-bound injunction for women in Timothy’s Ephesus at the end of the first century A.D. It is grounded in the wise counsel of the Creator and pertains to the sphere of the outworking of our salvation in this life. How are women kept safe from the allurement of Satan? How are they to avoid falling into temptation as Eve, the mother of women, did? By adhering to, and finding fulfillment in, their God given role centering on the family and the home….”

A member of the Baptist council on Biblical Manhood and Biblical Woman, Köstenberger wrote:

“...Finally, the most common interpretation among conser-vative evangelical interpreters today is that women will eventually be spiritually saved by adhering to their God-ordained role centering around the home. This view seeks to alleviate the difficulty of the phrase “saved through child- bearing” by interpreting the term “saved” as referring to a woman’s consummated salvation on the last day rather than the salvation she already has received at the time of her con- version. And “childbearing” is understood as referring not merely to the birthing process but, by extension, also to the raising of children and the managing of the home….”

According to Shirley Taylor, now, the only way a woman can receive salvation is through the act of being impregnated by a man, God’s representative on earth. Godly Womanhood is solely dependent upon men. We are saved by baby-making and not by asking for forgiveness of sins and turning to Christ. We are saved only when a godly man decides he wants to have sex with us and impregnate us. The man, this godly example of Biblical manhood becomes the instrument of salvation by the act of impregnation. In other words, he becomes as Christ. He also then has the power, by the act of not impregnating, to chose which women go to heaven and which women go to hell. Do they even realize what they’re saying and doing?

In 2004, Dr. N. T. Wright, the Bishop of Durham delivered a conference paper on Woman’s Service in the Church: The Biblical Basis. Dr. Wright is Anglican. Thank heavens for the Three Legged Stool of reason, tradition and scripture. Thank heavens for Anglican and Episcopalian! It’s amazing how the same verses are seen so completely differently.

“…The key to the present passage, then, is to recognise that it is commanding that women, too, should be allowed to study and learn, and should not be restrained from doing so (verse 11)….Now if you were writing a letter to someone in a small, new religious movement with a base in Ephesus, and wanted to say that because of the gospel of Jesus the old ways of organising male and female roles had to be rethought from top to bottom, with one feature of that being that the women were to be encouraged to study and learn and take a leadership role, you might well want to avoid giving the wrong impression. Was the apostle saying, people might wonder, that women should be trained up so that Christianity would gradually become a cult like that of Artemis, where women did the leading and kept the men in line? That, it seems to me, is what verse 12 is denying. The word I’ve translated ‘try to dictate to them’ is unusual, but seems to have the overtones of ‘being bossy’ or ‘seizing control’. Paul is saying, like Jesus in Luke 10, that women must have the space and leisure to study and learn in their own way, not in order that they may muscle in and take over the leadership as in the Artemis-cult, but so that men and women alike can develop whatever gifts of learning, teaching and leadership God is giving them….“

He goes on to say that claiming that women are to be put down is a wicked thing! Let’s hear it for the Anglicans and we Episcopalians. Then again if you are a Baptist, then women are to submit to male authority and keep quiet in church.

And so, we are told that childbirth is the very essence of being female. Bull you know what. What about all those women in the Bible who were infertile? What about women, over the years, who have given up having a family in order to work for Christ? What about all those women who became nuns and led holy sequestered lives? Did they all go to hell? If you listen to the new version of Baptist, well, I guess they did, unless they had some godly man impregnate them and with his godly sperm give them salvation.

This is the goodly, Calvinist world that R. J. Rushdoony is creating in the United States. If I did not know the difference, of what the normal Christian faith is to be, I would, after writing this post, say enough is enough and walk off, never to return. I can’t tolerate the world the godly Baptists who want Godly Manhood and Godly Womanhood. It’s not my world. I don’t subscribe to a world where women’s salvation is dependent upon a man’s sperm.

The great tragedy is that people are starting to believe this sh*t. There will be thousands of women who will believe it is true, and turn their back on Christ. I don’t blame them. I would too, if I didn’t know any better. That’s the great evil of it all. When a Christian causes someone to stumble in their faith, that’s also quite evil.