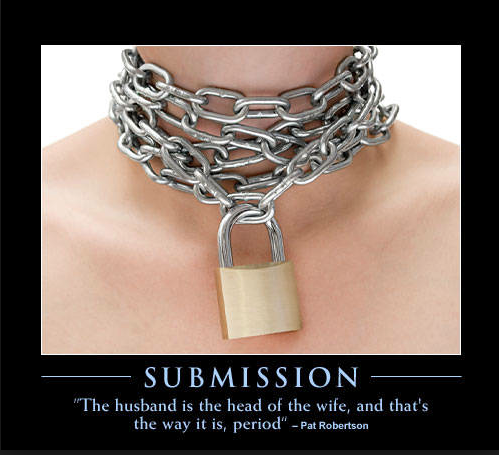 The Bible teaches that men and women are created equally.  We are created in God’s image.  Christ came to redeem women as well as men.  There is no difference.  At Pentecost, the Holy Spirit came to men and women, equally.  Adam was just as culpable as Eve. No one in their right mind should even think that the godly and well meaning godly men who are advocates of the ‘complementarian’ way of life are intentionally abusive to women.  Sure, a few may be.  It is a system that basically attracts jerks of all shapes and sizes.  It is a recipe for abuse.

“…In 2009, John Piper, an influential celebrity pastor, was asked a question. “What should a wife’s submission to her husband look like if he is an abuser?” Desiring God Ministries filmed the answer and uploaded it to their website as usual. Piper’s answer started off with a giggle and continued on to explain that a wife should remain submissive to her abusive husband. After receiving criticism, Desiring God removed the video.

But nothing is truly forgotten in the internet age, so almost 4 years later, Piper wrote a post to clarify his Q&A. He did not regret being insensitive or putting women (and children) at risk. He simply felt that he needed to expound for the masses that had misunderstood him. Possibly fearing legal consequences, he stated that women might need to go to the police. But there are at least three things that Piper must correct if he wants to answer the question with truth….”

We should also be quite up front in stating that there are women who truly want to stay home, raise the kids, and be a housewife.  More power to them.  My mother did this.  So did my grandmother, and my sister did.  Then she lost her mind and opened three restaurants in Memphis. Before losing her mind, she raised three very successful children, homeschooling them.  No, her version of homeschooling and today’s religious version have nothing in common.  My two nieces and my nephew are extremely well educated.  There was nothing submissive about my grandmother (either one), my mother, and my sister.  She raised two daughters who are far from submissive.  She raised a son to respect women, and treat them as equals.  Event thought they were homemakers, they were far from helpmeets.

There’s something wrong with a movement where men not only dislike women, but treat them like abject dirt.  When godly men have no respect for women, there’s something terribly wrong. Take Mark Driscoll, please.  I know, it’s an old joke, unfortunately, nothing about Driscoll is very funny.  Like Bill Gothard, he’s a pervert, plain and simple.  If I were a member of his congregation, or attended his church, and had children under the age of 21, I’d be raising you-know-what.  Fact is, it is rather strange, and a testament to the cult Driscoll has built, that parents haven’t exposed his X-rated sermons.  They are NOT something you would want a child to hear.  Ages ago, he posted on a forum under the original name of William Wallace II.  This is one of his comments to a woman who asked a question.  Thanks to Rachel Held Evans for exposing him, like the cheap, dirty flasher that he is.

“…“I speak harshly because I speak to men. A woman might not understand that. I also do not answer to women. So your questions will be ignored. I would however, recommend to you a few versed to memorize: I Timothy 2:11-15 I Corinthians 14:33-35.To learn them, ask your father or husband. If you have neither, ask your pastor. If she is a female, find another church. If you are the pastor, quit your job and repent.”…”

This is a man who has no respect for women, at all.  There was a recent study, conducted on 300 college students.  Young men who read magazines that objectified women did not respect them, and don’t respect sexual boundaries.  From what I’ve heard and read of Driscoll’s sermons, he is proof that an X-rated mind doesn’t respect women.  He has none.  In a way, Driscoll’s perverted and X-rated view of women fits in with a recent study that suggests evangelicals are more likely to cheat on their spouses, than atheists!  One sociologist stated that not only are they more likely to cheat, but less likely to feel guilty about their cheating!

“…Slut-shaming collapses the complexity of another person onto a single dimension. But even more so, given how slut-shaming is used to control and shame all women regardless of their sexual practices or desires, it conflicts directly with respecting them. If you say that you respect women, then you need to respect all women, no matter how many sexual partners she has, her relationship choices, or how she enjoys sex. Otherwise, you’re saying that that your respect is something that someone has to buy. I don’t think that that’s really respect at all….”

What sort of a man demands women submit to him?

“...Insecure men are just fine with women who make themselves appear smaller than they are to please men. They love women who make themselves look dumber than men. And a woman being humble is just fine with them. But let the woman step outside the box the man has built for her, and… Hell hath no fury like an insecure man who feels his ego threatened by a lowly female….” Mara

As we shall see, even the less radical forms of Islam have nothing on the growing trend in far right circles to require and demand women be submissive.  By requiring women to be submissive, it is a recipe for abuse.  The requirement of wifely submission is something fairly new. I grew up in first the Presbyterian church, then Baptist, was asked to leave a conservative Presbyterian church because I mentioned that any fool who mixes religion and politics should go to hell.  I was paraphrasing Goldwater.  Then, I became an Episcopalian.  There is one thing, at the time, that all of these churches had in common.  They did not even mention submission.  Abortion was a necessary evil.  Contraceptives were the norm. Women were the equal of men.

Something has changed, and is changing.  It is growing more and more powerful by the week, threatening the very foundations of our culture.  It is not Christian.  While the followers claim that it is based in the Bible, it is not.   It ends only when Christians get their head out of the sand and realize what is going on, and put a stop to it.

This is the first of five parts.