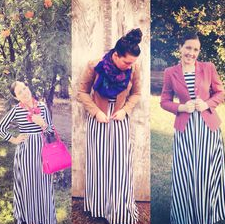 “…When I think about my clothing choices in college it simultaneously convicts me of immodesty and helps me understand the struggle girls face trying to be modest. I wasn’t trying to be inappropriate. I just wanted to look good. I was single. I wanted to be attractive to girls and I wanted to be affirmed by other guys. For me to be modest I would have needed to wear looser shirts that I didn’t think looked as good on me. That would have been tough. And making that tough decision would have made me much more appreciative and considerate of my sisters in Christ….”

Several years ago, godly men decided to conduct a godly test of godly young men dealing with the topic of godly women, godly fashions and ungodly lust.  The results were so convoluted, so strange, and so weird, all links to it have been deleted.  Thanks to Wayback Machine, we can view those strangely perverse results.

A little fashion background.  The world changed in the late 1700s.  First was that little rebellion across the Pond, then there was the unpleasantness in France, followed by a short Corsican with delusions of grandeur.  Each can be tracked by fashion.  In many ways, fashion caused the problems.  In England luxury taxes became so obscene that even the wealthiest of peers could not afford the powdered wigs and extravagant silks and satins of the high Georgian years.  The reason for the high taxes, which nearly destroyed a country was because a bunch of bust-headed anti-tax libertarians across the Pond felt that they should not be required to pay taxes for the upkeep of their growing little colony.  Ironically, the same bust- headed anti-tax libertarians who are also the backbone of the Christian Reconstruction movement are their step-children.

In order to avoid paying high taxes, and, even more importantly, to emulate the French, women in England dumped the wigs, the panniers, and the absurdities of the previous fifty years and went along with the flow.  Women in France, in order not to be identified with the outgoing royal headless, had drastically begin changing what they wore, beginning around 1790 or so, with the chemise dress.  By 1796 or so, they had dumped the corset, petticoats, panniers, and everything else, so that they could wear extremely sheer high-waisted gowns that were usually short-sleeved, and cut, very low.  They were cut so low that what was once worn inside a corset was now worn on the outside, for all to see.  There were holes cut in the rear, on the sides and other places.  In England, where they were wearing sheer white muslin, someone had the bright idea of dampening the fabric, so that it would be transparent.  Once again, nothing was worn under the gowns except for stockings that came up to the knee.  Napoleon liked the way Josephine looked, so much, that the new fashions were called Empire.  In England, they were known as Regency.

That was nice.  Then, one day, around 1816 or so, a big, bad, volcano erupted.  The planet experienced climate change to the point where there were several years without summers.  It was cold.  The Brits were still paying very high taxes on the glass in their windows (which they had removed), so women decided they would wear fancified versions of men’s underwear.  This, for the very first time in history, women began wearing underwear.  Necklines, were much higher.  Short sleeves disappeared.  Then, the waist grew longer.  Skirts became fuller to the point where the hoops needed to support the skirts could make the most embarrassing movements.  Long underwear – for women, became required.  Besides, baby, it was cold outside!  Modern fashion sensibilities were born.

No, modesty had nothing to do with it.

The modesty survey was conducted during a 20 day period in January 2007.  1,600 Christian ‘guys’ submitted 150,000 answers including 25,00 text responses.  The survey was endorsed by:  Shaunti Feldhahn, Nancy leigh DeMoss, Albert Mohler, Shannon Ethridge, and C. J. Mahaney.    Thanks to WayBach Machine, you can even view the survey results:  I have been locating comments from the survey.  NOTE:  Comments from the survey have been taken from different sources.  The original is no longer available.

Years later, one of the people involved in the survey, wrote about how it never should have happened. There is a bottom line. The whole ‘modesty’ industry is male oriented, with a bunch of self-righteous women trying to tell the rest of us how to live and dress. They take their cues from a man’s version of how women should dress – 2000 years ago. I wonder if they take into consideration that, at that time, women did not wear anything under their gowns. Do we go around without bras and panties because they had not been conceptualized during the time of St. Paul?