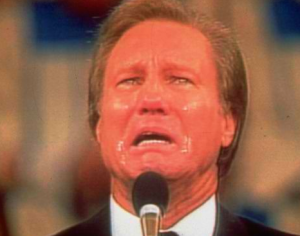 Recently, a godly family youth minister wrote an article in a godly magazine detailing how ungodly his godly life is, now that he is in prison for having an inappropriate relationship with someone from his godly ministry (read rape). It took forever, and a huge outcry for the godly magazine to finally remove the article. Samantha Field has a heart-wrenching observation of this sort of thing. The godly man who raped her is now a youth pastor.

“…Which is why I haven’t been able to read the piece that the Leadership Journal published this week. I have tried, many times, over the past few days to make my way all the way through it, but I can’t. It … it sounds like him. My rapist. It is exactly what my rapist will say when he rapes one of the girls in his care, if he is successfully convicted as so very few rapists are.

He’s a youth pastor. His church probably subscribes to the Leadership Journal. And . . . I . . . oh, GOD!! I don’t want to picture him reading this because I know what that will do. He will read it, and everything that is inside of him, everything about him that would make the rest of us recoil in horror, will rise up in glee. Because here, here is a man who understands him. And he will feel justified, because he knows that a journal dedicated to Christian leadership wasn’t able to see the atrocities in his heart. And he will tell himself that the girl he is grooming wants it, wants him, and it’s only an affair. It’s not rape. It’s romantic…”

Former godly minister Jack Schaap is spending the next decade in prison for molesting a 16-year-old girl who came to him for help. He is now saying that he wants out of the slammer. She led him on. She caused him to sin. It was all her fault. Of course that is the ATI playbook. Blame the victim. Force them to apologize, then skip off, to live happily ever after on all those godly book residuals. Like Bill Gothard and Dougie Phillips, Schapp became just a little too cozy with a young woman, this one being 17. He said she led him on before he was entrapped by her.

One of the very real problems here is Calvinism, and Al Mohler, who has been the go-too dictator for the SBC for several decades. In an article about seminary grads, resumes, and the dictatorial practices of Mohler. She was writing about changes to the SBTS, but in many ways, it not only applies to that, the SBC in general, and basically most of the far right religious groups who engage in Calvinistic patriarchy. Her comment is to expect ‘lukewarm response’ in dealing with child sex abuse, where, in the past, they have talked a good game, but the exact opposite is true. In fact, one seminary official, Philip Gunn, has instructed church leaders NOT to speak to the cops about meetings they have had with alleged pedophiles. He claims it is about ‘priest-penitent’ privilege. Even more disturbing is the fact that Philip Gunn is a member of the Mississippi House, as a Republican. Not only was he advising the clergy, but claims those privileges for church elders and deacons. According to Amy Smith, of SNAP (Survivors Network of those Abused by Priests):

“...“It is very troubling that Philip Gunn as the legal representative for Morrison Heights Baptist Church is trying to keep information from Hinds County prosecutors about a recently arrested and indicted child molester on whose behalf Gunn attempted to ‘discuss a resolution’ with me last May.”

“It certainly seems that Mr. Gunn has some explaining to do about why he, as an elder and attorney, participated in an internal church investigation into child sex crimes without going to the police. It raises the question of what he and the church leadership are trying to hide that could help effectively prosecute a confessed child molester.”..”

Evidently, these people have this thing about defending pedophiles. Several years ago Doug Wilson even presided over the marriage of a pedophile. Steve Sitler, pedophile, found a defender with fireball godly Wilson, who defended him. Wilson is so far removed from the realities of normal life, even the SPLC is keeping an eye on his Moscow, Idaho church. One of Wilson’s godly habits is hanging out with white supremacists, and hard-core racists. Wilson, a godly man, thinks that slavery was acceptable, and so forth and so on. According to the SPLC:

“...Now, Wilson is back in the news. This summer, the Moscow-Pullman Daily News published a story on “rumors” that Wilson, who controls an extreme-right religious empire in Moscow, and his New Saint Andrews College had tried to “cover up” serial sexual molestations by a college student — molestations of very young boys and girls carried out over several years. Although the newspaper quoted none of them, many people were angry that Wilson had failed to notify families in his Christ Church for eight months after Steven Sitler confessed to him in March 2005. One church family with young children had boarded Sitler, and others welcomed him as a visitor in their homes (Sitler molested one 2-year-old girl in a similar visiting situation in Colville, Wash.). Critics complained that Wilson’s lack of action had eliminated the possibility of identifying other victims in the community.

Wilson and college officials told the newspaper that they had immediately kicked Sitler out of school and notified police of his crimes, but decided not to inform members of the public because of concerns for victims’ privacy.

Five months after Sitler’s confession, another man who had been boarded by a Christ Church family while he studied to become a minister there was arrested and ultimately pleaded guilty to lewd conduct with an underage girl. When details of the matter came up on a local blog run by a disgruntled Wilson follower, part of the pastor’s response was to liken the blogger to “a sucking chest wound.”

The father of the girl in the second incident told the Intelligence Report that church officials tried to keep that quiet as well. At one point, he said, they threatened to bring him under church discipline for failing to protect his daughter. “It would be like me getting robbed and the police coming over and arresting me because I didn’t have five locks on the door, only one,” he said. “It was just bizarre.”…”

Wilson wrote that he felt Sitler was ‘delusional’ when he was molesting children. It should be noted that godly Wilson has no training in psychology, the ministry, and is not ordained, yet he presides over a cult. That’s okay. John Piper approves of him. According to Boz Tchividjian, who is the leading authority on fighting pedophiles in religion, there is a problem. One of the hallmarks of a really good pedophile is working with children. Pedophiles gravitate toward the teaching professions, day care, and churches. The average church member is so decent and so innocent about these things that the possibility of a pedophile even preying on their children is just not even part of their thought process. Thanks to the teachings of Gothard (who has been accused of failing to report child abuse), churches, these days, have a habit of demanding the victim and their family be required to forgive the pedophile, abuser, or rapist. Then, they might call the cops. It should also be noted that Catholic clergy are no more likely to abuse children than clergy from other religions, or men in general.

“…Abusers in faith communities know that from the earliest of ages, children are taught to “respect and obey” those in authority. This propels these offenders to actively work themselves into leadership positions in churches and other faith based organizations. Once authority is grasped, it is immediately exploited to the point that their power and control is justified as being sanctioned by God. The resulting culture is one in which abuse is shrouded in silence and seldom questioned…”

The worst part of this is when you have godly ‘leaders’ like Gothard and Philips preying on young women, teenage girls, those who must be forced to submit to their authority in what is obviously sexual harassment, people like Kevin Swanson and Debi Pearl defend them. She wrote:

“...I trembled as I read this. Shock, disbelief, and then sadness enveloped me as I realized it was not CNN with all their exaggerations, deceit, mockery and twisting of facts that brought an end to a work God used to set thousands of people free from bitterness, it was not the Homosexual websites coming together to launch war against an old man accused of things done over 35 years ago, limiting his ability to defend himself. No, it was a “Christian” website that asked believers to speak out if they had been hurt in anyway, and spew their bitterness so many could share in the rock throwing. Yes, you read it correctly, it was a Christian website propelled forward by Facebook and Twitter that defamed a ministry that helped millions come to know the Lord….”