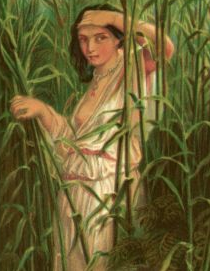 “...Christian Patriarchy is idolatry. It is worshiping man in the place of God because it equates an individual man’s will and views to God’s will and views. God and man combine and become one, and the women are left trying to swim in a swirling cloud of authority where what is human and what is divine has become too closely related to separate and even, indeed, one and the same…”

It is also heresy.

According to sociologist Sylvia Walby, there are six overlapping things that define patriarchy, over the years.

As we have seen with Jen’s story, Patriarchy is abusive. It is part of a cult which has as its hallmark, total and complete control of manipulation of the women in a congregation, and in their lives. It is also very much NOT Biblical.

“…While much of what Doug Phillips teaches regarding Patriarchy sounds biblical, because of the lack of practical application, his teachings are often taken to extremes. Sometimes, men just hear his vision of men always “leading,” and they become domineering and demanding, causing undue stress on the wife. I know of one family that divorced precisely because of hearing this teaching and not understanding what it really should be. Sometimes, men will try to emulate what they see in Doug Phillips, and start requiring their families to have all the same rules as the Phillips. Unfortunately, if there are no personal convictions behind the rules, they soon become extremely oppressive and smother the family. Some men just have no clue about how to “lead” their families; they just know that it’s being constantly preached at them from the pulpit. Having come from a home without a godly leader, these men need lots of practical examples….”

Did you know that there are over 31,00 verses in the Bible, it isn’t until 1, Ephesians 5:23, that states that a man is to have headship of his wife? But, as usual, patriarchs, the menfolk, those who detest feminism, in a world begun by R. J. Rushdoony, don’t bother with the rest of the passage which includes a few other verses comparing husbands = marriage and Christ = church. In other, they pick and choose, then manipulate and and change.

“…Male Christian leaders have been making this point for centuries. Why aren’t women listening? Martin Luther, patron saint of the Protestant Reformation, minced no words: “If a woman grows weary and at last dies from childbearing, it matters not. Let her only die from bearing; she is there to do it.”

See Genesis 3. And 1 Timothy 2:15, which says women will be saved through childbearing. And 1 Timothy 5:13, the source of the comment about women who are idle tattlers and gossips. And 13 other Bible verses that tell us exactly what the writers thought of women. If she dies, she is there to do it. Luther had this on very good authority. …”

“…False teachers who will secretly bring in destructive heresies. Phillips and his hyper-legalist Patriarchal teaching put men, husbands, fathers and the Institution of Marriage on such a pedestal that it was idolatry. Rank idolatry. They hooked people in to this false teaching by an airbrushed promotion of ***Christian family values and godly manhood which puts women and children first*** through Home Schooling conferences and the Mens and Boys’ Titanic Society, and then enforced it with the velvet-gloved manacle of guilt-inducing covert coercion, thereby getting people, particular females, to suppress and doubt their own consciences and guidance from the Holy Spirit in order to follow, like the brainwashed animals in Animal Farm, the Big Brother Leader Phillips and his Patriarchal henchmen…”

An interesting, but shocking poll was taken of women who had been forced to live in patriarchal situations. They were living in the United States of America. I don’t know who they were or what their situation was, other than they were under the total control of the men in their lives. They were all young adults over the age of 18.

“…I believed the “Beautiful Girlhood” spiel. I did it everything the “right way”. I stayed at home, I submitted to my father, I skipped college, I prepared to be my husband’s helpmeet, and I regret it. I had years of my life go by where I was little more than an indentured servant to my parents. My husband and I were forced into thousands of dollars of debt working for an abusive employer that we could have thumbed our nose at if I had been able to get a job. While I was without the commitments of marriage and children, I could have easily gained an education that could have served me and my husband well in early marriage. All those years living as a quiet submissive housekeeper, I could have been discovering interests, and developing as a person.”…”

It could have come out of a Bill Gothard based patriarchal family.

“… Gothad states that fathers must pick out a man for their daughter with a clear conscience, under authority, and who has financial freedom. The father gives the command, the mother works out the guidelines in the family. Father is spiritual leader. The woman is to work out how to properly go forward with the command of the father. Female chemistry is to be submissive to the will of father. Gothard rejects the concept of working mothers….”

It’s no wonder that Michael & Debi Pearl have modeled their perfect universe after Gothard’s perverted machine. The links between Gothard and Phillips cannot be denied. According to Ronald B. Allen, Gothard’s chain-of-command version of patriarchy is wrong. He calls it the basest form of male chauvinism he has ever seen. He says that Gothard is anti-woman.

“…Paramount among these is the terrible picture of the chain of command in the family with the husband as the hammer, the wife as the chisel and the children as the gems in the rough… The ghastly picture is that he beats on her and she chips on them. If ever there were a reason for a women’s movement in the evangelical church — this is it. This illustration is simply not reflective of biblical theology; it is a parody of patriarchalism….” 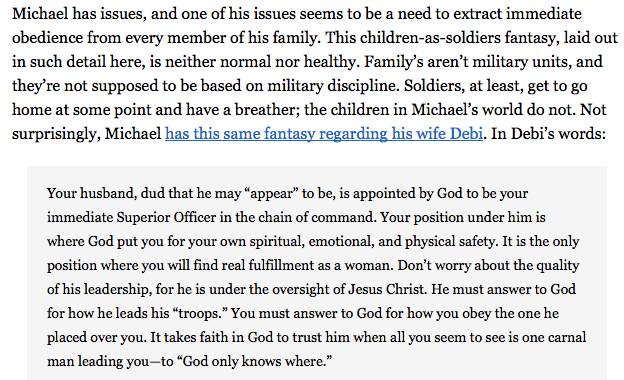 Absolute obedience is required by godly women and godly children. They are not to question the role of the godly patriarch, who is not allowed to question the godly minister. Nothing is to be questioned. You do not express any individualism. You do not think for yourself. You are required, at all times, to exhibit blind obedience to the little power-broker in the family. The godly father and husband then becomes a despot, at times an abusive despot, bowing to the direction of abusive and despotic requirements of their godly ministers and churches. It becomes idolatry, with the godly patriarch becoming more important than God. As one writer put it, it lowers God to man’s level, then makes man into God. 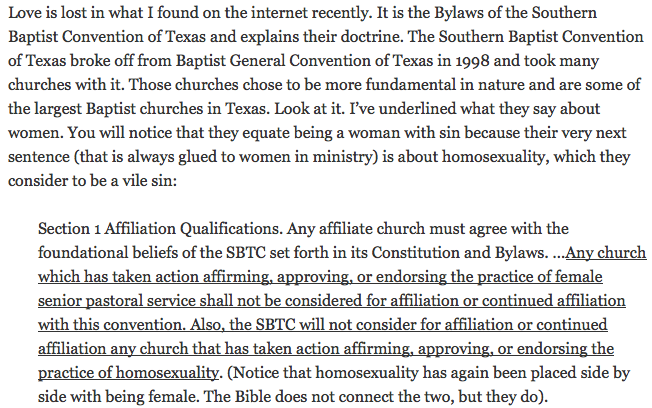 Feminists cannot possibly be Christians. They consider anyone who thinks that women should have the same religious, political, social, cultural, and financial rights as men to be feminists. From Samantha Field short history of the hatred of women by church leaders is daunting. It’s no wonder women are considered less than human.

“...There is also a long, horrific history of flagrant misogyny in the Church. There are archbishops removing a woman’s name from Scripture. Clement said “every woman should be filled with shame by the thought that she is a woman.” Tertullian described women as “being built over a sewer.” St. Augustine asserted that women were not created in the image of God and that we have “no use” (except, he grudgingly acknowledges, possibly pregnancy). Even Thomas Aquinas, who Walsh quoted here, said that women are “defective and misbegotten.” John Wesley told women to be “content with insignificance” and Martin Luther… well, he said a bunch of shit, because by even Christian-theologian-patriarch standards, Luther was a misogynistic son of a bitch.

This is why the church needs feminism– because the last two thousand years of church teachings have been riddled by misogyny and sexism. Many of St. Augustine’s writings form the basis for long-held Christian orthodoxy, and he declared that half of the people on this earth do not bear the imago dei. Martin Luther, whose teachings formed the basis for Protestantism and evangelicalism, said that it’s better for women to die in childbirth than to live a long life….”

In the year 1984, for the first time ever, thanks to Paul Pressler and Paige Patterson, at the SBC convention in Kansas City, a resolution was passed basically undermining the Holy Trinity. In order words, women could not be ministers. They would rather them not be deacons, either in the year 2000 they denied that God could even call women to the ministry.

“…For the first time in history, a Southern Baptist confession of faith denied God’s power to call a woman to pastoral ministry and revoked the freedom of autonomous Baptist churches to affirm whomever the Holy spirit led them to call as pastor. The 2000 BF&M decrees that “the office of pastor is limited to men” and ignores examples in both the Old and New Testament that God calls women to positions leading men in worship and service…”

Not only did they deny that God could speak to women and call them to the ministry, but they began undermining the very words Christ spoke. They also demanded the unconditional submission of wives to their husbands.  Unfortunately, we are dealing with is a cult, nothing more and nothing less.