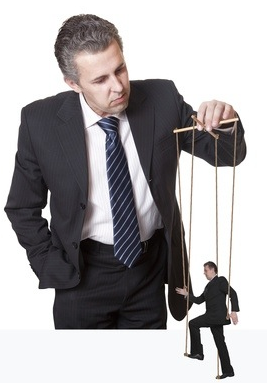 Strange how these things work.  When you Google “Church Discipline – ECUSA” there are several PDFs regarding discipline of the clergy.  Also, there is a site about how members can report abusive clergy and personnal.  That’s quite different from churches that are related to Reconstruction, Dominionism, ATI, and the now defunct Vision Forum.  Gothard’s Basic Life Principles are also recognized as a cult.

“...When a church releases a member in good standing,

WHY YOU CAN’T LET PEOPLE RESIGN INTO THIN AIR

If someone tries to resign mid-process in order to “escape discipline,” should the church just let them go? Of course not. That would defeat the whole point of church discipline. Instead, the church must retain the right to refuse someone’s resignation and send them out another way—through excommunication.

The upshot of all this is that a church should not accept a member’s resignation who is not doing what Christians do—in this case, regularly assemble with a church….”

In other words, when the member of a church is being ‘disciplined’ like some naughty child, they don’t have the right to tell the minister to (we don’t use a certain word, but you get the picture) ______ off.

“...Make sure that your congregation has a biblical understanding of church membership. People don’t understand discipline because they don’t understand membership. Membership is a congregational relationship. It is not created, sustained, or ended merely by the act of an individual; it is a church’s business to decide who its members are. And members cannot simply leave when they’re in unrepentant sin. (See Jonathan Leeman’s article, “The Preemptive Resignation—A Get Out of Jail Free Card?” for a fuller discussion of this.) So, look for opportunities in your sermons to teach on the distinction between the church and the world, and how that distinction is important for the nature and mission of the church. Remember that the members must understand membership and discipline because they’re the ones who must carry it out….”

You literally surrender part of your freedom to do what you want, when you join certain congregations.

“...Churches which have come under the influence of Rick Warren, Lyle Schaller, Bob Buford, or any of the other church growth business-model experts, have undergone profound changes. They will have adopted a Mission Statement, Core Values, and Vision, often through a “consensus” and “dialogue” technique. In order to become a member of these churches, parishioners are required to sign an oath to uphold their church’s covenant. The word “covenant,” which used to have biblical significance, is now applied liberally to this new church structure, apparently to give it credibility.

These churches post their covenants on the internet, presumably so that “seekers” will read about their church. Each church which has adopted this new model of membership is exactly like each other church. They are all cut from the same mold. “New Age” Unitarian churches have adopted the same plan as Presbyterian Reformed churches. Baptist, Assembly of God, Nazarene…. the list could go on and on. The new church structure is cross-denominational. Everybody’s plan looks exactly like everybody else’s plan, even though some churches have been led to believe that they had reached their own “original” or “grassroots” plan. This new plan came from on high, and it was carefully calculated to lure pastors and leaders into its new system of church governance.

This emergent church is hierarchical in nature. It is a top-down management structure, resembling the old shepherding models of the 1970s. There is an over-emphasis on “leaders” and “leadership” and “leadership potential.” In many of these churches, leaders are given complete authority over the lives of those in their flocks….”

As an aside, one of the worst offenders, the worst controller is Doug Phillips.  Now that he has fallen from grace, he resigned from his previous church, and is allegedly going to another, and did not bother following his controlling rules.  Doug Phillips, in his previous church setting was highly abusive and controlling.  “Jen” wrote about Phillips and what he did to she and her family. It was controlling, abusive, destructive, and bordering on the criminal.  The tale is long, convoluted, and riveting, well worth the time it takes to read.  A cautionary tale, it is the story of spiritual abuse, abuse of power, and the evil a so-called godly man can do. 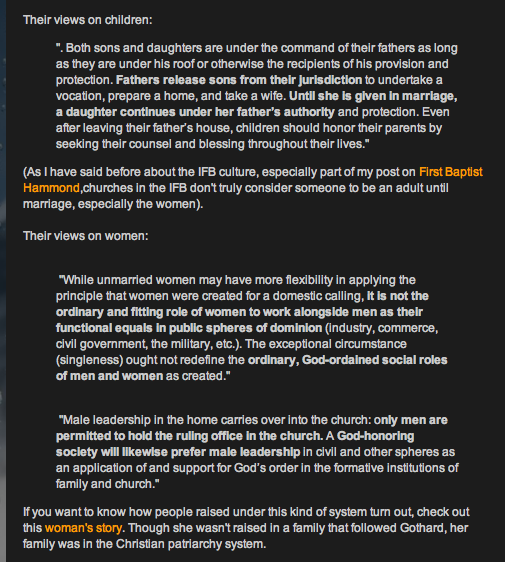 Women’s lives must be controlled, completely.  One godly minister  (D. Scott Meadows of Calvary Baptist Church  in New Hampshire) has gone so far as to issue a catechism for married women, including requiring the poor, brainwashed creatures to remain with abusive husbands.   The entire system as envisioned by John Piper and the Council for Godly Manhood and Womanhood leads to serious domestic abuse.

“...The second element that Piper lacks is knowledge of domestic abuse. He should know that abusive men will be drawn to churches where pastors will help them keep their wives “in line,” and because of this, he should be proactive in instructing women never to tolerate abuse. Instead, he gives advice that cannot even be applied by anyone in an abusive relationship. The examples of his inexperience are many in his video, but let’s look at one: If a woman spoke up to her abuser and used Piper’s words, “Honey, I want so much to follow you…” she might not even get through Piper’s whole speech before her punishment followed. Abusers don’t care if you use gentle words. And especially as faithful Piper followers, doesn’t he think these women and children have already tried being timidly vocal? Not only does Piper empower the abuser but he is asking the woman to disempower herself. He tells her that God wants her to be slapped around for his glory. He tells her that God, in his sovereignty, wants her to be abused….”

Bill Gothard is/was by far the worst.  In many ways he literally wrote the book on absolute control of lives, members, and taught godly men to absolutely control the lives of their families.  His control has spread even farther via Character Counts.

There is another very serious aspect of an all-controlling minister, church, or cult, is the fact that they think they are far superior to anyone else.  Their control can lead to serious problems within homes.  It can also destroy the mental health of its members.

“…Nearly a year ago, the Southern Baptist Theological Seminary offered a class on counseling taught by Drs. Stuart Scott and Heath Lambert. The implication we read is that the Bible has all of the answers to even life’s most challenging situations. The class was entitled, “Counseling the Hard Cases.” It seems there is an expectation that pastors will take care of all of the challenging cases themselves using solely the Bible. We see no mention of referring to outside help at all:…”

They completely disagree with psychology.

“…“Christian psychology” as the expression is used today is an oxymoron. The word psychology no longer speaks of studying the soul. Instead it describes a diverse menagerie of therapies and theories that are fundamentally humanistic. The presuppositions and most of the doctrine of psychology cannot be successfully integrated with Christian truth. In addition, the infusion of psychology into the teaching of the church has blurred the line between behavior modification and sanctification. The path to wholeness is the path of spiritual sanctification. It is foolish to exchange the Wonderful Counselor, the spring of living water, for the sensual wisdom of earth and the stagnant water of behaviorism. The Lord Jesus reacted in a perfect and holy way to every temptation, trial, and trauma in life — the most severe ones that any human life could ever suffer. It should be clear that perfect victory over all life’s troubles must be the result of being like Christ. No “soul worker” can lift another above the level of spiritual maturity he is on. So the supreme qualification for psychologists would be Christlikeness. If one is a truly Christian psychologist, he must do soul work in the realm of the deep things of the Word and the Spirit and not be following around in the shallows of behavior modification. Why should a believer choose to do behavior modification when he has the tools for spiritual transformation? This would be like a surgeon wreaking havoc with a butter knife instead of using a scalpel. The most skilled counselor is the one who most carefully, prayerfully, and faithfully applies the divine spiritual resources to the process of sanctification, shaping another into the image of Jesus Christ. – John MacArthur, THE PSYCHOLOGY EPIDEMIC AND ITS CURE…”

“...He actually believes that mental illnesses, including schizophrenia are caused by personal irresponsibility, and also guilt. This kind of ignorance unfortunately is rather common in fundamentalism. As I talk about in my guest post series on My Secret Atheist Blog, I was told by my family that my depression and OCD was merely “guilt”. I had a pastor who thought that anxiety was a “sin”, because it was a sign that someone didn’t trust god enough….”

Bill Gothard’s way is all about total and complete control – of all aspects of life, from birth to death, and everything in between.  A sexual pervert, he spent years harassing and sexually abusing young women who were assigned by their unwitting parents, to work for him.  Under his protection, young men and women were raped, and abused.  They were required to forgive their abuser.