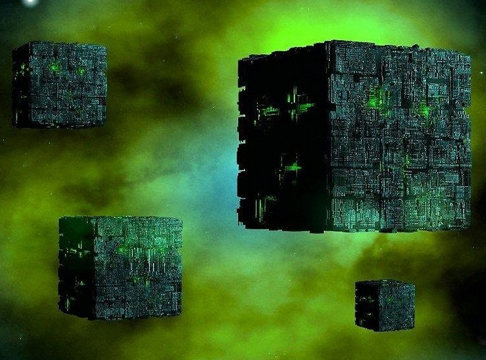 One of the very real problems endemic with the authoritarian right, tea parties, Christian conservatives, and Christian Reconstruction is  that they submit to authority.  While there are those who simply think it is a matter of basic personality, there is more at play here than just submission.  They have been trained, literally brainwashed into submitting to authority.  One of the hallmarks of Bill Gothard’s training, and in his character counts brainwashing cult is to submit to authority without question.  When one learns how to do this, then there is this massive tendency to forget who you are.  You become part of the collective, you have become assimilated.  You become the Borg.  You become nothing but a robot, doing the bidding of your godly leader.  There is no questioning of authority.  You do as you are told, or in some cases, you are literally cast from your community, excommunicated, your reputation threatened, and the lives of you and  your family turned into a living hell.

Comments on the Tea Party Movement

“…The foundations of Christian Reconstructionism were laid by the late Rousas J. Rushdoony in his prolific writing including his major tome, Institutes of Biblical Law and promoted through his Chalcedon Foundation. Reconstructionism teaches that all institutions of society and government must be reclaimed from “humanists” and reconstructed on the basis of biblical law. Reconstructionists claim that the unfettered free markets are biblically mandated. In other words, God is the invisible hand behind laissez-faire capitalism and government intervention is putting faith in man instead of God. Reconstructionist leaders have overlapped significantly with two other organizations that have sacralized radical free markets – Lew Rockwell’s Ludwig von Mises Institute, which promotes Austrian School economics, and the John Birch Society….”

Politically, they are creepy, kooky, and altogether stupid. Illinois Republican Susanne Ataneus, says that autism is God’s punishment for gays and abortion. Jim DeMint’s pal, Rick Joyner has called for a military take-over of the nation. Lawrence Lockman from Maine thinks that a man should be allowed to rape a woman if abortion is legal. In the state of Louisiana, the godly men there want the Bible to be the state’s official book. Paul Broun of Georgia says if he were elected to the Senate, if a bill meets Jude0-Christian principles, he will consider voting for it. But only godly bills need apply. Remember Sharon Angle? Michael Peroutka, is a member of the League of the South, and so forth and so on. Ted Yaho of Florida thinks that only property owners should be allowed to vote.

Godly men like Glenn Beck, David Barton and so forth and so on think that the Constitution must be re-written, in order to protect it from itself – and liberals.  Not only that, they are behind the anti-science movement in the country.

“…Everything they need to know about the universe and the origin of man is in the first two chapters of Genesis. They know the answer before any question is asked. DeMar’s spin is what he calls a clash of “worldviews.” According to DeMar and his speakers, God sanctions only their worldview. And that worldview is a hash of enforcing Old Testament Mosaic law (except when it comes to chowing down on pork barbecue), rewriting American history to endorse theocracy and explaining politics by the loopy theories of the John Birch Society. (Christian Reconstructionism evolved, so to speak, from a radical variation of Calvinism, AKA Puritanism, and the Bircher politics of such men as the late Marietta, Ga., congressman, Larry McDonald.) For most of the four-day conference, DeMar turned the Bible over to others to thump. North blamed the Rockefellers and the Trilateral Commission for the success of secularists. Titus told of Jesus making a personal appearance in the rafters of his Oregon home….”

There was a recent article about the 8 Habits of Highly Intolerant People. Nothing exemplifies the Christian Reconstruction movement, and planned take-over of the United States so well. Rigid is someone like Judge Roy Moore who now says that the Constitution applies only to Christians. Oh, and according to Louie Gohmert, the Constitution only protects Christians who cling to their guns. Darrell Trigg, who is allegedly running for POTUS on the Christian Party ticket, would make Christianity the state religion. What’s even worse, they want to ban nudity on the internet, keep gays off television, ban nudity from television, and would prevent the excessive use of foul language in the movies and television. He would also basically outlaw divorce.

They couldn’t stand allowing their pure godly boys to be a part of the Boy Scouts, so Trail Life was invented. Their salute is similar to one those classic goose-steppers liked to use back in the 1930s and 1940s. The godly men of the ATI, you know Bill Gothard and Dougie Phillips (both disgraced sex fiends) had very limiting plans for education.

“…The main observation to be made about this manifesto is that, according to Swanson, education should utilize the Bible as its primary textbook. Not science books, history books, or mathematics books, but the Bible. Education equals discipleship. This demonstrates that education should not only be primarily religious, but — it seems — exclusively so. Children are also to be trained in “humility” and “fear.” And making one’s children humble and fearful is a task God has assigned not to state schools or private schools (or even church-based private schools) but to parents….”

The godly man’s agenda, in 2009 (before the fall of the perverts) was quite simple:

Like the Borg, there is no tolerance for anyone who has a different opinion.  Anyone who disagrees will be destroyed, assimilated, or ridiculed into oblivion. They particularly have no tolerance for women who have an opinion.  Currently, women who differ from them, who express an opinion are ‘bitter’.   More disturbing is this ongoing trend to battle Child Protective Services.  Not only is it being seen in the religious world, but also in states where governors like Susana Martinez of New Mexico are nothing but puppets for ALEC.  There is a tradition of sexual harassment, pedophilia, physical and mental abuse of women, and abuse of children.

“…Following the lead of the Reformed theologians Herman Dooyeweerd and Cornelius Van Til,16 Rushdoony argued that all human knowledge is invalid if it is not rooted in the Bible. In his first book, By What Standard, published in 1958, Rushdoony…offered a radical critique of all human knowledge, arguing that it emerges from one’s theological presumptions (e.g. there is one God, many gods, or no god). For Christians, that means a three-in-one Christian God is the source of reliable human knowledge….

In Rushdoony’s thought, knowledge becomes a matter of disputed sovereignty. Every thought that does not begin with God and the Bible is rebellious: “Man seeks to think creatively rather than think God’s thoughts after Him. Evil is the result of man’s rebellion against God…. Man’s fall was his attempt to become the original interpreter rather than the re-interpreter, to be the ultimate instead of the proximate source of knowledge.” Accordingly, humanity’s pretence to independent knowledge becomes a matter of rebellion against God’s Kingdom because “any attempt to know and control the future outside of God is to set up another god in contempt of the LORD.” Rushdoony made thinking an explicitly religious activity, a shift in focus with political implications: thinking becomes a matter of kingship, power, rebellion, and, in the final analysis, warfare. Either human thought recognizes God’s sovereignty, or it doesn’t. There is no middle ground, no compromise. It is a war between those who, like Rushdoony, think God’s thoughts after Him and those who do not.

If thinking and education are a matter of God’s disputed sovereignty, then Rushdoony believed that Christians who turned their children over to public schools were in open rebellion against God.Rushdoony summarized, is to exercise dominion, “subduing the earth agriculturally, scientifically, culturally, artistically, in every way asserting the crown rights of King Jesus in every realm of life.”…”

Any religion or cult which allows this is not Christian.  They don’t like education – public education.  They are against secular humanism.  They want children to be taught only from the Bible.  That’s all they need.  They are promoting abject ignorance.  There is a very good reason for this.  An ignorant population is easily controlled.