Any political discussion about Christian Reconstruction must be followed, logically, by the unasked question.  What role do David & Charles Koch play in all of this.  First, we know very little about their religious practices.  There are speculations, but that gets us nowhere.  If nothing can be found about their actual ‘faith’, then let’s just assume the only thing they worship is money and power.

Charles Koch was also a big-time John Bircher, to the point where he helped fund some of the earliest Holocaust Denial enterprises.  Rushdoony was anti-Semetic, a racial bigot, and refused to even acknowledge that the Holocaust occurred.

“...The reactionary ideas learned from his father and stoked by his ideological ally in Wichita, Bob Love of the Love Box Company, were not simply passing fancies of the young scion of an oil fortune. The tools of the trade he absorbed in his late twenties and early thirties appear to continue to animate some of his actions decades later, as with his 2014 op-ed in the Wall Street Journal claiming those who criticize him are “collectivists.” The echoes of his past role reverberate along with the millions he and his brother David Koch have spent fueling a John Birch Society-like “Tea Party” peopled with right-wingers like Birchers of decades past who contend against all reasoning that the president is a communist. David Koch himself has claimed President Obama is a scary “socialist.” These roots run deep in the Kochs…”

What we’re dealing with is more like a six degree of separation, with only one or two degrees of separation.  It is difficult to place Rushdoony in the Koch world, yet they believed the same thing and had the same associates.  The difference is that Rushdoony had no money.

“…In leaving the John Birch Society, Charles Koch had become enamored with a more anarchical expression of his attachment to unregulated capitalism that at its root opposes government action other than that which is necessary to protect property and freedom of contract, two theoretical “ideals” at odds with the very kind of anti-discrimination laws, labor laws, and social programs that the John Birch Society attacked. Since the 1960s, Charles Koch and his brother David have spent untold millions to move these related theories into the mainstream. And, like the John Birch Society spearheaded in recruiting their father, they too have done so by recruiting other industrialists, as with their billionaire “Freedom Partners” to join them in funding efforts to dramatically change this country by trying to takeover Congress and the states and rewrite the laws to suit their own interests….”

A few years ago, at a meeting, New Jersey Governor, Chris Christie said that the they had almost been anointed by God, to rule this nation.

“…Christie told the billionaires that The Lord Himself had anointed them to rule America – if only the moochers would stop torturing them with stupid environmental rules and taxes. “All they do is layer regulation and taxes and burdens on all those people who just wanted opportunities to use their God-given gifts and their ambition and their vision to try to improve their lives and through that, improve the lives of other people.”

For the record, the Kochs’ billions were not God-given, but Dad-given. And Daddy Koch got his loot from deals made with Joe Stalin. (No kidding.) That night, the billionaires whom Christie cast as the victims of government cruelty ponied up $70 million for the Kochs’ political campaign war chest. And, after Christie spoke, Charles Koch said, acknowledging the million-dollar checks from Foster Friess and others: “We will invest this money wisely and get the best possible payoff for you …”…” 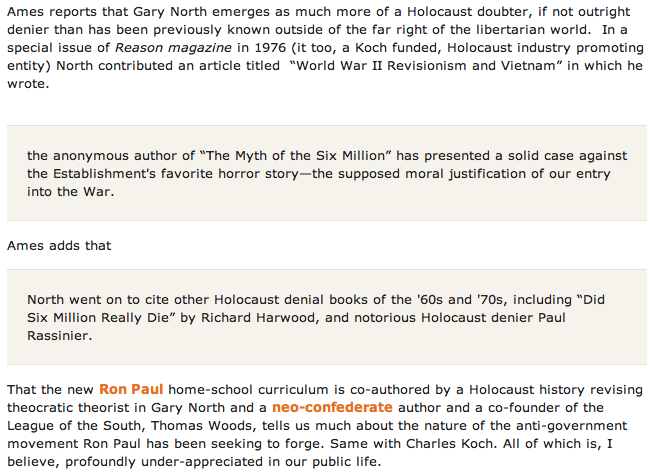 One of the more fascinating tidbits of information to surface is the fact, that, according to Jim Naughton of the Episcopal Diocese of Washington, DC, the trail goes back to the Kochs.  It also goes back to the IRD.

“…Well, basically in the Episcopal Church and in other mainline denominations we’re dealing with an attack funded by the same donors who have funded the establishment of The Heritage Foundation, the American Enterprise Institute, who fund the American Spectator magazine-the whole sort of intellectual infrastructure of the far right wing in this country has decided to target our mainline churches because it doesn’t like where they stand on social issues, on economic issues and to some extent on theological issues.

So what I did was to look at the documents that these groups have to file with the Internal Revenue Service just to trace the money stream. You can tell a lot about an organization by looking at who funds it. Who stands to gain from this organization’s success? And what you find is that you’re looking at kind of a Who’s Who of the far Right Wing in the United States….” 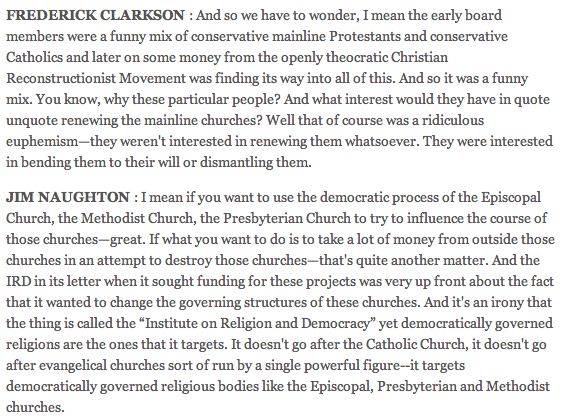 Apparently one of the problems is the fact that, via the IRD, the American Enterprise Institute, and other Koch funded organizations, the attack on funding for social services, against the churches who believe in helping others, was launched.  We evil Episcopalians have a big fat red target on our back.

“…“We believe the poor of this generation and generations to come are best served by policies that promote economic freedom and growth, that encourage productivity and creativity in every able person, and that wisely steward our common resources for generations to come,” we said. “All Americans — especially the poor — are best served by sustainable economic policies for a free and flourishing society. When creativity and entrepreneurship are rewarded, the yield is an increase of productivity and generosity.”

Also we warned that Matthew 25 and other admirable commands to Christian charity cannot be effectively implemented through federally orchestrated wealth redistribution. We affirmed the need for an underlying social safety net but suggested what is really needed is robust economic growth, job production and accompanying debt reduction….”

In many ways it is about saving money, libertarian style, putting the perverted practices of Ayn Rand into ‘Christian’ theory.  Starve the poor.  Make ’em work for what they don’t deserve. It is sad, tragic.  Today, what matters, even in the so-called Christian community is money.  It reflects the libertarian world of Ayn Rand, Ron Paul, Gary North, and R. J. Rushdoony.

There’s nothing Christian about it.