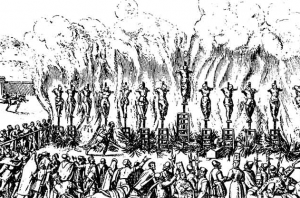 “…We must use the doctrine of religious liberty…until we train up a generation of people who know that there is no religious neutrality, no neutral law, no neutral education, and no neutral civil government. Then they will get busy constructing a Bible-based social, political, and religious order which finally denies the religious liberty of the enemies of God.” …”  Gary North

Part of dominionism is about dominating women. When you add ‘patriarchy’ into the mix, there is a mess. It is also about universal suffrage and limiting just who can vote.  Undesirables – read into this people of color, non-Christians, those who are not members of the correct church, or refuse to sign loyalty oaths (contracts) with their various churches, will be left out of the citizenship process.  So will women, unless married, and members of the correct church.

“…Reconstruction’s major impact has been through helping to found and guide cross-denominational and secular political organ-izations. The Council for National Policy—a group that holds meetings for right-wing leaders, once dubbed “the most powerful conservative group you’ve never heard of”—was founded in 1981 as a project of top John Birch Society figures (see “The Fountainhead”). Its members included Rushdoony, Gary North, Tim LaHaye, former Reagan aide Gary Bauer, and activist Paul Weyrich, who famously aimed to “overturn the present power structure of this country.”…”

Another serious difficulty is the system envisioned by godly men, godly neo-Puritan men is completely contrary to freedom. Like Gary North, and R. J. Rushdoony, there is a total and complete rejection of the democratic process. In the mind of the ‘true believer’ democracy is heresy.  In the mind of R. J. Rushdoony, democracy was heresy. The only acceptable way to govern was via patriarchy, as a godly neo-Puritan wrote, recently.

“…While one cannot really yet call it a “movement,” the term “patriarchy” has made a return describing an attempt to develop a counter-cultural model of the Christian family and by extension, a just Christian social order….This idea of “democracy” has even infiltrated the Christian home with a widespread elimination of distinct roles between men and women and a subsequent devaluation of the authority of the parents. However, it might be interesting for the average Christians to learn that the men who gave us our “democratic” institutions, ushering in the most productive, freest and socially responsible cultures in the world’s history ALL rejected “democracy.”

The Reformers saw “Democracy” as an ancient Greek heresy contrary to Biblical social and political theory. Instead, the greatest theologians of the Reformation affirmed the doctrine of “federalism” or “representation” based upon the model found in Genesis. In this view, one man stands for the group. Theologically it referred to Adam representing the entire human race (yet unborn) and therefore when he sinned, we all sinned in him. The corollary to this was Jesus being the Second Adam, standing in for His Elect; if we all died in Adam; we are all saved in Christ. Through federal representation, His death could atone for all His people’s sins (Rms 5:12-19).…”

Because of the sacredness of the godly family and the godly patriarch, when women are allowed to vote, it upsets the balance of the family. Part of the new dominion will be limiting just who can vote. According to Rushdoony, only Christian women, who are married go godly Christian men, and will vote as they are told, will be allowed to vote – if they vote, at all. There are those who think that allowing women to vote undermines the godly family. The following neo-Puritian paper was written by Dr. Brian Abshire, a godly patriarch who doesn’t believe that women should be allowed to vote.

“…However, by the end of the 19th century, American Christians had largely stopped thinking in theological terms. Instead, an emotive, subjective religious “experience” (called Pietism”) emphasizing individual conversion replaced the comprehensive Christian worldview of the Reformation. As Christians failed to think Biblically about all of life, they were unable to withstand either the new philosophies gaining ground in the universities or deal effectively with the changing social conditions of the Industrial Revolution….

In regards to a woman’s right to vote; if husband and wife are truly “one flesh” and the husband is doing his duty to represent the family to the wider community, then what PRACTICAL benefit does allowing women to vote provide? If husband and wife agree on an issue, then one has simply doubled the number of votes; but the result is the same. Women voting only makes a difference when the husband and wife disagree; a wife, who does not trust the judgment of her husband, can nullify his vote. Thus, the immediate consequence is to enshrine the will of the individual OVER the good of the family thus creating divisions WITHIN the family….”

Unfortunately, crack-pots like Abshire aren’t the only ones who believe that voting should be limited. Rick Santorum, stated the same thing recently. David Barton, that godly but fake historian says that women were not given the right to vote in the Constitution because the Constitution was designed to protect the rights of the godly family.

“...The family was the first and fundamental unit of all government. Actually, you have individual self government first, then you have family government second, you have civil government third, and have church government fourth. Those are the four levels of government in the order they are given in the Bible.

So family government precedes civil government and you watch that as colonists came to America, they voted by families. You look at the Pilgrims, when they finally moved away from socialism and moved toward the free enterprise system, they called the families together and gave families plots of land. Private property given to the families. And so that’s the way things work.

And you have to remember back then, husband and wife, I mean the two were considered one. That is the biblical precept. That is the way they looked at them in the civil community. That is a family that is voting and so the head of the family is traditionally considered to be the husband and even biblically still continues to be so …

Barton is joined by the Reverend Jesse Lee Peterson, who says that women should not be allowed to vote. When you have an Associate Justice of the Supreme Court saying that the Constitution does not prevent discrimination against women, when are they going to start saying the Constitution does not allow women to vote? They also think it might be necessary to resort to violence to restore the nation to its so-called godly Christian roots. There are some calling for a civil war of secession, in order to force formerly godly men and women to be under the control of godly leaders, appointed and anointed by God.

“…This kind of thinking is not new within the farther reaches of the religious and political Right. The Christian Right theorist and prolific author Gary North, for example, wrote about the long-term revolutionary implications of what he and others were doing. North objected to the 1994 assassination of a Florida abortion provider and his escort by a fellow Christian Reconstructionist, Paul Hill, who had also authored a manifesto in which he called for Christian militias to rise up against the federal government.36 North argued that the assassination was premature and that the foundation for theocratic Christian revolution had not been properly laid. Nevertheless, North felt that something serious was already underway. “For the first time in over 300 years,” he wrote in 1987, “a growing number of Christians are starting to view themselves as an army on the move. This army will grow.” He concluded: “We are self-consciously firing the first shot.”…”

It all makes perfect sense. You cannot separate John Calvin and the entire movement.  The patriarch, the godly man, the godly man who is into Christian Reconstruction wants to create a nation the way John Calvin did. You cannot separate the entire movement, their desire to claim the United States for their version of who they think Christ is, and what is going on, politically, via the far right.

Let’s be honest, very few people who are even indoctrinated with this ungodly movement even realize what is going on here.  They would be shocked, and dismayed if they realized they were being used, had been brainwashed to be part of what is a long-planned theocratic take-over of this nation.  It goes against who and what they are and literally what they believe.

The decent, normal, conservative, patriotic, Christian American is being used and manipulated.  In many ways they have been brainwashed.  Some have, others have not.  They are simply part of a truly deranged plan, worthy of some psychotic villain in a James Bond tale. It is world domination – for God.  The entire idea is insane, ludicrous, and so crazy, no one would believe it.  But, it is happening.   It’s the old frog tale.  If you put a frog in hot water, it will jump out, and save itself.  If you put one in cold water, and slowly turn up the heat, the poor frog doesn’t even know it’s being boiled to death.  That’s how they’re doing it, slowly boiling the frog to death.

Let’s face it, what’s going on within the Southern Baptist Convention (as an example) is shocking.  If you look it as a member of the SBC, it makes sense.  If you look at it the way I am, as a former Baptist, who left the church back in the late 1970s, it’s an entirely different church, a completely different religion.  How many other churches out there are like this?

The real problem, good, patriotic, Christians, decent men and women vote. They vote the cause.  They vote for good, decent, men and women who claim to reflect their values.

Houston, we have a problem.