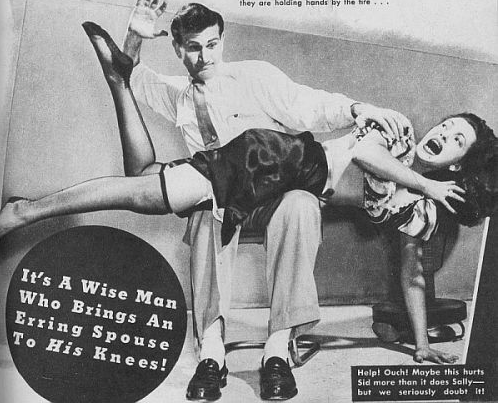 There is a thread of violence that winds its way through the new patriarchy movement.  It is based on some fairly kinky  practices.  When I went to Google images for this series, I made the mistake of using ‘submissive’ ‘wives’ ‘Christian’ ‘patriarchy’.  Some of the images were terribly graphic.  Some were very disturbing.  Many were basically naked women involved in S&M practices.

That’s the problem here.  There is a sadomasochistic problem in the movement.  These godly men have sex on the brain, and it appears to be kinky sex, at that.  I’m a live and let live kind of person.  If these godly individuals want to pretend they are June and Ward, then act more like something out of a magazine they can’t even hide under the counter at a 7-11, then that’s their problem.  They can do what they want.  But, why promote their godly life-style on everyone else, insisting that those of us who are normal, are truly the ungodly ones?

“...Gothard even advises a wife whose husband chastises her to say, “God, thank you for this beating.” And Gothard adds to Christ’s words from the cross: “Father, forgive them, for they know not what they do. But you know what you are doing through them to build character in me.”…” 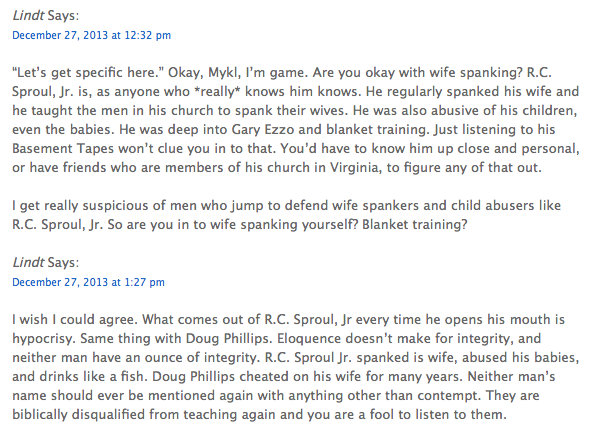 For some strange reason ‘beating’ is a common thread in this wild and wacky world of Christian Reconstruction. Michael Pearl recommends serious physical abuse and beatings to teach children how to behave, to break them. His wife, Debi goes along with it. Come to find out, the Christian Patriarchy is big into wife spanking. Even the venerable R. C. Sproul, Jr. is.

“...One of the difficulties of reporting something like this is that I wanted proof that wife spanking is taught before reporting on it. Everyone I’ve asked has said that we’re not going to find much evidence of wife spanking in print. The leaders who promote it are not dummies – they know there would be outrage if this kind of printed material got in the “wrong” hands.

I asked my sources when this abuse is taught to men. I was told that wife spanking is sometimes taught at mens meetings, heads-of-households meetings, in one-on-one counseling meetings, or sometimes in marital counseling by church leaders or pastors.

Over at Jen’s Gems blog, several commenters have mentioned some of the key names I’ve been hearing/reading. While some will want to focus on the named man in the comments, it is important to look at the entire Christian Patriarchy system that is at work creating these abuses. Doug Phillips was not alone in his method of spiritual tyranny and preventing “godly men” from disclosing the truths they knew. This is going on elsewhere.

We must understand that Christian Patriarchy can easily set up a man to have a free license to abuse his wife. I am very concerned about pastors who teach men that they need to get their wives under control. I overheard my own former pastor say this. How he would propose doing this, I do not know, but the idea of a man using his authority to control could easily be taken to the extreme of wife spanking….”

Rebecca Groothuis has penned an excellent, and very quick read, describing what complementarian is. She noted that, before the word was misappropriated by the religious right, it was used to describe equality between the genders. Mark Driscoll doesn’t seem to understand all of this. Years ago, as William Wallace II, he wrote:

“…Therefore, it is imperative that a young woman have either her father or another man occupy that role of headship in her life to aid in the selection of her husband. If her father is absent or unsuited, it would be best for young women to invite an older man (i.e. a church elder, respectful man in their church, a believing close male relative etc.) to serve in that regard out of loving concern for her. Paul illustrated this principle with the topic of headcoverings in Corinthians wherein he essentially stated that women should always be under submission (first of their father and then of their husband) and demonstrate their submission in the culturally appropriate sign of such a submissive spirit with the wearing of a head covering. This transference of headship is symbolized in the Christian tradition of a father walking a woman down the aisle and then literally giving her away and transferring his headship to her husband….” 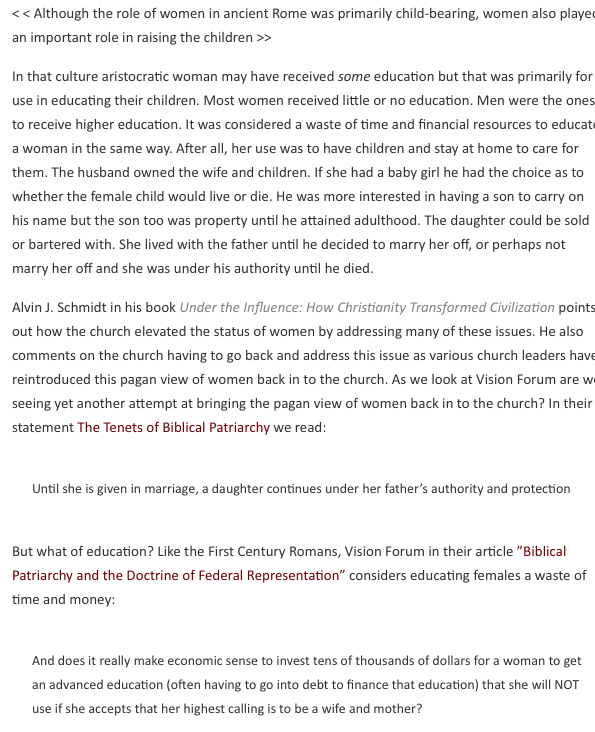 More of Driscoll’s hatred of women:

“…Your verses are very weak in arguing for an elimination of gender distinction. A husband and wife team worked together helping Paul plant churches and sometimes the wife is mentioned first, and sometimes the husband is mentioned first. That’s a long way from her being an elder ruling over men in a local church – something we are never told about her. Phoebe was likely a deacon, which is different than a ruling and teaching elder. And, at the end of Romans the person mentioned is possibly a man and possibly a woman, the gender is unclear and the name in that day could go either way (i.e. like Pat in our day), and we are told that this person is “outstanding among the apostles” which does not show that they were an apostle, but instead that their work with (or among the apostles) was outstanding. You cannot give me any book of the Bible written by a woman, any woman disciple, or any woman pastor in the New Testament. Paul tells Titus to appoint elders in every town (Titus 1:5) and then explains that one of the requirements is that they be men. If you are arguing this is all cultural why would it begin in Genesis with creation and continue with Paul saying the same thing to the church at Colosse, Corinth, Ephesus, Pontus, Galatia, Cappadocia, Asia, Bithynia, Macedonia and Crete – that men and women are different and that men should rule in authority over homes and churches? In light of the multiple cities and cultures and dates of writing it seems pretty clear it is a cross-cultural principle. Lastly, the cultural argument was addressed by Paul and he claims that men’s and women’s roles are principally chosen at creation, and then practically lived out in culture (I Corinthians 11:9). Are you really suggesting that somehow Jesus and Paul were pussified men afraid to confront culture so they caved in and took the easy route by choosing men thereby sinning against equally qualified women?

Lastly, you are exactly what is wrong with men. Crappy arguments, paper thin Scriptural support, and a dogmatic claim that you know what the hell you are talking about. My guess you are not an elder, and likely not married.

Is your pastor a woman? Are you gay? Are you married? Are you an elder? Are you sure you know what the hell you’re talking about? Do you seriously think you have a case? Do you seriously think your arguments are worthwhile? Is that the best you’ve got? Sad, I’ve got a long list of women who would theologically take you to the woodshed and prove they shouldn’t be pastors, heads of homes, or ruling over men and they would curse you out for telling them to be men and telling their husbands to be women. Some could probably kick your ass to boot….”

Driscoll is in trouble, these days.  There appears to be a common thread of sexual abuse that is woven throughout the far right Christian Reconstruction movement.  It manifests itself in Driscoll’s truly sexually disgusting sermons that are more the reading of pornography than a so-called sermon.  It is found in the truly strange world of wife spanking that the venerable R. C. Sproul, Jr. was allegedly involved.  It can be seen in the abusive practices suggested by Michael and Debi Pearl.  Let’s face it, Bill Gothard is a sexual pervert.  Doug Phillips went down for adultery. C. J. Mahoney is disgraced because he refused to dismiss a now convicted pedophile from his SGM cult. 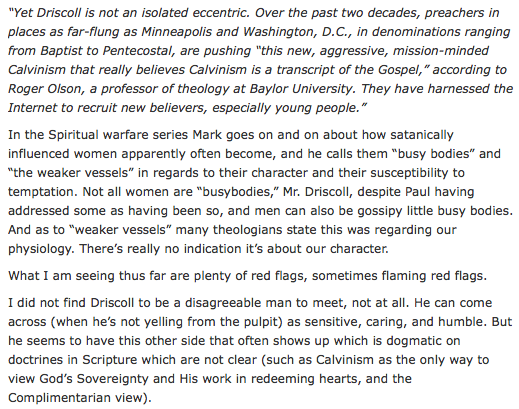 Something is very wrong here.