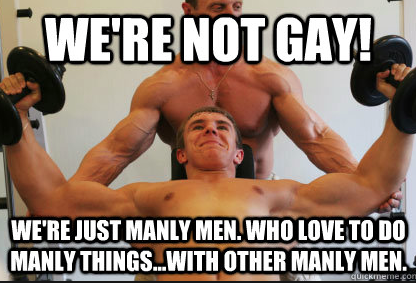 PREVIOUSLY:  The Victorian version of the concept had NOTHING to do with the hatred of gays, subjugation of women. It was the exact opposite of the version being promoted today, where sniveling, testosterone impaired little men are so terrified of gays that the only possible explanation is that they are closeted, themselves.

What makes a man feel the need to discuss his manhood, to defend it, and to wax poetic about the cult of masculinity?  Why do men think they need to become more masculine?  Are they afraid they are not real men?  Does their godly hatred of gay men hide the fact that they are terrified that they are secretly attracted to men, hiding so far back in the closet they will never find their way out of it?

“…In the 21st century, the push for a more masculine Christianity has been made by New Calvinist pastors such as John Piper, who claims, “God revealed Himself in the Bible pervasively as king not queen; father not mother. Second person of the Trinity is revealed as the eternal Son not daughter; the Father and the Son create man and woman in His image and give them the name man, the name of the male.” Because of this, Piper contends “that God has given Christianity a masculine feel.”…”

“…”He does not intend for women to languish or be frustrated or in any way suffer or fall short of full and lasting joy in this masculine Christianity,” he explained. “From which I infer that the fullest flourishing of women and men takes place in churches and families that have this masculine feel.”

“That is liable to serious misunderstanding and serious abuse since there are views of masculinity which would make such a perspective repulsive. So, there is more that needs to be said,” the influential pastor continued.

“When I say masculine Christianity or masculine ministry or Christianity with a masculine feel, here’s what I mean: Theology and church and mission are marked by an overarching godly male leadership in the spirit of Christ with an ethos of tender-hearted strength, contrite courage, risk-taking decisiveness, and readiness to sacrifice for the sake of leading and protecting and providing for the community. All of which is possible only through the death and resurrection of Jesus.”…”

Thanks to the philosophy of godly men like John Piper, Mark Driscoll, Al Mohler, Kevin Swanson, Bill Gothard, and so forth and so on, godly young men today are terrified of women. They are terrified of women to the point where women are no longer to be treated as equals. They have been taught that their ungodly masculine urges, normal masculine urges are not normal, rather they are impure and basically evil in nature. These urges are caused, not by their normal masculine nature, chemistry, and biology, but by the repulsive manipulations of women who are leading them astray by allowing the barest hint of cleavage, a short skirt, a belly-button, and anything that might cause a godly man’s thoughts to stray to things they are incapable of understanding.

“…The thing is, I don’t have or want actual balls, but I’ll be damned if someone gets something I don’t because they do. I certainly have figurative balls, or cajones, or “a pair” (of balls). I’m brave. I’m assertive. I’m sick of people marrying these traits to masculinity. Whatever happened to the whole “I am woman, hear me roar!” thing? Women can be assertive, aggressive, brave and ballsy without being mannish or unwomanly. Being brave doesn’t make me a bitch; being a bitch makes me a bitch. I am still feminine when I am assertive. I am still a woman when I’m knocking a man down a few notches. Also, just because I’m destroying some dude in a debate, argument, drinking contest, arm wrestling match, wood chopping contest, four wheeler race or whatever I’m doing that day, it doesn’t mean I’m emasculating him. I’m just beating him. I’m winning. He’s losing. He’s still a boy and I’m still a girl….”

I’m still a woman.  I’m not trying to go off and discover my femininity, or my feminism.  I don’t need to.  Just because I’m not married, and have no children is no indication I’m not feminine, and don’t like men.  It’s an indication that I’m not going to put up with some girly-man’s demands to be the lord and master, and bow down and worship him.  It doesn’t work that way, not in reality.  I’m not trying to strip men of their masculinity, assert my feminist tendencies, or demand they scrape and bow to me because I’m a female.  I want a fair break in life.  I’m not trying to tempt them, rob them of their hard-earned purity. I’m not trying to emasculate them.  I just want basic equality. I want the Christian experience Christ showed to Mary, Martha, and the women who followed him.

They are afraid of all parts of a women, from her head to her toes. Anything can cause these godly men to have urges they consider ungodly. Two godly young men who attend Patrick Henry College, penned a series of letters to the ungodly women who attend the college. They have been taught that they can only control those natural male urges, those urges they have been taught are evil, by controlling women, their appearance, and what women wear. If not, they are not responsible for the consequences.

“…We rejoice to say that the women at Patrick Henry are, overall, some of the most conscientiously-dressed ladies it has ever been our joy to meet. And we have seen a number of our sisters here grow in this area over the past few years. However, we must in honesty say that there are many who could do better. We do not believe that there is a general wicked desire to “cause a brother to stumble”—quite the contrary. You all show great love and care for us. But many Christian women, probably a large majority, simply do not understand the depth and extent of the foul perversity of the male mind. (If you’re a man and some part of this doesn’t apply to you personally, just assume we’re only talking about ourselves at that point.)

We have a duty as brothers in Christ to guard the purity and holiness of our sisters, which means restraining how bluntly we speak. On the other hand, part of that duty is to help you understand the problem. To avoid causing offense for our own sake, all the most explicit bits are taken directly from Scripture. Anyone who finds God’s authoritative written revelation inappropriate is advised to skip this section.

You’ve heard this before, but we’ll say it again: men are visually wired. A man notices a pretty female walking by. His eyes lock on, his brain clicks in (we mostly tend toward one-track minds). He is attracted to her. Attraction, when left undirected, leads naturally to desire….”

Are these godly men so afraid of women they must force us into submission, or is it something else?  Let’s try another approach.  They aren’t afraid of women, they’ve been taught to hate women.  You only treat those you hate this way. Their approach to women is not normal, not rational, and not part of reality.  They cannot cope with reality.

They’ve been carefully taught to hate women.  Women are the enemy.  Women have been put in such a position, and these men are so afraid of their normal sexual urges, that they can only hate us for causing them to sin.  Even more disturbingly, these two godly twits wrote:

“…For those who are sincere, but perhaps were not trained quite so well or do not altogether understand quite yet—we pray that He will continue to work in you, so that you can better carry out the good desires of your heart. We deeply appreciate you too. Do not become complacent; continue to grow in purity and holiness. There are women who not only avoid causing temptation, but actually provide positive assistance, making it easy for men not to lust after them—and yet modestly display the beauty God has given them. More than noncombatants, they are valuable allies. Seek out such ladies and ask them for advice in all humility.

But let us also offer a warning. Although women almost never completely realize the extent to which (or the ways in which) they can affect men, most women are aware on some level that certain things attract men. And women like to feel attractive. This is natural; we have already said that you are created to be beautiful. But we have also said that the purpose of attraction is enjoyment.

Please be careful of this desire to attract. It is a good thing; but it is easy to misuse. Many females drive us to ask some pretty unpleasant questions.

If a woman does not want to be the subject of wicked imagining, why does she provide so much scope for the imagination? If she does not intend to be suggestive, why does she tantalize with hints, peeks, glimpses, suggestions?…”

No wonder these godly young men feel the way they did. Just look at what Mark Driscoll once wrote about what masculine men were all about. His version of a manly man is: 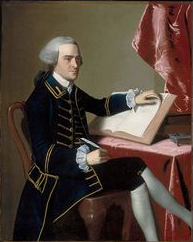 P. S.  If  you don’t recognize the portrait on the right, well, that’s a manly man.  Only today, he wouldn’t be recognized as a manly man due to the powdered wig, lace cuffs, affectation of snuff, red shoes, and white stockings.   This manly man, who isn’t a bit macho, doesn’t look like an over-stuffed muscle bound brute, who waxes poetic about being a manly man had the guts to sign his name on a little piece of treason. He wanted his name large enough so that Fat George would not need his spectacles  to read it.