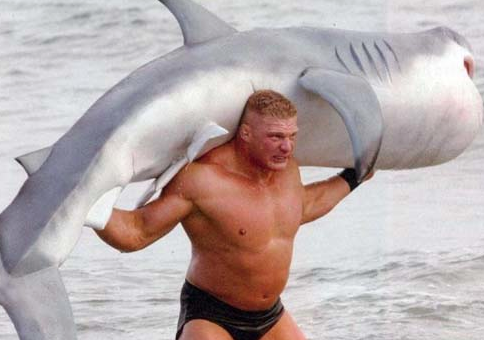 Shark Week begins today.  As a homage to manly men everywhere, or those who are suffering from so sort of inferiority complex, let’s start with a tale of men, manly men fighting the odds, men against the Great White.  You didn’t hear these manly men opining how manly they were, or went to meetings to hear godly manly men describe how godly manly men were to act.

Yes, I’m ranting and raving a little, but, when dealing with the likes of the godly manly men who are desperately looking for their lost manhood, it gets to be just a little silly.

Driscoll’s version of God is a warrior who kills people, creates warriors and has enemies He kills. He needs bad guy warriors who can kill people to avenge Him, because He has enemies. Yes, Driscoll said this in a sermon Obviously, he doesn’t pay much attention about beating swords into plow-sheers and turning the other cheek. That’s a sissy version of God and a sissy Christ. The man had the nerve to say that 1 Timothy, 2 Timothy, Proverbs, Ecclesiastes, and Song of Solomon were written for the benefit of and training of men. No girls allowed?

“...I didn’t experience violent misogyny as a child – sexism, yes, but my early years were free of direct experience of woman-hatred against me or my loved ones, except as an abstract concept, the fear that gets taught to all girl-children as soon as they can stand unaided: don’t walk down that street, don’t wear that skirt, don’t speak too loud or upset the men. You’ll get hurt. You could get killed. For today’s girl-children, that has been expanded to include: don’t go on the internet. Bad men are there, men who will hurt you.

Many of us choose to ignore those warnings. We choose to act instead like we are real human beings with a right to take up space, like almost all women and girls who have managed to achieve anything throughout history, because that’s what those warnings are for, what the violence behind them is for – to scare us into submission. We make that choice again every day, and somehow it does not get easier – because the older and stronger we get, the bigger and stronger the new feminist movement gets in all its glorious variety, the more vicious and committed the backlash becomes. The backlash is real. There is ideology behind it. It hurts. Sometimes, it kills….”

A man can’t be a good husband if he isn’t a Christian?

“...The first thing you gotta realize is that before a man can ever love his wife, he has to be a Christian. First and paramount, a man cannot be a good husband unless he’s a good Christian because Scripture says to love your wife as Christ loved the church, Ephesians 5. You cannot even begin to fathom that apart from being a good Christian, that men do not have in and of themselves the ability to love their wives….”

Driscoll equates women’s sin, a wife’s sin as destroying a man. He says a common sin for a wife is:

“…In addition, some women – common sins for wives are destruction. Proverbs 14:1, “The wise woman builds her house, but with her own hands the foolish one tears it down.” Some women just love to destroy things. Some women literally break things. The dish-chucking wife, the thing-breaking wife. They like to break things. Some women will work hard to build a marriage, and then they’ll just destroy it. They love to just cause chaos and havoc, and like their enemy, they’re just about destroying things and tearing them down….”

I don’t remember reading where the 10 Big Ones lists Thou Shalt Not Throw Crockery as a sin!

“...Lord God, I pray for the ladies as well, that through their frequent sins of quarreling and tearing down and being unfaithful or just being a shameful embarrassment, that they would not be a decay in the bones of their husband, but instead they would be a crown upon his head….”

Not to worry, Driscoll also has weird opinions what a man’s sin is. When a woman nags him, makes him miserable, he hangs out with his buddies, to get away from her, starts playing golf, then it leads to sin because he gets involved in pornography! Oh, and a man sins against his wife by not being home for her.

“...I’ll tell you this, gentlemen: Women are built for love. They just are. If you love a woman, she’ll respond. If you’re ruthless and cruel, she doesn’t respond. Some men respond well to just strength and hardness; women don’t. What that means is, what motivates a man does not motivate a woman. If the men are motivated by some things, the women are not motivated in those same ways. That’s why when I talk to the men, I will speak differently to the men than I do to the women. Men want respect, according to Ephesians 5, and women, according to Ephesians 5, want to be loved….”

“…Being here made me feel old. Most of the people I saw were in their 20′s or 30′s, about 60% male, and many of them rocking side burns, horn-rimmed glasses and flannel shirts. I was about to hunker down amongst the largest group of hipsters I had ever seen. For the record, I don’t have a problem with hipsters, and even though I throw that term out, I have to confess that I’m still confused as to exactly what it means. But that doesn’t stop me from using it….”

In many ways, this brings us back to Boykin’s absurd version of the manly Christ. According to Boykin, when Christ returns, he’ll be carrying an AR-15 assault rifle. Never mind that Christ taught us that we need to turn the other cheek.    A man who must embrace his godly manhood is not much of a man.  A godly man who must turn Jesus of Nazareth, the ultimate pacifist into a warrior, needs to truly get to know the Prince of Peace.

“...The Lord is a warrior and in Revelation 19 is says when he comes back, he’s coming back as what? A warrior. A might warrior leading a mighty army, riding a white horse with a blood-stained white robe … I believe that blood on that robe is the blood of his enemies ’cause he’s coming back as a warrior carrying a sword.

And I believe now – I’ve checked this out – I believe that sword he’ll be carrying when he comes back is an AR-15.

Now I want you to think about this: where did the Second Amendment come from? … From the Founding Fathers, it’s in the Constitution. Well, yeah, I know that. But where did the whole concept come from? It came from Jesus when he said to his disciples ‘now, if you don’t have a sword, sell your cloak and buy one.’

I know, everybody says that was a metaphor. IT WAS NOT A METAPHOR! He was saying in building my kingdom, you’re going to have to fight at times. You won’t build my kingdom with a sword, but you’re going to have to defend yourself. And that was the beginning of the Second Amendment, that’s where the whole thing came from. I can’t prove that historically and David [Barton] will counsel me when this is over, but I know that’s where it came from.

What is truly sad is that Christ was the ultimate man of peace.  Jesus of Nazareth brought with him a mission of love, peace, kindness, goodness, and compassion.  The only moment of violence in his life, when Simon Peter sliced off the ear of one of the men arresting him, this man of peace paused, to heal the injured party.  That’s not about a gun.  That is about peace.  One gets the impression men like those godly manly men who so disparately want to embrace their godly manhood have no earthly idea just who Jesus of Nazareth was, or what he actually taught.  If they did, they would not be making fools of themselves pretending to be manly.

Men like Boykin have created a world where women are the enemy. When George Sodini shot 14 women, killing three, a blogger, no longer online wrote about it. The comment left on his site is the most chilling.

One gets the impression that godly, manly men like Mark Driscoll, Jerry Boykin, John Piper, Kevin Swanson, Bill Gotard aren’t quite manly enough to do something that requires actual bravery.  They talk a good game, but that’s all they know how to do, talk, convict, insult, accuse, and then they bond.  Do they even realize how abjectly closeted they are?