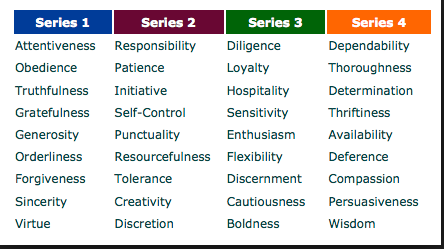 Obedience will take instructions joyfully, Obedience heeds wishes of authorities, Obedience will follow orders instantly. For when I am busy at my work or play, And someone calls my name, I’ll answer right away! I’ll be ready with a smile to go the extra mile As soon as I can say “Yes, sir!” “Yes ma’am!” Hup, two, three!

During these dark days in Ferguson, Missouri, when rational individuals stop and wonder just what on earth is going on there, there is one salient fact to remember.  According to Character Plus, the state of Missouri leads the nation in schools where their brainwashing ATI-based techniques are being taught.  Consequently, there is a very good chance, the young officer who murdered another young man, in what was basically cold blood, did, at one time or another, encounter one of the brainwashing seminars.  If he spent time in the military, he may have received his brainwashing there.  Every single branch of the United States military is now teaching it.

Character Counts goes under various names, all the ‘spin-off’ of Bill Gothard’s ATI – Advanced Training Institute.  The hallmark of the training is absolute obedience.  Not only is the poor soul who is brainwashed by the system taught to blindly obey (like ‘just following orders’) but they have been so pre-conditioned, that they expect everyone else to do the same.  When they are not obeyed, immediately, as was the instance in Ferguson, they have no qualms shooting to kill, which is what happened there.  It is happening throughout the nation. 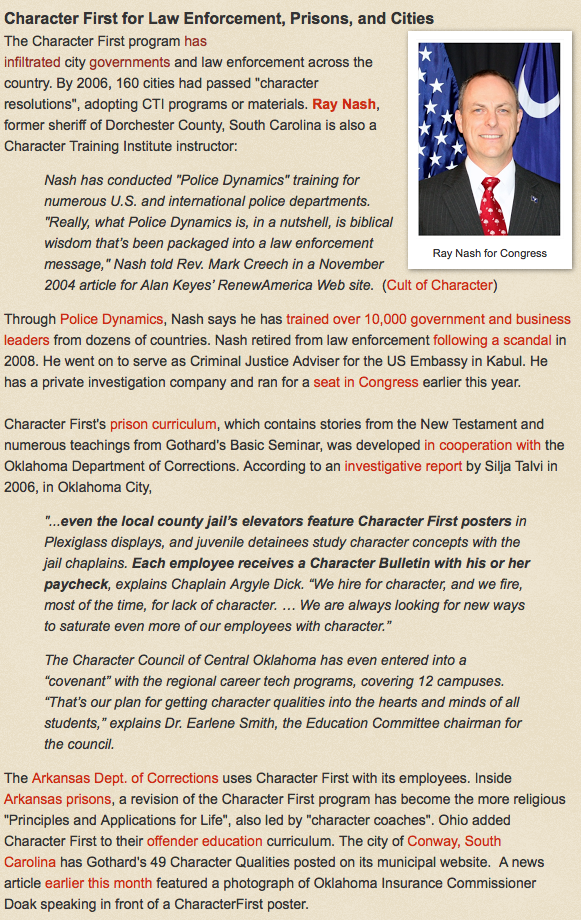 Heresy in the Heartland

Gothard’s programs were considered so important, and so helpful in turning around young lives, building character, that in state after state, young offenders were sentenced to serve their terms at one of his training centers.  This is the story of one of those young lives.

“...I worked (involuntary labor) to prepare the Little Rock, AR center for its grand opening, served tables, and huddled in the background watching Bill Gothard shake hands with city officials and proudly announce his “vision” for the coming years. We were emphatically told to never speak to anyone and remain in veritable secrecy the entire time. Police officers found us a mystery and one concerned officer spoke to me asking questions (to which I gave the acceptable dodging replies, for fear of punishment) and handed me a keychain from the Little Rock police department. I still have it today, along with a brochure from the grand opening and photographs.

I was also sent to the Eagle Springs “L.I.T.” program. I am one of those alleging abuse. I have a decade of psychologist reports verifying what it’s done to me (severe PTSD). Abuses included deprivation or extreme limitations of food, water, sleep, clothing, possessions and even bathroom facilities; solitary confinement for weeks at a time; mandatory and menial labor (up to 16 and 20 hour shifts at a time in many cases); threats with a shotgun; regular interrogations; and classic brainwashing techniques using cult and cult-approved materials; and overall forced captivity for years at a time, while lying to any outsiders and threatening or locking down anyone who might dare to cry for help in any way (for example, refusal to allow contact with parents until “students” were properly broken and too terrified to speak up). I filed a detailed report with the authorities in Oklahoma and they basically scratched their heads and never got back with me….”

This is the terrifying world in which we now live.  It is a world created by Bill Gothard.  It is not for normal people, but rather those who are easily led and will follow.  The rest of us sit back, and watch, terrified, as we have been this past week.

It is absolutely tragic. I will guarantee you, that, some time in his young life, officer Darren Wilson encountered one of Gothard’s Character First programs in some shape or another. In that way, he was as much a victim of circumstances as was Michael Brown. Thanks to the horrible brainwashing of Gothard’s programming, one young man is dead. Another’s life is shattered. At least two families are destroyed.

I have compassion for Officer Wilson. I will also guarantee that, in his life, he did everything he thought was right, to put him on an excellent career path. He had it made, a decorated officer, honored for his police work. He followed orders, and he expected his orders to be followed – immediately. In many ways he is no different from millions of other young men who came of age in post-World War I Germany. They didn’t start out to destroy lives. They were just following orders.