“To that point, if people had been in Massachusetts, under Governor Romney’s health care plan, they would have had health care. There are a lot of people losing their jobs and losing their health care in President  Obama’s economy.”..”  Andrea Saul

There is an old proverb:  Oh what a tangled web we weave when first we practice to deceive.   Perhaps the far right should be thinking about this as they attempt to digest the little mess they’ve created.  Maybe it’s time to start facing a few realities here.

We simply need to sit back and enjoy this one.  It could leave a mark.  No one deserves this more than Mr. Perfect. When you don’t really stand for anything and don’t really believe in anything, and are willing to so and say anything to get elected – and pretend to be a Republican, you deserve exactly what you get.

Eric Erickson’s panties are in a wad.  So is the rest of the little gang who allowed themselves to be pandered into so supporting Romney.

Allahpundit is not so happy with this:

“…Via Mediaite, the key bit comes at 1:25. Are we sufficiently close to the election yet that we’re obliged to give Team Mitt a pass on this purely in the interest of defeating Obama, or is there still time left to wrist-slap him for touting a deeply problematic statist health-care expansion? (It’s not just his spokesman who alluded to RomneyCare this morning but, according to Reuters, Romney himself.) If the answer is the former then I’m not optimistic about holding his feet to the fire from the right once he’s elected. The Democrats have formidable challengers lined up for 2016 in Hillary and Andrew Cuomo, if they’re willing. You don’t really want to weaken President Mitt by criticizing him for moving to the center when he’s facing a brutal struggle for reelection, do you?…”

“…I have seen the ad and have mixed feelings about its accuracy and its appropriateness. But then, in a stunning gaffe or in a rare moment of honesty, Andrea Saul, Romney’s campaign press secretary, offered what probably was supposed to be a rebuttal or counterattack but turned out to be an admission of how well Romney’s Massachusetts health care plan — one from which Romney is desperately trying to distance himself — would have helped the steelworker’s wife: “To that point, if people had been in Massachusetts, under Governor Romney’s health care plan, they would have had health care.”…”

Please pardon The Pink Flamingo while I snicker. 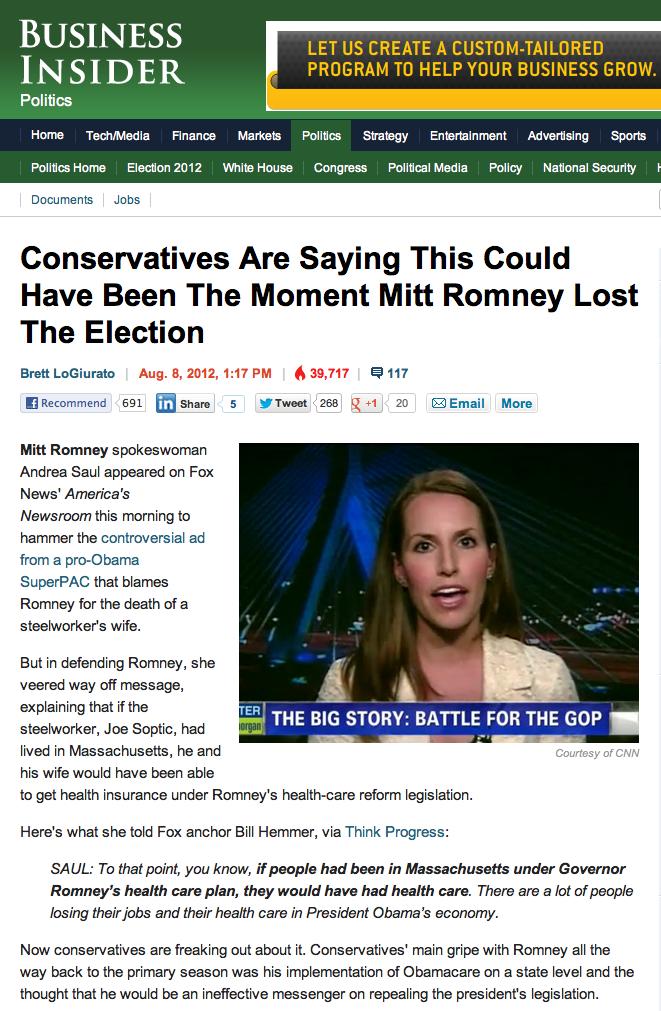 “...It isn’t too hard for the Obama campaign and his liberal allies to use Saul’s comments in defense of Obamacare. The essential argument is: the Romney campaign acknowledges that people in Massachusetts don’t have to worry about losing their health care if they’re unemployed because of a law that includes a mandate, Medicaid expansion and subsidies, and Obama wants to make sure the rest of the country enjoys those same benefits, while Romney wants to repeal the health care law. It didn’t take long for the Washington Post’s Sarah Kliff to write a post entitled, “Romneycare would cover an unemployed cancer patient. Obamacare will too.” And as Talking Points Memo’s Benjy Sarlin notes, this isn’t a one off statement by Saul. Romney himself has increasingly been touting his health care law on the stump.

It’s hard to say what type of political ramifications this specific development will have, but I do think it’s an example of a broader problem. Romney consistently attempts to make up with tactics what he lacks in vision. Romney’s campaign isn’t driven by any core ideology or governing philosophy, but by responding to news cycles. It is a campaign that was perhaps best summed up by senior advisor Eric Fehrnstrom, when he proudly tweeted yesterday, “On Fox just now Romney was asked to respond to ‘RomneyHood’ charge and called it ‘Obamaloney.’” Conservatives, rest assured – Romney will not allow himself to be called a childish nickname without responding by calling Obama a childish nickname.

The Pink Flamingo suspects all of this is to hide one of Romney’s worst problems:  His taxes.  Right now, it’s anything goes, as long as the subject is changed.  I suspect he’ll do just about anything to change that subject.

RSS feed for this post (comments)
Previous Post« No Right Wing Extremists?
Next PostHow Steve King Could Destroy the United States of America As We Know It. »
The Pink Flamingo
Bombax Theme designed by itx
﻿﻿﻿﻿﻿
WordPress SEO fine-tune by Meta SEO Pack from Poradnik Webmastera