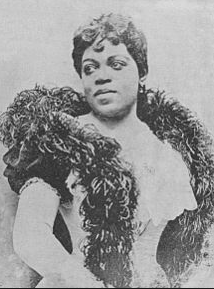 Once upon a time there was an episode of Bonanza about the good people of Virginia City engaging the top opera singer of the era.  The man was celebrated in Europe.  When a black male stepped off the stage, they turned their back on him.  Naturally, the Cartwrights saved the day, shaming the town.

Unfortunately, that was the way of the world.  If a person was not lily white, forget critical acclaim in this country.  Europe – yes, but forget the United States.   One of the first black opera singers in the US, was Sissieretta Jones. For me, her story is heart-breaking. When her mother became ill, she gave up her life, to care for her mother, dying in poverty. That alone is a soapbox for me. Even today, nearly a century later, we women, who give up our lives to care for our families, end up dealing with poverty. We are expected to give up our lives, for our parents, yet no one is there for us. The woman was the toast of Europe. Caring for her mother destroyed her. I know how that feels. I’m moving out of my condo I’m losing, thanks to having given up my life and almost my career for my parents. We just learned that the home I thought I had, must now be sold. Theoretically, in less than a month, I could be homeless. My heart hurts for Sissieretta Jones. Imagine – being one of the most celebrated opera singers in the world, and giving it up for her mother, to lose everything.

“…Following her New York City debut on April 5, 1888 in Steinway Hall, she was nicknamed “the Black Patti” after being compared to the Italian prima donna Adelina Patti, well-known at the time. The nickname stayed with her throughout her 30-plus year career, although she preferred to be called Madame Jones. During the 1880s and 1890s, Jones performed at Madison Square Garden, Boston’s Music Hall and the World’s Columbian Exposition in Chicago, Illinois. She first performed at the White House in February 1892 for President Benjamin Harrison and returned to appear before Presidents Grover Cleveland, William McKinley, and Theodore Roosevelt. She also appeared before the British Royal Family. Jones’s international tours took her to the Caribbean, South America, Australia, India and Southern Africa as well as London, Paris (France), Berlin (Germany), Milan, Munich, and St. Petersburg (Russia). By 1895 Jones had become the most well known and highly paid African American performer of her day.

In the 1890s, she formed Black Patti’s Troubadours, taking advantage of the popularity of black musical comedies, originally called “coon shows.” Jones sang opera selections and spirituals at the end of the show, rather than closing with the typical cakewalk. The group was one of the most popular shows on American stage, touring throughout the United States; the careers of numerous black performers were launched by their initial appearances with the Black Patti troupe.

African Americans began to see the black musical comedies as reflecting negatively on their race, and the group’s tours wound down, with a 1915 last performance at New York City’s Lafayette Theater. Jones moved back to Providence, Rhode Island and cared for her mother and her two adopted children. Her husband’s gambling and lavish misuse of their money had led Jones to divorce him in 1899. In spite of her many years of high earnings, toward the end of her life Jones needed to rely on financial assistance from the National Association for the Advancement of Colored People (NAACP). Sissieretta Jones died of cancer on June 24, 1933 at the Rhode Island Hospital in Providence, Rhode Island. …”

I can’t find a recording of her.  There are recordings that claim to be ‘Black Patti’ but are of something entirely different. That could be the most tragic part of it.  From what I can tell, her voice is lost to us.  When she returned to the US to care for her mother, her income was $20,000, making her the highest earning African American in the country.  Racism kept her from singing formal opera. It eventually broke  her.