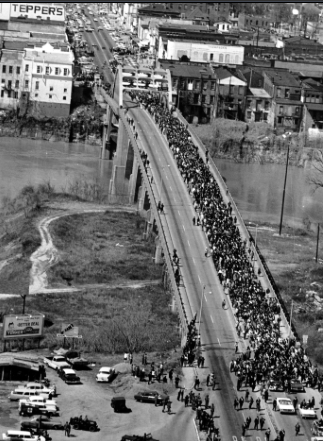 Edmond Pettus was a Grand Dragon of the Alabama Ku Klux Klan.  He was also a United States Senator for 2 terms, and a Confederate general.  To honor him, in 1940 a bridge across the Alabama River was named after him.  On March 11, 2013, it was declared a National Historic Landmark, not because of the racist for whom it is named, but for what happened on it, 50 years ago today.

“…In 1965 voting rights for African Americans were a contentious issue. In Selma, Alabama, voting rolls were 99% White and 1% African American.The case of Jimmie Lee Jackson showed how African Americans were treated; as state troopers and other locals started a fight with some 400 African American demonstrators, Jimmie Lee Jackson was shot in the stomach, and he died eight days later. As word reached the people, including Martin Luther King, Jr., SCLC civil rights activist James Bevel strategized a plan for a peaceful march on the state’s capitol. There were many acts just like this one that involved killings, and many more that involved economic and health problems. On March 7, 1965, armed officers attacked peaceful civil rights demonstrators attempting to march to the state capital of Montgomery in an incident that became known as Bloody Sunday….”

In 1969, former Atlanta mayor Andrew Young, carried the Olympic Torch over the bridge.  He later said, “We couldn’t have gone to Atlanta with the Olympic Games if we hadn’t come through Selma a long time ago.”

There is now a discussion as to whether the bridge should be renamed.  It’s a national landmark, so forget that.  It’s also 70-years-old.  In bridge lives, it’s nearing the end of it’s usefulness. One of these days, a nice, shiny new bridge will replace it, and be appropriately named.  Until then, those who live outside of Selma will sign online-petitions demanding a name-change, never comprehending you do not change the name of a Registered National Landmark.  It is set in stone, for better or worse.  Also, community leaders in Selma want the name to remain. 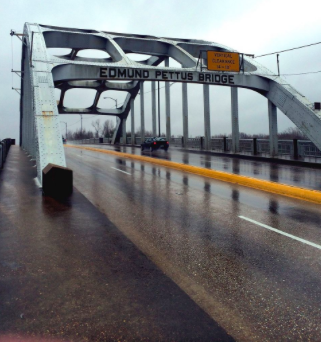 I agree.  The bridge represents just that – a bridge between Alabama’s racist past, and the hope of a future where the only qualifying factor should be the quality of their character.  We have a serious problem in this country.  Not only the right, but the left has a tendency to want to erase, delete, and cover-up anything that might make someone uncomfortable.  You can’t go around deleting history, and not pay a price for it.  Yes, history has been re-written by the winners since history was history, but, still, you would think, this day and age, we would over-come the need to do just that.

If you change the name of the Edmond Pettus bridge, then you eliminate the conversation.  If the name remains the same, then the dialogue must continue. You change the name and you start, little by little, deleting the KKK from history.  You delete what it was, and the harm it did.  When fools do not know their history, they are doomed to repeat it.

One of these days, this moldering old bridge is going to need to be downgraded from a working bridge, to a pedestrian bridge. It then goes from a landmark, a former monument to a racist, to a living, breathing history museum, and a monument to the victory of freedom over oppression. 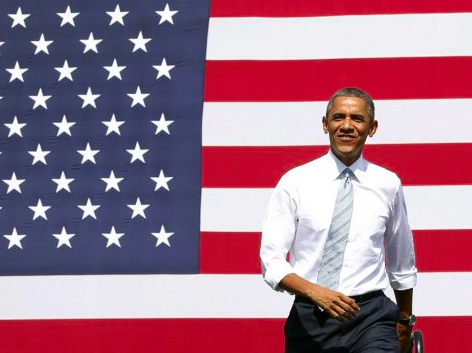 I don’t know about you, but I, for one, am thrilled that We the People of the Unites States were finally able to over-come racism and bigotry.  Walking across that bridge will be the President of the United States, his wife and family.  Edmond Pettus and his kind lost. Not only did the very people he sought to oppress and destroy gain the right to vote, but a representative of that very race is now President of the United States.

There are moments when I am extremely proud to be an American.  This is one of those.  Sure, I get pissed with him, but, I voted for Barack Obama, and you know, I’m still glad I did.  No matter how the haters will try, they cannot destroy  this image.  THIS is what Bloody Sunday was all about.  All that truly matters is the quality of a person’s character, not the color of their skin.

RSS feed for this post (comments)
Previous Post« Is Macy’s the Future of Retail
Next PostThe Silly Season Is In Full Swing: Adelson vs. Koch »
The Pink Flamingo
Bombax Theme designed by itx
﻿﻿﻿﻿﻿
WordPress SEO fine-tune by Meta SEO Pack from Poradnik Webmastera