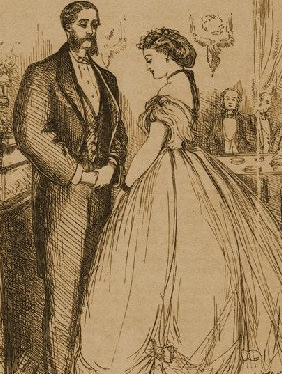 “…”…and there’s another problem is the number of married mothers who out-earn their husbands… I don’t think that’s a healthy dynamic to have a wife out-earn her husband because so much of his sense of worth as a male is tied up in what he does vocationally and providing for his family. That’s his calling.”…” Bryan Fischer

Yes, they are that insecure.  Fischer thinks if a woman out-earns a man, it is going to put some stress on their marriage.  Marsha Blackburn thinks that women don’t need equal pay laws.

When do we get to state that this is officially funny.  After putting up with their misogynistic you know what for years, The Pink Flamingo is beginning to realize the alleged Neanderthals of the far right have a wonderful sense of humor. There is no other logical explanation for the reaction the usual suspects are having over the information that 40% of working mothers are now the primary breadwinners for households with children.  79% of Americans reject the idea that women should return to traditional submissive roles.  Only 21% of Americans think the trend of women having to do all the work is a good thing for children and society as a whole.  The Pink Flamingo is among those numbers.  It’s not a good thing, when women are required to do everything.  It’s not a good thing when single parent homes bring in an average of $23,000 a year, compared to the $80,000 of working couples.  In other words, women still earn $81.00 for every $100 men earn.  If you don’t think employers prefer paying less for women, you are not living in reality. 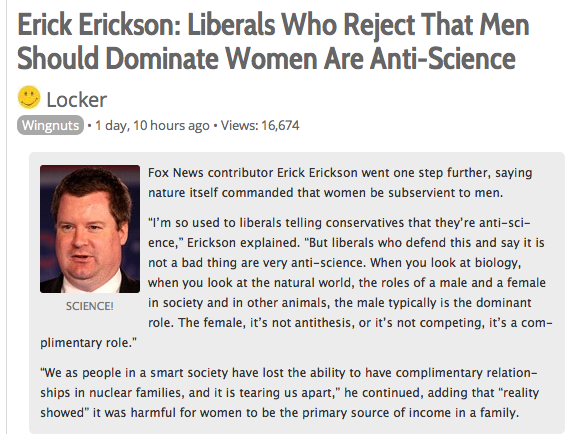 “…Erick Erickson, in his continually futile quest to make himself feel like a big, tough manly man by shitting on women, has decided to respond to the howls of laughter at his impotent quaking in fear at the possibility that women’s financial pull is giving them decision-making power in the home. Because everything—literally everything—with him is about pretending his fantasies about being powerful and intimidating are reality, he’s trying to pretend that he teed people off with his comments about women’s natural subservience….”

All The Pink Flamingo can say about dudes like Rush Limbaugh, Erick Erickson, Bryan Fischer is that they have weird fantasies about the role of women in the world.  If it weren’t so serious, it would be laughable.  Fortunately, they lave lost so much credibility, they are laughable.  Jonathan Alter wrote:

Erickson is a piece of work. 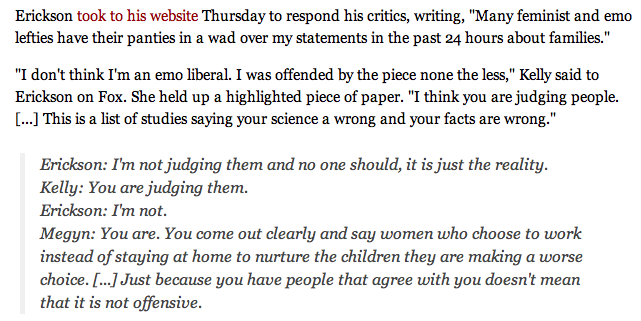 This is MUST SEE TV!  I didn’t think Megyn Kelly had it in her.  If you could get her away from Roger Ailes and his manipulation, she might have a chance.  This also shows what a total ass Lou Dobbs is.

Bryan Fischer thinks that Kelly is a resentful, hostile ‘dragon lady’.  I guess that’s because she’s a normal American woman who had a brain and knows how to use it.  Having a brain would cause one to abjectly thumb one’s nose at the idiocy of jerks like Fischer, Erickson and Dobbs.

“...Calling Kelly a “feminist on steroids,” Fischer said she was “resentful,” “angry,” “hostile,” and “bitter” to these “poor guys” who were just trying to defend the biblical view of the gender roles. Fischer went on to say that Kelly was driven by an unhealthy, bitter “angry feminist energy” before finally just calling her a “dragon lady.”…” 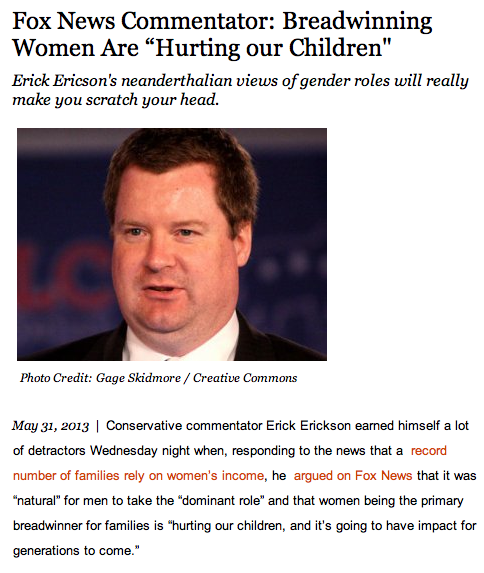 According to Fischer, Neanderthal:

“…”Husbands are to use their stamina and their strength and their brain power — not that they’re smarter than women, I’m not saying that — but God’s given them a brain, and the purpose for using their mental ability is to provide for their families, to use their physical strength to work hard, to work long hours, to use their physical strength to protect their wives and protect their children. The biblical pattern is for a wife and a mother to focus her energies, devote her energies on making a home for her children and for her husband.”…”

Do we laugh or cry?

I think we need to recognize the real problem here is the fact that little men like Dobbs, Erickson, Fischer, and Limbaugh are absolutely terrified of women.

Bill Kintner, a GOP Senator in Nebraska says that women don’t even understand themselves. The Pink Flamingo thinks that single interview describes the whole problem within the GOP and what is budding throughout the country. For some strange reason men are losing respect for women. The more subservient they become, the more they try to be dutiful little wives, chaste, modest, with eyes downcast like some inbred Amish woman, the less respect the men of the right have for them.

In California, a woman was forced to pay support to her ex, who was convicted of raping her daughter, many times, over a period of years.

The other day, The Pink Flamingo came across a headline from the Huffington Post email. The headline had nothing to do with how absolutely atrocious the red carpet gowns were, but about some slut’s boobs hanging out – half way. (If you want to know how bad the costumes were, check out the slide show. Just don’t eat anything before you do, or you will gag, it was that bad, and the shoes were even worse). 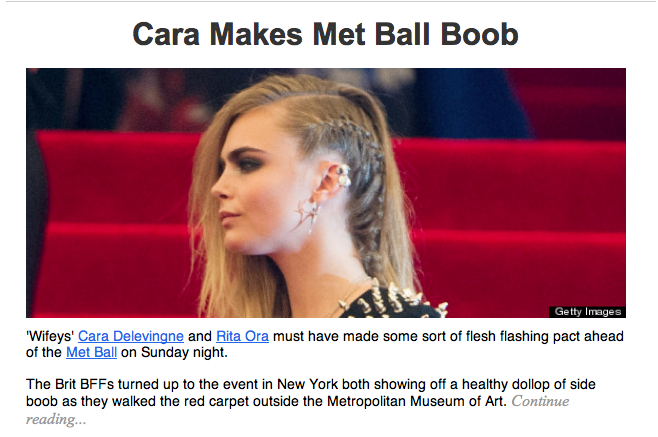 Evidently the US is now part of some rape culture. There’s no other way to define what is going on in the military. According to one report, there is an average of 70 sexual assaults in the military per day.

RSS feed for this post (comments)
Previous Post« The Uncomfortable Truth About Being Overweight
Next PostBucks for a Barihunk! »
The Pink Flamingo
Bombax Theme designed by itx
﻿﻿﻿﻿﻿
WordPress SEO fine-tune by Meta SEO Pack from Poradnik Webmastera