The Girlie Men of Biblical Manhood 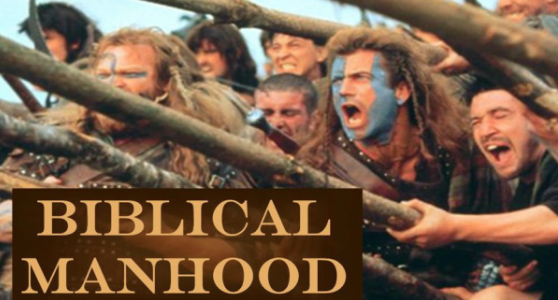 Jerry Boykin, of the Family Research Council and über manly man has a vision of Christ as this stinky, smelly, gun-totin’ Phil Robertson type of muscle bound man’s man.   He and his little friends have a fairly interesting view of men – and men’s men.  There is nothing sissy about the new version of Biblical Manhood.  Oh, sure, they may be hooked on Viagra, but what the heck, they’re man, durn it!   He Man Woman Hating Men’s Men, Biblical Men.  Their desire to be manly men is just, well, it’s precious.  It’s as if, by proving how manly they are, they can prove they aren’t sissies…. as in gay.

There is even a ‘statement’ on Biblical Manhood and Biblical Womanhood.  Yes, I’m serious.  It’s gone that far.

For some strange reason Bill Gothard rules supreme when it comes to the roles of men, women, children, husbands and wives – ‘godly’ of course.  I don’t know about you, but I find it both extremely humorous and extremely alarming that a man who has never been married, never had a family, and no children had the nerve to tell people how to manage their lives.  It is both hilarious, stupid, idiotic, and alarming that people actually believe him.  He’s so strange, and so powerful people like the Duggars wait 40 days after having a male child and 80 after having a female to have sex.  Bill Gothard, who lived with mommy & daddy all his life pronounced it so.

You see, Bill Gothard has ‘authority‘.  He has, allegedly, been anointed by God.   A young woman, who has survived Gothard’s abusive cult wrote:

“…One of my biggest griefs with his version of patriarchy is that it enables narcissistic, controlling, manipulative, and abusive men to continue their abuse under the name of “God-given authority as the husband and father to rule over the wife and children.” Fathers who are abusive are enabled through this ideology by basically being “God” for their family. There is no one above them, and they are the ultimate rulers. God speaks through them, and never to the wife or children. It’s no wonder that I have seen, read, and watched so many children who were raised under this mindest leave the faith because of the hypocrisy they had seen in their dad….”

“...However, as his ministry continued to grow, problems began to emerge as well. In the mid-70’s, Bill Gothard’s brother (who was at the time the vice-president of the ministry), was involved in sexual misconduct with several ministry employees, though Bill chose not to deal with it. The scandal finally came out into the open in 1980. Dr. Samuel Schultz, professor of OT at Wheaton College and board member since 1965, resigned, ….Earlier, Gothard himself had indecent contact with some of his female staff, and “admitted in staff meetings that these actions were ‘moral failures’ on his part…..”

There are rumors that the sexually repressed Gothard, himself, likes ’em young, nubile, and unable to get away from his ‘authority’.  He sends emails out to 90,000 ministers – world wide – each week.  The influence the man welds is staggering and frightening.  He also has some very strange ideas. I guess it’s manly, in a girlie man sort of way.

“...Gothard, who has never been married, teaches that dating is prohibited (a rule echoed by the Duggars on their television show) “because you’ll give away too much of your heart.” As the blogger Hopewell wrote on Garrison’s blog, the Duggars “view dating as unhealthy, leading to a diminished capacity to love your eventual spouse… They view adulthood as something that begins with a parent-approved marriage and at no other time.”

Indeed sex is so taboo it’s not even discussed—even to condemn homosexuality. “To even mention the name of [homosexuality] was a sin,” said Jack. “To talk about sexuality in general was wrong. The ‘S’ word as we called it was in my family absolutely never mentioned. Things like masturbation—I didn’t even know what it was until I was 19 or 20. Sex was considered bad and wrong and almost like the boogeyman that you don’t talk about.”

Gothard’s own brother, who worked for IBLP, was dismissed from his organization after it was discovered that he was having sex with students, and the former head of the homeschooling curriculum, Jim Voeller, was dismissed for leaving his wife and seven children for his secretary.

Prof. Allen argued in his critique that Gothard’s “repressed views of human sexuality” neglect even biblical descriptions, such as in the Song of Solomon, of the “beautiful eroticism” and “delight in human sexuality,” instead making it “a disgrace even to speak of such.”…”

All  you need to do is Google the term “Biblical Manhood” and you will find seminars, religious organizations, conferences, books, and even a guide to Biblical Manhood where the manly man can serve their wives, via baseball, and serving God.  I’m a baseball fanatic.  I just don’t know where it is mentioned in the Bible, though.  Evidently John Piper helped invent the term.  He’s also afraid of women.

“…When those under his care are in danger, a real man moves to protect them, even being willing to give his own life (John 15:13). When he is courting a woman or in a marriage relationship, he honors that woman and treats her in an understanding way, being kind, gentle, and protective of her (1 Peter 3:7). He lovingly leads his wife, taking initiative and responsibility for the course and direction of the home, yet all the while listening to her and always seeking to do what is in her best interests (Ephesians 5:25, 28, Colossians 3:19). He does his best to understand her and to be to her and for her what she needs. He treats her not as someone lesser but as an equal and fellow heir of eternal life in Jesus Christ (1 Peter 3:7). When he is raising children, he trains them in God’s Word and does not provoke them to anger (Ephesians 6:4). …”

So, you can take a journey to Biblical Manhood.  There is one thing most of these commentaries have in common.  The so-called men are always complaining about their lot in life and about women.  They are terrified of women.  They are afraid of women who are not modest.  They are so unsure of themselves and their natural male ‘urges’ that they think women should be basically covered by a burka, so they won’t be tempted.   We’re dealing with a specific group of men who are so impotent, so insignificant, so pathetically little that they must control woman.  They are terrified of female sexuality.

“…How can women wield absolute power in the realm of sexuality? Well, the degree to which female sexuality is celebrated and publicly flaunted in our culture is unprecedented. I cannot but wonder if there is a connection between the fact that (1) a lot of women are increasingly incapable of relating to men in healthy ways and (2) women are increasingly resorting to extreme measures to beautify themselves and flaunt their sexuality in front of men. In short, we may have a craven attempt to heighten the demand for something that is losing its real value….Chivalrous male-bashing: There may be some acknowledgment that wanton displays of female sexuality are a problem, but men will be held solely responsible. Men will be regarded as lecherous beasts, while fashion models, porn stars, and other immodest women will be regarded as precious, unfortunate victims who have been exploited.

All of these approaches are blindly myopic and refuse to acknowledge the biological and psychological realities of male sexuality. These approaches have their roots in woman-firsterism, the “blank slate” lies of feminism, and the such like.

On the third point above, I will say that women who knowingly and voluntarily flaunt their wares cannot in any way be called victims. They are no more victims than a drug pusher on some street corner who sells an ounce of crack cocaine to a minor is a victim. These women know what they are doing. On a religious note, if lust is a sin in men, then so is inciting that sinful desire. Jesus said, “It is inevitable that stumbling blocks come, but woe to him through whom they come!” (Luke 17:1). The logical end is that there is a place in hell for immodest women if there is one for the male lecher….”

I spent about an hour reading through this guy’s now defunct blog.  He’s complaining, wining, and acting like a girl. A Biblical Man is one who is the head of his household, forcing his wife into submission.  His wife is a good little helper.  God speaks to him, and he tells his wife what God wants her to do. In other words equate a Godly, Biblical Man = god.

“…Godly men want women they can respect. They want women who dress so that other men aren’t ogling them.  Our clothing is a billboard to the world that communicates a great deal about our level of respect for so many important areas of our lives! Our clothing, demeanor, behavior, attitudes and words are a reflection on our husbands – so we do need to look our best, feminine, attractive and beautiful – but not seductive in public.  And our clothing, our behavior, our words and our attitudes are also a reflection on Christ. I pray we might choose our clothing wisely and find things that honor God and our husbands!…Immodest clothing broadcasts the message to men that I do NOT respect God, my body, my sexuality, or men – that I plan to use my body to try to have power over them, or that I am sexually available to them.  Yes, you read that right.  A man’s brain is wired so that the clothing a woman wears tells him a great deal about how sexually available that woman is to him regardless of his intentions and regardless of her intentions.  That is why prostitutes dress to advertise their bodies.  IT WORKS!….”

Oh, and they must take manhood back.  Where did it go?  Are they that afraid of women?  Are they that insignificant?  They are to ‘lovingly’ lead their wives, and women are to submit to them. They decry feminism.  They don’t want women to have any other role other than wife and brood mare.   I guess if they didn’t complain so much, it wouldn’t be so silly, but it is.

They are so determined to be manly men that they stomp around with their permed hair, buffed nails, and manly attributes.  Women terrify them to the point where there are tales that evangelicals pop Viagra the way I pop Tums.  They can’t allow a woman to be ‘immodest’ because it might give them male urges. They can’t allow women to be in a position of leadership.  Women must now, in order to be ‘Godly’ submit to them.

I don’t know about you, but this is something entirely new.  Poor little girlie men.