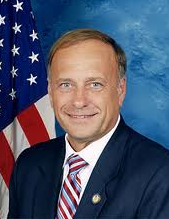 Iowa is bought and paid for by the far right, libertarian loons who are owned by the Brother’s Koch and the Tea Parties.  It is also home to Steve King, who may be the most openly racist and bigoted member of Congress.   Now that Tom Tancredo has gone the way of the Dodo, Steve King is the most openly white supremacist member of the GOP in the House.  I say White Supremacist, because, when you hang out with the folks of the Social Contract Press, you are a White Supremacist.  Steve King does just that.

The Pink Flamingo takes that back.  Walter Jones of North Carolina appeared on the Political Cesspool show.  Then again so did Ron Paul.

He has introduced a bill to outlaw Birthright Citizenship.  One suspects if he could put a caveat on it, he would exempt those who speak English, have blond hair and blue eyes.  No honorable person who wasn’t a bigot would share a conference stage with Peter Brimelow and John Derbyshire, agreeing with them. 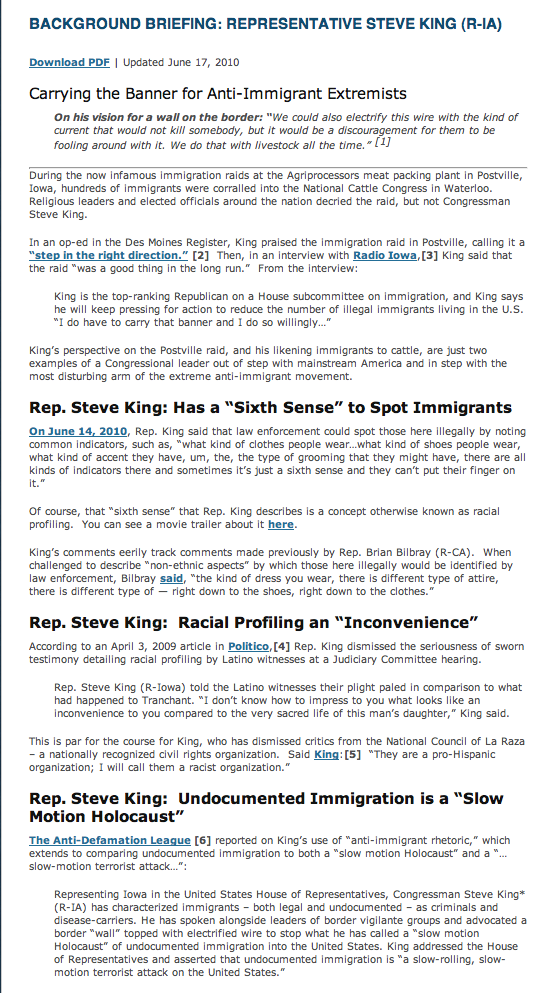 King has a history of dealing with the lovely little White Supremacist leaning bigots of the Tanton Network.

“...This summer, Rep. Steve King of Iowa’s 4th District authored and signed a fundraising letter for the anti-immigrant group ProEnglish. The letter was printed on his own letterhead, and carried his own picture and signature, as well. To solicit funding on behalf of a group staffed with individuals who are well-documented as activists within the organized white nationalist movement would be deemed career-suicide by many politicians.

But not by Rep. King, who by all rights seems a Teflon politician. His own record of bigotry won’t even stick to him, so why should that of others? King has worked closely with ProEnglish for an extended period of time.

Back in February at CPAC 2012, Steve King spoke on a ProEnglish panel. King shared the stage with white nationalist “intellectuals” Peter Brimelow and John Derbyshire, both of the overtly racist VDARE.com. Both career bigots. Unfazed by his stage-fellows, Rep. King strolled up, shook Robert Vandervoort’s hand, executive director of ProEnglish, and began speaking. Rep. King has also worked with ProEnglish, using the group to rally support for his long suffering English-Only bill, HR 997, which has failed to be voted into law for a decade or so.

To that regard, towards the end of July he announced that he was inviting a ProEnglish board member to testify before a Congressional subcommittee about the social benefits of the bill….”

It should come as no surprise that King voted against relief for victims of Hurricane Sandy.  After all, they are just low-life.

“…The idea that giving assistance to Americans in need is wrong permeates the Republican Party, and why Republicans are outraged when the policy hits home epitomizes hypocrisy.  Chris Christie, in fact, is as hypocritical as any Republican because in September 2012, he headlined a fundraising event for Representative Steve King because Christie desperately wanted Republicans to maintain their majority in the House; King famously refused to vote for federal relief for victims of Hurricane Katrina. King announced in October 2012 that he would not support aid for Sandy victims unless there were specific provisions so the funds were not used for “massage parlors and Gucci bags” like after Katrina.  After King was criticized for his extreme stance on disaster relief he said, “Sometimes you have to take lumps, but you have to do the right thing,” and in Republican circles, doing the right thing is telling victims of disasters and Republican economic malfeasance to “suck it up and be responsible.”…”

Shows how out of touch King is.  In the New York area, people are more likely to purchase Louis Vuitton than they would Gucci. Guess what?  The money King voted against was to replace the funds in the federally mandated flood insurance fund.  Seems like a goodly number of people who lost everything due to the hurricane had purchased flood insurance.  Guess what?  If their contents were insured, then they have every right to go out and by Gucci bags.  They paid for it, already. 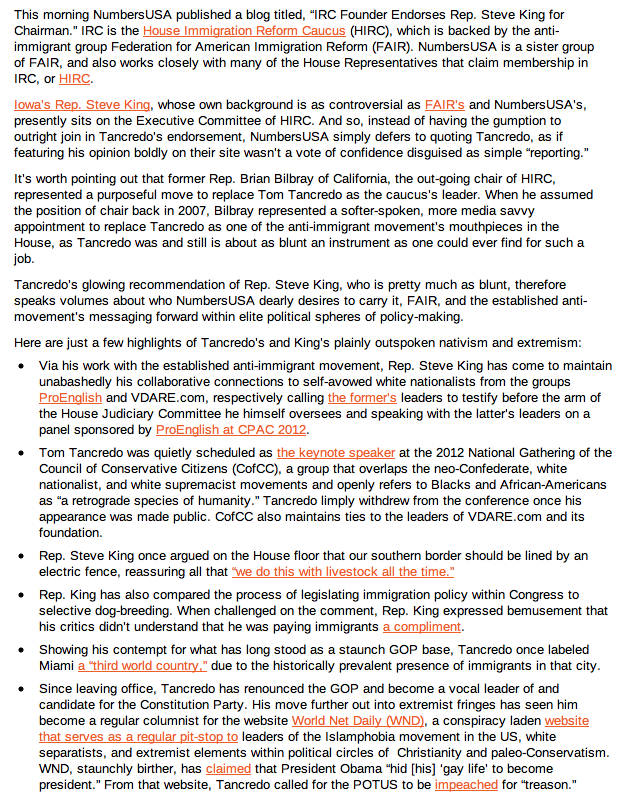 The Pink Flamingo doesn’t like bigots, white supremacists, or anyone remotely involved with any of the organizations that have anything to do with them.  I also don’t appreciate elected officials who call themselves Republicans hanging out with them.  It’s time we start cleaning House.

And – people wonder why The Pink Flamingo voted for Barack Obama!