Imagine doing polls and not factoring in the Hispanic vote.  Allen West went after Patrick Murphy for making cuts in Medicare – and West backed the cuts.  One big time anti-abortion Tea Party GOP( Rep. Scott DesJarlais (R-TN)) forced his mistress to have an abortion.   According to Roger Rivard, some girls are just easy to rape!  Paul Ryan even endorsed him!

Can you imagine how difficult it must be to be a woman, having lost both legs in a chopper crash in Iraq, and trying to find something decent to wear?

Can GOP candidates for the House become any more reprehensible?  Joe Walsh went after Tammy Duckworth for shopping!  Not only has he insulted our wounded vets because of the way he is treating her, but now he’s insulting her for being a woman.  What the hell is wrong with a woman picking out a dress for a big speech?  Is the man that stupid?  Is he that much of a jerk?  The man then said that he never aid Duckworth, who lost both legs in a chopper crash in Iraq.

“…“I was marching in a parade in Schaumburg (Ill.), Sunday, two days before the Democratic convention,” Walsh said, holding up the photo, “when Tammy Duckworth was on a stage down in Charlotte (N.C.) — if you can look at the picture — picking out a dress for her speech Tuesday night.”

Back in September, Walsh issued a statement attacking Duckworth’s speech at the convention, and accusing her of dodging debates: “It has become abundantly clear that at this point the only debate Ms. Duckworth is actually interested in having is which outfit she’ll be wearing for her big speech.” Walsh pointed to the photo on Tuesday night as a way to explain what he said previously.

At the very raucous debate in Rolling Meadows, Ill., the Daily Herald reported, Walsh followed up on that, saying that Duckworth only says what top Democratic strategists advise her to say.

“And I think darn near everybody in this audience is sick and tired — and I’ll say with a smile — of Republicans and Democrats, elected officials, who seem to poll test every syllable of every word that they utter, because they’re so afraid of offending people and losing votes,” said Walsh. “You’re seeing the perfect example of that up here on this stage. Tammy Duckworth will not say a thing that David Axelrod and her advisers won’t let her say.”

Members of the audience booed profusely, but Walsh wasn’t fazed. He went on to address his criticism of Duckworth picking out her clothes for the Democratic convention — by holding up the photo.

The audience booed again, very loudly, as Walsh was finishing his statement. For her part, Duckworth accused Walsh of trying to distract from the issues — and she got in a kicker of her own.

“And yes, I do sometimes look at the clothes that I wear,” she said. “But for most of my adult life, I’ve worn one color — it’s called camouflage.”…”

The way Joe Walsh is treating Tammy Duckworth is just proof that the GOP, once the party of standing up for the military, no longer gives a damn about it.

“…Meanwhile, a friend of Doherty’s told a Seattle radio station Doherty remembered Romney repeatedly introducing himself at the Christmas party.

“He said it was pathetic and comical to have the same person come up to you within only a half hour, have this person reintroduce himself to you, having absolutely no idea whatsoever that he just did this 20 minutes ago, and did not even recognize Glen’s face,” Elf Ellefsen told the Ron & Don Show.

Why would a man, who didn’t give a damn about our military, not giving even a brief mention of our troops in his nomination acceptance speech, even bother mentioning a man like Glen Doherty?  Even when the man’s mother asked Romney to stop, his afternoon speech still contained the same reference.

But – this is without a doubt, The Pink Flamingo’s favorite.  It’s like this, folks, it just doesn’t get any better. 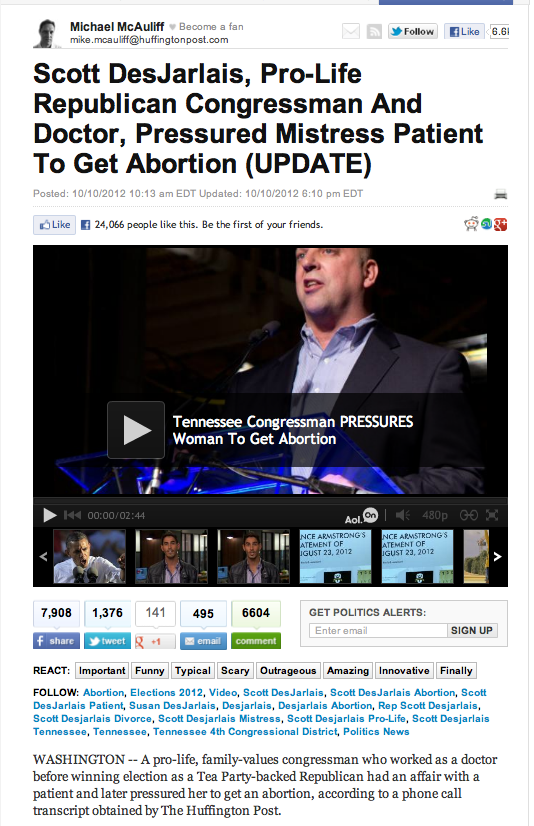 “…Senator Claire McCaskill’s campaign released blistering attack ads against Representative Todd Akin on Wednesday that featured three Republican women who said they were rape victims and criticized Mr. Akin for his opposition to allowing sexual assault victims to have access to emergency contraception.

In three separate 30-second clips, each woman – listed only by a first name, Diana, Joanie and Rachel – stares directly into the camera and makes her pitch against Mr. Akin, accusing him of denying women a right to choose.

Diana described herself as a pro-life mother who never has voted for Ms. McCaskill, the one-term Democratic Missouri senator, but now she will because of Mr. Akin.

“In the hospital I was offered emergency contraception,” she said. “Because of my personal beliefs, I declined. Here’s what else I believe: no woman should be denied that choice.”…”

Then there is the Bengazi narrative.  Let’s be brutally honest here.  The reason the GOP is on the story, making trouble is because (drum roll please) they have every intention of taking out Hillary before she event thinks of running in 2016. Don’t make Bill mad.

“…“I had a different reaction to that first debate than a lot of people did,” Clinton told nearly 2,000 supporters at a campaign rally for Obama and other Democrats. “I thought, ‘Wow, here’s old moderate Mitt. Where ya been, boy?’”

Clinton compared Romney’s performance in Denver to a sales job at the Boston private equity firm where the Republican presidential nominee made his personal fortune.

“It was like one of these Bain Capital deals, you know, where he’s the closer,” Clinton said. “So he shows up, doesn’t really know much about the deal and says, ‘Tell me what I’m supposed to say to close.’ The problem with this deal is the deal was made by severe conservative Mitt,” alluding to Romney’s description of himself in February as having been a “severely conservative” governor in Massachusetts.

A few days before the debate, Clinton added, advisors had urged Romney to recast himself as a moderate.

With a mocking tone that drew hoots of laughter, Clinton imitated Romney saying, “I don’t have that tax plan I had for the last two years. Are you going to believe me or your lyin’ eyes here?”…”

The sleeae factor is rubbing off on the rank and file.  Currently, Mitt Romney’s obnoxious bots are vile, rude, arrogant, bullies.

The Pink Flamingo does try to to behave with a modicum of civil discourse. Granted, I have a tendency to get a little snippy when I’m driving through town, behind a dozen tourists who insist on driving in middle of the road, take up two lanes, and drive slow enough for you to walk past them and bet them to the other side of town!  There’s a certain hyphenated word that I have been known to use, frequently, but then again, you get behind a slow moving Texan taking up half the road and you’d use it too!

Now that confession time is over, The Pink Flamingo is something of a manner’s b*t*h.  The reason I am known for my pink flamingos is due to my demand for proper manners.  When I was leading the youth group at my church, I taught the girls manners, table manners, etc.  I can honestly say that they learned how to plan, execute, and clean up a reception for 205 people including the bishop.  They learned how to go anywhere, including taking tea with the Queen or visiting the White House.

One Sunday afternoon, I planned a very proper tea party at my condo.  The girls and their mothers were invited for what was literally High Tea.  My table was perfect with my sterling, crystal, china, linen, flowers, candles, all the proper goodies.  I look down and see several little pink flamingos on the table.  I had told them it was one thing to stick a pink flamingo somewhere and know it is tacky and another to do it and think you are really decorating!  From then on, no matter what I would do, the girls would find a pink flamingo and put it – anywhere on a table.

It’s all about manners.  I’m sick and tired of of these people.  This is an example of what went on Thursday night, on Twitter.

This is an example of the Romney Bot, and how they act.

This is an example of today’s Republican Party, under the leadership of Mitt Romney.  They are rude, obnoxious bullies, who don’t mind using obscenities.  They threaten.  They intimidate.  They attempt to destroy one’s reputation.  Now, not content to rest on their dubious laurels of destroying the GOP, they are now, in some places, physically threatening and intimidating Republicans who are refusing to vote for Mitt Romney.

To put it succinctly, they are destroying the GOP.