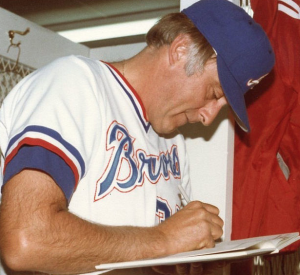 This has been a long week.  Friday night, I was so tired, I couldn’t sleep.  Two days have been spent unloading storage units for my mother, and moving furniture down to her storage room.  We unpacked and stacked over a thousand books. I lifted a Queen Ann wing chair and pulled a muscle in my chest.  My legs still hurt.  My back hurts.  I can’t stay awake.  I had no idea what to write for today, then I found an amazing article about throwing a knuckleball.

It started me thinking that this is getting to be the time of year when the Braves start announcing their caravan stops.  Oh, yes, as the local baseball fanatic, and because of my gender, I was always front and center when the Braves would hit town in late January. This photo of Knucksie is just so typical.  I was so fortunate to have caught the attention of one of his best friends.  Ergo, when the Braves came to town, I would get special VIP attention.  It was a blast, esp when I would get to hang with the greatest home run hitter in the history of the game!

I have a soft spot for knuckleballs, having come of age watching Phil Niekro and the legendary Hoyt Wilhelm.  And, yes, there is a science behind the knuckleball.

“…Wilhelm was best known for his knuckleball, which enabled him to have great longevity; occasionally as a starting pitcher, but mainly as a specialist relief man (in which role he won 124 games, still the record for relief pitchers). He is recognized as the first pitcher to have saved 200 games in his career, and the first pitcher to appear in 1,000 games. He is also one of the oldest players to have pitched in the major leagues; his final appearance was 16 days short of his 50th birthday. Wilhelm retired with the lowest career earned run average of any major league hurler after 1927 (Walter Johnson) who pitched more than 2,000 innings….”

Watching this caused me to remember that, years ago, Wilhelm showed me how he threw his infamous, and it was infamous, pitch.   Brooks Robinson once said that “…Hoyt] had the best knuckleball you’d ever want to see. He knew where it was going when he threw it, but when he got two strikes on you, he’d break out one that even he didn’t know where it was going.“…” 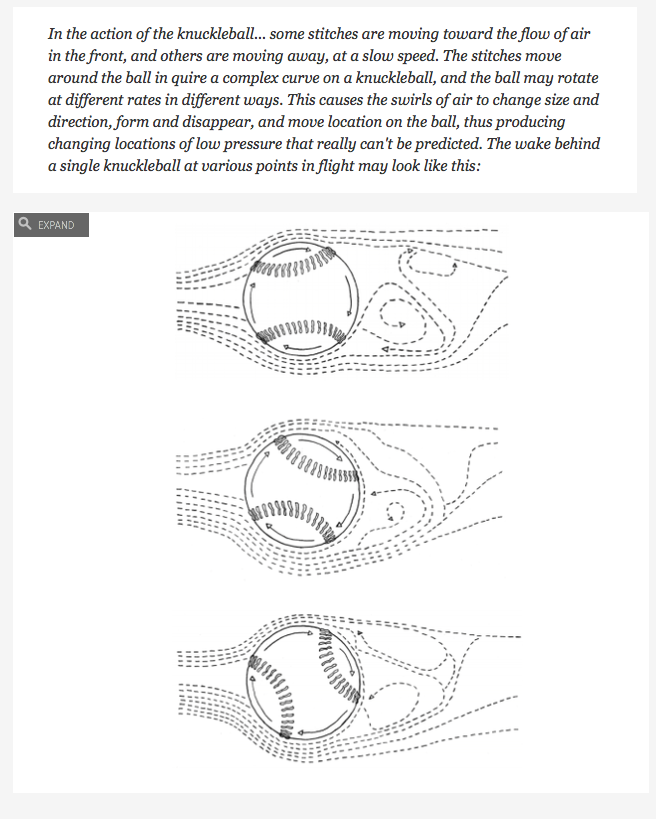 The day Phil Niekro was elected to the Hall of Fame was one of those days I celebrated!

It’s getting close to that time of year…!

I love baseball.  Funny how coming off a World Series win leaves the fan terribly self-satisfied, as if you were part of the equation for the win.  It also leaves the fanatic longing for spring.