Today Is My Father’s Birthday 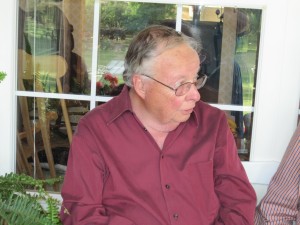 My father would be 91 today.  He lost his battle with Alzheimer’s on October 18. Every year, on his birthday, he would have a huge bash, from the time he was a little kid.  He always had a party, never fail, year in and year out. The menu would always include BBQ, baked beans, scalloped potatoes, garlic bread, and slaw.  Maybe it would include corn.  Sometimes there would be watermelon.  Every year, for 63 years, my mother would bake him a chocolate devil’s food cake with white, fluffy marshmellow icing.  It all depended on the circumstances.  He would party from his birthday to Father’s Day, expecting gifts and celebration on both days.  Woe unto us if we did not.  He required attention and pampering.

We would start at midnight, waking him up, doing as much as possible to keep him from going back to sleep.  The effort would include anything from smoke bombs, music, banging of pots and pans, the dog peeing on the bed, to fireworks.  One  year we set the side of the house on fire, when a chain of M-80s shot up under the ceder shakes.  A good time was had by all.  There was a year I set off a confetti bomb.  One year my sister put the baby in the bed, and of course she over-flowed a dirty diaper.  Once we were sure he was wide awake, we left him alone.  The moment he was asleep, again, we would do it all over again.

This year, nothing is the same.  I’m home alone.  My mother is in Memphis.  Dustin, my nephew, is marrying Meredith Heath tomorrow.  They’re having a rehearsal dinner tonight.I think the way we look at it, now, it’s just one more milestone we need to pass to keep my mother alive.

Something quite odd happened about a week after he died.  Since the mid-1980s, I’ve been looking for his military records.  He was in the Merchant Marines during WWII.  His records were in one of the archives that burned. Nothing could ever be found of them.  About a week after he died, I was in his office, looking for something.  On his desk was a large plastic bag, about three inches thick.  Inside it was every single military record, pay records, training, recommendations, pass port, you name it.  Every thing was there.  No one put  it there.

We will muddle through.  My sister is a wreck, being Mother of the Groom.  Our mother is hanging in by her fingernails.  I’m getting a color.  Life goes on – I hope.

The night before he died, we were battling with him to get him to eat.  He nibbled, was a little agitated.  While I was clearing the table, after spending several hours cooking, he wanted to pray.  He sat at his place, “I have decided to follow Jesus, no turning back, no turning back.”  Those were his last lucid words.

The Lord is good.  My father never lost  his dignity.  He never lost who he was, even when we were well into Stage 6 of the disease. He spent his entire life following Jesus, never turning back.