Today is the last “official” day of winter!  Pitchers and catchers begin reporting tomorrow.  Our long winter nightmare is over.  In just a few short hours, the world will be beautiful again.  Baseball, with all its flaws, will be back!

The Pink Flamingo is going to go back to the old pattern of a daily wrap-up for the blog.  I miss not doing it.

I don’t know if I am happy with the current format.  If you were on-line anytime today you may have experienced some “changes” as I played with different themes. I bought one from the same company as this theme.  I’m playing with it.

Note to Stephen Maloney:  I did not get to the article I promised to write.  I will do so manana!

My most recent Blog Critics article has been posted;  The Kill the Elderly Stimulus Bill 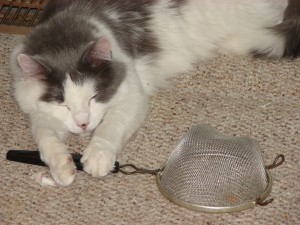 An Exhausted Bat Masterson Helps with the Redecorating

The redecorating continues.  My contractor was unable to work yesterday due to the weather.  Home Depot did deliver the rest of my flooring and the new doors.  Naturally this morning it was way too cold to change out the doors.  Jody brought a dozen boxes of flooring in and left them in my entry so they could acclimate to the condo temp.  Last week was warm enough that we could leave things outside.  Not any more!

This afternoon I finally manged to put everything back in place in the kitchen.  We redid my “grocery pantry”.  I have a wood floor now, along with a new stove and microwave.  My dining room was an absolute disaster piled with things from various spots in the kitchen.  As you can see by the above photo, Bat Masterson is exhausted from helping.

Mommy Cat has moved the little ones back to my bedroom.  We shall see what happens tonight between she and Rumsfeld.

THE CHAMBERS BOOK OF DAYS

Cædmon is the most ancient English poet whose name is known. He lived in Northumbria, near the monastery which, was then called Streaneshalch, but which has since been known by the name of Whitby. The name of its abbess, Hilda, is known to every one acquainted. with Northern legend and poetry.

It was a favourite custom of the Anglo-Saxons to meet together at drinking-parties, and there, in. the midst of their mirth, the harp was moved round, and each in his turn was expected to sing or chant some poem to the instrument—and these, as we may gather from the story, were often the composition of the singer, for the art of composing poetry seems to have been very extensively cultivated among our Saxon forefathers. Now the education of Cædmon, who was apparently the son of a small landholder, had been so much neglected that he had been unable either to compose, or to repeat or sing: and when on these occasions he saw the harp approach him, he felt so overwhelmed with shame that he rose from his seat and went home. An important part of the wealth of an Anglo-Saxon landholder at this time—the events of which we are speaking occurred in the latter half of the seventh century —consisted in cattle, and it was the duty of the sons or retainers of the family to guard them at night: for this could not be done by the agricultural serfs, as none but a freeman was allowed to bear arms. Now it happened on one of the occasions when Cædmon thus slunk from the fosstive beer-party (gebeorscipe) in disgrace, that it was his turn to guard the cattle, and proceeding from the hall to his post, he laid himself down there with a feeling of vexation and despondency, and immediately fell asleep.

In his slumber a stranger appeared to him, and, addressing him by his name, said, ‘Cædmon, sing me something.’ Cædmon answered, ‘I know nothing to sing, or I should not have left the hall to come here so soon.”Nay,’ said the stranger, ‘but thou hast something to sing!’ ‘What must I sing?’ said Coalmen. ‘Sing the Creation,’was the reply. Cædmon immediately began to sing verses ‘which he had never heard before,’ and which are given in Anglo-Saxon in some of the old manuscripts. When he awoke, he was not only able to repeat the lines which he had composed in his dream, but he went on at will in the most excellent poetry. In the morning he presented himself before the reeve, or bailiff, of Whitby, and informed him of his miraculous gift of poetry, and the reeve took him to the abbess Hilda. Hilda and a number of high and pious ecclesiastics listened to his story, and witnessed his performance, after which they read. to him a short portion of the Scripture in Anglo-Saxon, and he went home, and on his return next morning he repeated it in Anglo-Saxon verse, excelling in beauty everything they had heard before. Such a heaven-horn poet was a prize not to be thrown away, and Cædmon yielded to Hilda’s earnest solicitations, and became a monk of her house—for the early Auglo-Saxon nunneries contained monks and nuns in the same establishment. He was here employed by the pious abbess in translating into Anglo-Saxon verse the whole of the sacred history. Bede gives an affecting account of Cædmon’s death, which took place about the year 680. He was regarded as a saint by the Anglo-Saxon Church, and his death is placed in the Anglo-Romish Calendar on the 11th of February, but there is no known authority for fixing it on that day.

Cædmon is, indeed, only known even by name through his story, as told by the historian Bede, who was almost his contemporary, or at least lived only a generation later, and it would have been perhaps no more thought of than other legends, but for a rather curious circumstance. The celebrated Archbishop Usher became possessed of an early manuscript of Anglo-Saxon poetry, which he afterwards gave to Junius, a distinguished Anglo-Saxon scholar, and it proved to be a paraphrase in Anglo-Saxon verse of some parts of the Scripture history, bearing so many points of resemblance to the works of Cædmon, as described by Bede, that Junius did not hesitate to print it under Cædmon’s name (at Amsterdam, in 1655). One excellent edition, with an English translation, has since been printed by Mr. Benjamin Thorpe. The original MS. is now among Junius’s manuscripts in the Bodleian library, at Oxford. The earlier part of this poetry, containing the history of the Creation and of the fall of man, is much more poetical than the rest, and may very probably be the same which, in Anglo-Saxon times, was ascribed to Cædmon, though it bears no name in the manuscript. The story of the temptation and fall is told with great dramatic effect, and in some circumstances bears such close resemblance to Milton’s Paradise Lost, that it has been supposed that the latter poet must have been acquainted with the poetry of Cædmon, though the latter was printed by Junius in a very unreadable form, and without any translation.