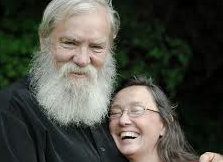 Debi and Michael Pearl make around two million bucks a year, advocating the beating of children and the subjugation of women.

“...”Delithia Gross said she was encouraged by church members to discipline and spank her children until they stopped crying…The wives of the church elders would tell us that you could know you’ve broken a child’s spirit, that he has repented, by the sound of his cry, like he is almost out of breath,” Gross said…They would say, ‘You can tell, you can tell,’ when the spirit is broken. They would recommend that you use a wooden spoon,” she added…I didn’t go to discipline night because I thought it was disgusting,” said one ex-CGI member who asked that her name not be used. “The elder’s wives would tell us to keep spanking the child, even if you left black and blue marks, until you break the spirit,” she said…Crying is called rebellion. The idea is that if the child is crying, you beat him, discipline him until he stops crying,” said former GCI member Keith Cingel.”…”

“…My abuser loved me and hugged me, and he overflowed with explanations. I once got an hour-long lesson on disobedience for leaving a crayon on the floor. While the belt clapped with the measured rhythms of chopping firewood, I struggled to commit verses to memory and to answer quizzes on the metaphysical meanings of the wordhonor in scripture. Afterward, I was too sore to sit or lie down….”

“…Which by the way, are NOT in Scripture… nowhere in Scripture does it say men have to have their hair trimmed around their ears and can only wear it in a “conservative” parted-on-the-side 1950’s style, or that men should wear collared shirts, and the rest! Why do we even focus on such stupid things? But in ATI, a LOT of focus is given to such things! You will learn that there is literally NO area of life about which Bill doesn’t have a teaching! Including what kind of toys your kids should play with, your health care, your leisure time, music, business plans, how to bake bread, clothing styles, keeping the O.T. dietary laws, circumcision (don’t even get me started on that one…), sex between a husband and wife, social dancing, acceptable ways for young men and young women to talk to each other (pretty much try to avoid talking to the opposite gender unless you have jumped through all kinds of hoops and are practically engaged already… forget about having opposite gender friends!) all kinds of things! Eventually, my brother totally rebelled and not just against ATI, he threw the whole package out… Christianity and the Bible too. He made some really bad decisions and ended up spending some time in jail. In spite of the fact that my parents sheltered him as ATI taught and he was homeschooled from preschool to the day he more or less ran away from home and joined the party scene. I believe that having healthy, open, respectful and loving relationships with our kids, and setting a good example to them of Christ’s love and grace, is a much better way to raise kids who will love the Lord, rather than focusing on conforming to and teaching a set of principles. Remember, it says in Scripture that we will be known as His disciples by our love for one another… it doesn’t say “By this shall all men know that ye are my disciples, that ye all listen to melodious music and wear conservative clothing and live by the 7 Basic Principles”….”

“...Egalitarian couples “preach a false gospel” by viewing men and women as equal partners in marriage, the Southern Baptist Convention’s top expert on family concerns says in an interview posted on his agency’s website.

“God designed us in such a way where we learn about him through family relationships,” Ethics and Religious Liberty Commission President Russell Moore said in a wide-ranging interview with Mark Dever of 9Marks Ministries in Washington, D.C. “We learn about the nature of reality in family relationships, and in terms of what it means to image God, by being faithful fathers and husbands and mothers and wives.”

“Often, I think, the gospel is obscured because God has designed a picture of the gospel in the one-flesh union of husband and wife,” Moore said of his long association with the Council on Biblical Manhood and Womanhood in Louisville, Ky. “When that is broken down, you have a false gospel that is being preached.”

“And sometimes you have people who are preaching a false gospel to themselves in their homes by men who aren’t loving their wives as themselves and wives who aren’t submitting to their husbands,” he said. “That then plays itself out in other ways later on in that person’s walk with Christ.”

“…My re-deconversion began at a Wednesday evening church service. Children were told to remain with their parents, rather than leaving for Sunday school. An associate pastor then used his Father’s Day speaking slot to explain the process of cutting and sanding your own wooden paddles. Parents didn’t have to worry, he explained, because the handles would break off if you hit your children too hard. Paddling could leave marks, but if you hugged your kid afterward, that was fine. I sat in the pew, heart racing. It was the lesson that my childhood pastor had given, thirty years ago. It was why I’d thought being beaten into submission was normal. It was the reason I’d never complained to anyone. My uncle had convinced me that our old church was strange. He’d insisted that in all his years, he’d never heard anything like it. But here were the same lessons, preached to a six-thousand-member congregation….”

Michael Pearl, on his web site, wrote about the systematic teaching of a father to abuse his two son.  It is horrific to read.  This is child abuse.  The father should have been taken to jail.  Michael Pearl should be in prison for what he has advocated.

“…Mother was reaching for her baby when the father turned to me and asked, “What should I do?” Again I explained the principle: by allowing the child to dictate terms through his whining and crying, you are confirming his habit of whining and consenting to his technique of control. So I told the daddy to tell the boy that he would not be allowed to sit in his mother’s lap, and that he was to stop crying. Of course, according to former protocol, he intensified his crying to express the sincerity of his desires. The mother was ready to come up with a compromise. “He was hungry. He was sleepy. He was cold.” Actually, he was a brat, molded and confirmed by parental responses. I told the father to stop the car and without recourse give him three to five licks with a switch. After doing so the child only screamed a louder protest. This is not the time to give in. After two or three minutes driving down the road listening to his background wails, I told the father to COMMAND the child to stop crying. He only cried more loudly. At my instruction, without further rebuke, the father again stopped the car, got out, and spanked the child. Still screaming (the child, not the rest of us), we continued for two minutes until the father again commanded the child to be quiet. Again, no response, so he again stopped the car and spanked the child. This was repeated for about twenty miles down a lonesome highway at 11:00 on a winter night.

When the situation began to look like a stalemate, the mother suggested that the little fellow didn’t understand. I told the father to command the boy to stop crying immediately or he would again be spanked. The boy ignored him until Father took his foot off the gas, preparatory to stopping. In the midst of his crying, he understood the issues well enough to understand that the slowing of the car was a response to his crying. The family was relieved to have him stop and the father started to resume his drive. I said “No; you told him he was to stop crying immediately or you would spank him; he waited until you began stopping. He has not obeyed; he is just beginning to show confidence in your resolve. Spank him again and tell him that you will continue to stop and continue to spank until you get instant compliance.” He did. The boy was smart. He may not have feared Mama. His respect for Daddy was growing, but that big hairy fellow in the front seat seemed to be more stubborn than he was, and with no guilt at all. This time, after the spanking, when Daddy gave his command, the boy dried it up like a paper towel. The parents had won, and the boy was the beneficiary.

Michael Pearl’s work is responsible for the deaths of several innocent children.

“…The Pearls’ “Christian” guide recommends that parents spare no abuse corrective measures in ensuring that their children are obedient, unthinking, complacent drones well-behaved.  The brutal methods described in this book have enraged sensible people nationwide  since the deaths of Lydia Schats (2010), who died after “several hours” of spanking, and Sean Paddock (2006), who suffocated as a result of being wrapped tightly in blankets.  Hana Williams (2011) is the latest to find justice as a victim of a couple of maniacs’ strict adherence to a book that advocates abuse as a means of breaking a child’s spirit. The Pearls, on their web site, advocate disciplining children with 1/4” plumbing supply line from the local hardware store–even keeping a length of it in each room to reinforce the fear.  The Pearls warn to “be careful about using it in front of others–even at church; nosy neighbors might call social workers.”  The plumbing supply line is recommended because it reduces the chance of leaving evidence (bruising)…”

The problem is there are thousands of people who believe this stuff.  You might want to read a few of their comments.  I used the term “Christian” here.  What the Pearls have produced is part of Christian Reconstructionism, a bastardized version of Christianity that has nothing to do with the Bible.  They are an embarrassment to normal, decent Christians, everywhere.

RSS feed for this post (comments)
Previous Post« Wednesday’s Hero – Maj. Thomas McGuire Jr.
Next PostPART I: Oppression of Women Is Godly or Something Else »
The Pink Flamingo
Bombax Theme designed by itx
﻿﻿﻿﻿﻿
WordPress SEO fine-tune by Meta SEO Pack from Poradnik Webmastera