“You Talk About Things That Are Important”

“…”I only regret you’re repeating it day in and day out. When you give a speech you don’t go through a laundry list, you talk about the things that you think are important and I described in my speech, my commitment to a strong military unlike the president’s decision to cut our military.”…”Mitt Romney

Oh, wait, Mitt Romney insulted the UK when he was there to show everyone how badly the UK was bungling the Olympics.  He insulted Prince Harry’s grandmother.  He insulted the PM. Now he’s insulting our troops in the field.  I guess his encore will be starting a war with Russia.

Our brave heroes serving our country may not be worth his discussion, but he does think corporations are our friends.

“When you give a speech, you don’t go through a laundry list you talk about  things that are important..”

In other words Mitt Romney doesn’t give a damn about our troops.  He then went on to say that he mentioned them by calling them “military”.  Would someone please tell me what the H – E – Double toothpick is going on here. 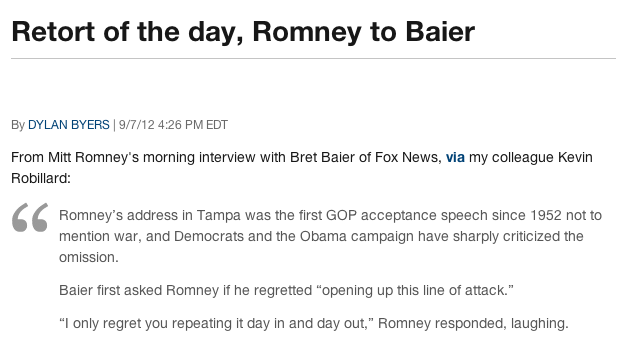 This is pure arrogance.  The worst of it, with the exception of Bill Krystol, almost EVERY other conservative is allowing him to get away with it.  They should be hanging their head in shame.  Just don’t go discussing how patriotic they are.  They’re not.  It’s all a big fat Mitt Romney style lie.

This is no longer my Republican Party.  The GOP I know supports our military, even during the worst of times.  They take great pride in their support of the military.  It is a matter of honor.  Now, though, there is no longer any support.  There is no honor.  Their is only Mitt Romney and his lies.